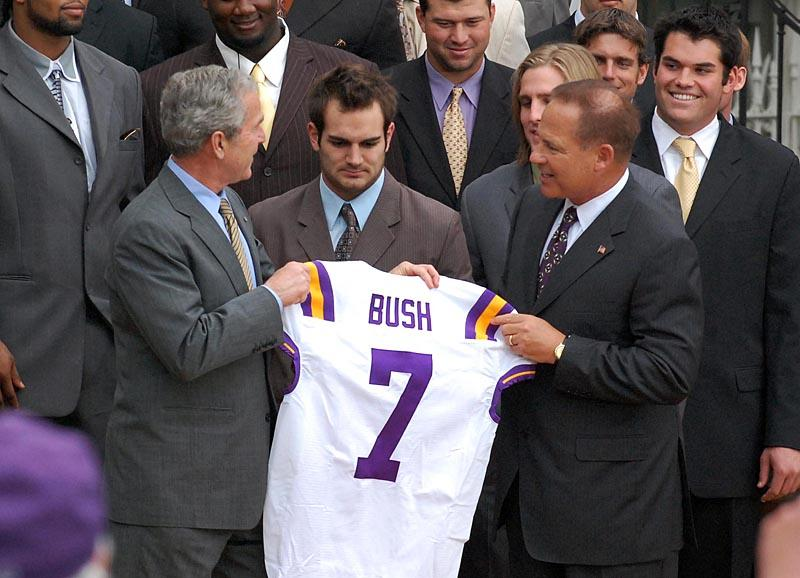 BATON ROUGE — “This is your captain speaking; we have just touched down in Baton Rouge, home of the National Champion LSU Tigers.”

I can still hear the words and the overwhelming feelings that rushed through my head when I realized everything that had just gone on.  We just arrived back home from Washington, D.C., where we met with President George W. Bush and saw all the great sites our nations capitol has to offer.

Something about being up close and personal with the most powerful man in the world gives you a new respect for the hardest job in the world.  It was a surreal feeling to be standing just a few feet behind the man who runs our country and makes decisions that affect millions everyday, while constantly fighting for our freedoms that many of us take for granted.  These brief few minutes are something that I will indeed cherish for many years to come and something that I will never forget.

Upon exiting the White House I was fortunate enough to meet up with my parents, who happened to be in attendance for our National Championship Celebration on the South Lawn of 1600 Pennsylvania Avenue.  It was really good to see them and was really glad they got to take off from work and come down for this historic day in LSU history.

Being from the suburbs of this great city, I had seen all the sites growing up, but to do it with my teammates was really unique.  For most of them it was their first time to take in Washington and I loved answering all their questions as to what everything was and pointing out things along the way.

The Washington Monument, Lincoln Memorial, WWII Memorial and Vietnam Memorial were just a few of the things we got to take in on our walking tour.  After about two hours we loaded up the buses and headed to our hotel.  After a quick 15 minute drive we arrived at the Westin Hotel in Fairfax, Virginia, which is just across the Potomac River.  We got our luggage and quickly checked into our rooms.  After unpacking everyone met downstairs in one of the ballrooms for dinner and some nightly entertainment, where we cheered on the men’s basketball championship game before retiring for the night.

“Beep, beep, beep!!!”  Before I knew it the alarm in our room was going off and it was time to get up at 6:30 a.m.  About 10 of my teammates and I were selected to go down to the Military Hospital and meet with some of the troops who were fighting overseas and currently recovering from injuries they had sustained.

When I first learned that I was going to be able to meet with my hero’s, the men and women who fight for this country, I quickly knew it was going to be one of the best experiences of my entire trip and it did not disappoint.  Exchanging stories and being able to meet with these brave American’s made my entire day.  It was an awesome experience and one that I would encourage everyone to do if ever given the chance.

However, it wasn’t before long that we were instructed that time was up and it was off to our next stop.  We picked up the rest of our travel party from the hotel and headed off to the Pentagon for a tour.  We saw the touching 9/11 Memorial and learned that 23,000 people work in our nation’s defense building everyday.  Next, we took in Arlington National Cemetery, where they had the changing of the guards, JFK’s eternal flame and the tomb stones of all the brave soldiers who fought in battle for this country since this country was formed over 200 years ago.  Finally, we ended our trip with a tour of the U.S. Capitol before heading back to the airport where we caught our flight back our own capital city.

It was a great trip and I couldn’t have thought of any other way I would like to spend our last official team event for the 2007 squad.  As always, GEAUX TIGERS!