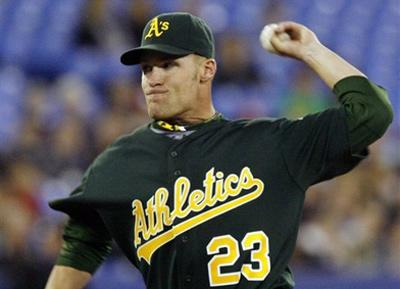 Smith, making just his second MLB appearance, worked seven innings, limiting the White Sox to one run on six hits with one walk and four strikeouts.

Smith was the sixth-round draft pick of the Arizona Diamondbacks in June 2005, and he was traded to Oakland in December 2007. He made his MLB debut April 9, 2008, at Toronto.

LSU has produced 42 MLB players since 1985, including 23 pitchers and 19 position players.

CHICAGO — Under most circumstances, a rookie pitcher throwing to a catcher in his first full year as a starter against a red-hot and power-packed lineup isn’t an ideal setup. Not so for Oakland’s battery of 24-year-olds, former LSU lefty Greg Smith (2003-05) and Kurt Suzuki, on Monday night.

Former Team USA teammates, Smith and Suzuki led the A’s to a tense 2-1 victory over the White Sox in the opener of a two-game series at U.S. Cellular Field.

Smith, acquired from the Diamondbacks in an eight-player deal that sent former A’s ace Dan Haren to Arizona in December, was brilliant throughout his seven innings of work to earn his first Major League win. In addition to guiding Smith through Chicago’s juggernaut of an offense, Suzuki put together the first four-hit game of his career.

“He was the first guy I called after the trade,” Smith said. “We played together in the fall of 2006 in a pre-Olympic qualifier down in Cuba, so we kind of formed a friendship there. It’s been great to start that up again.”

Read the full article on MLB.com.