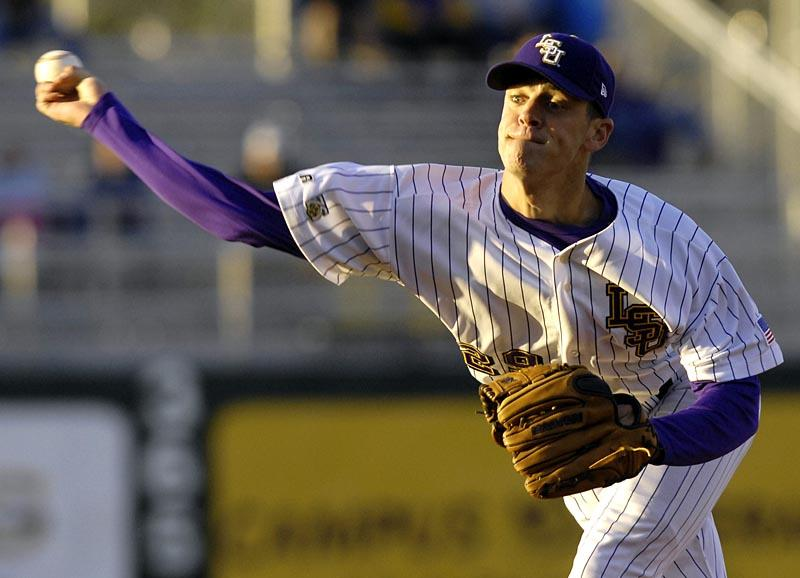 The Tigers will play their first home game since April 6 after completing a four-game road trip last week at Southern Mississippi and Ole Miss.

The LSU-Nicholls State game can be heard on the affiliates of the LSU Sports Radio Network, including flagship station WDGL 98.1 FM in Baton Rouge. Live video and audio are also available in the Geaux Zone at www.LSUsports.net.

LSU will play at UNO at 6:30 p.m. Wednesday before resuming Southeastern Conference action versus Georgia this weekend in Alex Box Stadium.

“Every game is extremely important as we move toward the end of the regular season,” said LSU coach Paul Mainieri. “We’re looking forward to being back in Alex Box Stadium to play in front of our fans. This is another big week for us, and our players are excited about being at home for four of our five games this week.”

Mainieri said that junior right-hander Louis Coleman (1-0, 2.08 ERA) will start on the mound Tuesday versus Nicholls State. Coleman, who will make his third start this season, had recorded one walk and 17 strikeouts in 13 innings.

LSU sophomore second baseman Ryan Schimpf drove in six runs in the Tigers’ four games last week, as he hit .353 (6-for-17) with two doubles and three homers. His first homer of the week was a grand slam to highlight a six-run fourth inning at Southern Miss last Wednesday.

Schimpf hit two solo homers and a double and scored three runs in the Tigers’ series at Ole Miss.

Freshman catcher Micah Gibbs enjoyed the best offensive day of his LSU career Sunday at Ole Miss as he was 3-for-5 at the plate with one homer, four RBI and two runs. Gibbs’ homer ? a solo shot to lead off the sixth inning and extend LSU’s lead to 4-2 ? was the first dinger of his collegiate career. Gibbs batted .400 (4-for-10) in the Ole Miss series with one double, one homer, four RBI and three runs scored .

Verdugo recorded the first complete game of his LSU career Sunday in the Tigers’ 8-2 win at Ole Miss. Verdugo wasn’t scheduled to start the game; however, when right-hander Jared Bradford encountered problems with a blister on his hand during pregame warm-ups, Verdugo was called into action just minutes prior to first pitch. He responded with an tremendous outing, limiting the Rebels to two runs on three hits in nine innings with two walks and two strikeouts.

Verdugo’s complete game was the second by an LSU pitcher this season ? the other was recorded by Bradford at Florida on March 30. Verdugo also started last Wednesday’s game at Southern Miss and pitched three shutout innings in the Tigers’ victory. For the entire week, Verdugo worked 12 innings and posted a 1.50 ERA, allowing just two runs on five hits with three walks and five strikeouts

Brown turned in his best outing of the season on Friday at Ole Miss as he limited the Rebels to just one run on six hits in seven innings with no walks and eight strikeouts. Brown was not involved in the decision of the Rebels’ 2-1 win.

Infielder Anthony Wray is batting .263 with five doubles, one homer and a team-best 20 RBI. The Colonels are hitting .244 as a team, and they have collected six homers on the year.

LSU leads the overall series with Nicholls State, 43-21, as the squads first met in 1968. The Tigers have won 16 straight games against the Colonels, including an 8-3 win last season in Alex Box Stadium.

RANKINGS
Neither team is ranked