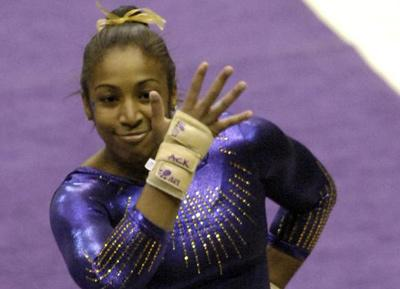 The program, held in the Carl Maddox Fieldhouse on Sunday afternoon, recognized African-American students from each college on campus that excels both inside and outside the classroom.

Clare-Kearney, the SEC Co-Gymnast of the Year, was given the award for her leadership in the gym, as well as her work in the community and her work in the classroom. Along with her teammates, Clare-Kearney has visited Children’s Hospital and raised money for breast cancer awareness. During the first annual Etta James Memorial Meet, the gymnastics team helped raise $30,950 for breast cancer awareness.

Additionally, the junior from Manchester, Conn. teamed up with former LSU center Shaquille O’Neal to help build a playground for Polk Elementary school.

“Ashleigh’s strength is not only in her athleticism but in her ability to lead her team,” said LSU head coach D-D Breaux. “She is a positive source of energy encouraging and driving her teammates to excel not only in competition, but in their community commitment as well.”

Huel Davis Perkins is a native of Baton Rouge and a graduate of Southern University. He holds Master and Doctoral degrees from Northwestern University in Evanston, Illinois.

Clare-Kearney led her team to the NCAA Central Regional Championship title on April 12, posting a career-high 39.825 in the all-around. She tied her career high on the vault with a perfect 10.0 score. LSU qualified for the NCAA National Championships, held in Athens, Ga. on April 24-26.