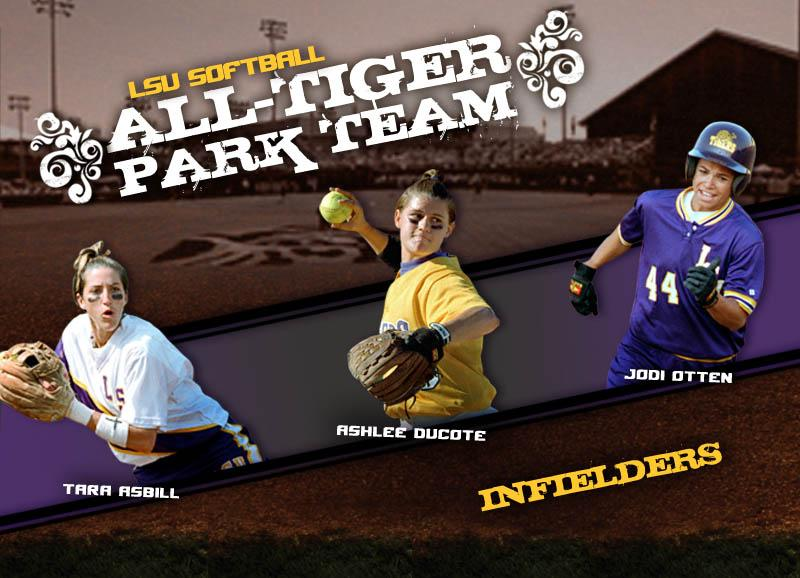 BATON ROUGE — In celebration of the final season of Tiger Park, Tara Asbill, Ashlee Ducote and Jodi Otten were named to the All-Tiger Park team for the infield.

Over the final four weeks of Tiger Park, the LSU softball team will announce 12 members of the All-Tiger Park team. Last week, the three members of the outfield ? LaDonia Hughes, Leslie Klein, and Trena Peel – were announced. The catcher, designated player and utility selection will be announced on Friday, April 18. The final honorees, the three pitchers, will be announced on Friday, April 25, prior to the start of LSU’s final regular season home games in Tiger Park.

A four-year letterwinner from 1997-2000, Asbill was a third-team All-American in 2000 and LSU’s first academic All-American. The shortstop was also a three-time first-team All-SEC selection and a member of the 1998 NCAA Regional All-Tournament team and 1999 SEC All-Tournament team. The native of Elgin, S.C., still ranks in the top three in career runs scored, hits, home runs and RBIs in LSU history.

A four-year letterwinner from 1997-2000, Ducote was a two-time All-American, earning first-team honors both seasons. The 2000 SEC Player of the Year, the third baseman was also named the 1999 LSU Female Athlete of the Year. A three-time All-SEC selection, the native of Alexandria, La., still holds many of the Tiger career and single-season batting records, including batting average, slugging percentage and RBIs for a season and batting average for a career.

A two-year letterwinner from 1997-1998 after transferring from Central Arizona College, Otten was an All-America selection in 1998, LSU’s first All-America selection in school history. The former second baseman was also the 1998 Louisiana Player of the Year after being named the 1997 Louisiana Newcomer of the Year. The native of Mesa, Ariz., held the LSU triples record for four years and still ranks with the second most single-season triples in school history.