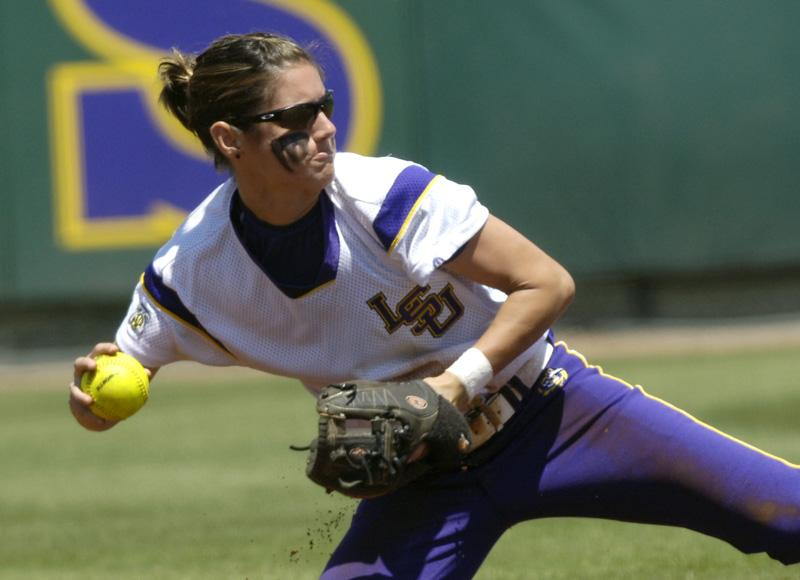 With the loss, the Tigers drop to 32-12 on the season and 11-8 in Southeastern Conference play. The Rebels improve to 19-24 overall and 3-17 in league action. LSU now sits a half game behind Tennessee in fourth place in the overall SEC standings and second in the SEC Western Division behind Alabama.

“We told the team that these are their memories and they have to figure this out,” said LSU head coach Yvette Girouard of the Tigers’ recent struggles. “All credit to Ole Miss. They threw the same girl against us for almost 18 innings and we didn’t make any adjustments. If you play like this, you are going to get beat. Ole Miss was just better than us for two games.”

An unearned run in the top of the third put Ole Miss on the board. An error, two walks and a sacrifice fly plated the first run, which, oddly enough, came in the middle of a double play. Michelle May then hit a solo home run with two outs in the top of the sixth to score the only other run of the contest.

Dani Hofer started and took the loss for the Tigers, falling to 18-6 on the season. She allowed two runs, one earned, on four hits with four walks and six strikeouts. All four of LSU’s hits came in separate innings as the Tigers did not have more than one runner on base at any time in the game.

“Dani is expected to carry this team and she’s not quite doing that right now,” said Girouard. “I think the batters press when they see the circle struggling, but that’s why the players are in the line-up – to hit. There are no excuses for this.

“We’ve got to find our swagger again,” said Girouard. “We lost it at some point. I think that since the loss at Alabama when they came back on us three times, we haven’t been quite the same.”

The one bright spot in the line-up continues to be Rachel Mitchell. The sophomore extended her hitting streak to 10 games, the longest of her career. For the weekend, she finished 7-for-10 with a double and two runs scored and, adding the two mid-week games at Kentucky, went 11-for-17 for the week with a double, home run, three RBIs and four runs scored.

Coming out for the third straight game, the Rebels’ Becky Nye earned the win to improve to even her record at 8-8 on the year. She scattered four hits without a walk and recorded two strikeouts. Nye pitched the final 17 and two-thirds innings for Ole Miss. After allowing four runs and four walks in her first three and two-thirds as part of game one, she settled down and gave up only one run without a walk in the two games.

In the top of the first, Ole Miss put runners on second and third one out. Two of the Rebels’ four hits in the game came as part of the frame. Courtnie Ghinaudo led off with a bloop single to left field. She was out at second on a fielder’s choice by Lauren Grill, on an outstanding diving play by Tayl’r Hollis at shortstop. Lisa Conchos then singled through the left side. Grill and Conchos advanced to second and third on a wild pitch. Hofer then settled down and got Ashley Dowdy to strike out looking and Amber Tramp to fly out to center field.

The Tigers got a pair of singles in the first and second inning. Mitchell got a two-out hit through the right side in the first inning. A ball driven deep by Killian Roessner was unfortunately not quite deep enough and caught on the warning track in left field to end the inning. Erika Sluss got a two-out infield single in the bottom of the second, but Hollis fouled out to third base the end the inning.

Ole Miss got on the board in the top of the third. Ghinaudo reached with one out on a Tiger error and then moved to second on a wild pitch. LSU intentionally walked Grill, who had two, three-run home runs on Saturday, and walked Conchos to load the bases.

On a deep fly ball to center field by Ashley Dowdy, Ghinaudo held up at third before deciding to tag and go home, which made a play at the plate relatively close. With Ghinaudo attempting to score, Grill tried to advance to third. After Ghinaudo slid in safe at the plate, Roessner threw out Grill going to third to end the inning.

LSU had its first and only runner in scoring position in the bottom of the fourth. With one out, Roessner doubled down the left field line. Quinlan Duhon, who was unlucky at the plate all game, hit the ball on the nose, but directly at the right fielder for the second out and Jessica Mouse grounded out to third for out number three.

The Rebels got an insurance run in the top of the sixth. With two outs, May hit a 2-1 pitch over the fence just inside of fair territory down the left field line to extend Ole Miss’ lead to 2-0.

The Tigers’ final hit of the game came on a two-out single up the middle by Mitchell. It marked her fourth multiple-hit game of the week and team-leading 15th of the season. However, Roessner grounded out to second base to end the inning as LSU did not have another player reach base the remainder of the game.

The Tigers return to action at home this week as LSU hosts Nicholls State on Wednesday at 6 p.m. at Tiger Park. It will be the Tigers’ final regular season mid-week game as LSU has only four regular season games remaining.

LSU will then return to SEC play on the road as the Tigers take on No. 10 Tennessee in Knoxville. The three-game series begins with a doubleheader on Saturday at noon CDT and concludes with a single game on Sunday at noon CDT. The first and third games of the series will be televised on Fox Sports in Baton Rouge on cable channel 38.