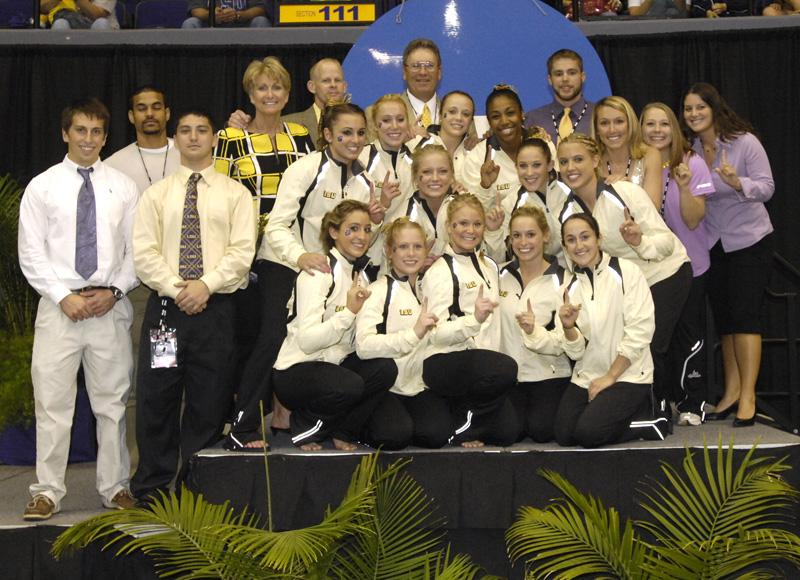 BATON ROUGE — The seventh-ranked LSU gymnastics team posted the fifth-highest score in team history and junior Ashleigh Clare-Kearney had the best performance of her career as the Tigers punched their ticket to the NCAA Championships by winning the Central Regional title Saturday night at the Pete Maravich Assembly Center.

Clare-Kearney won the all-around title for the ninth time this season and 16th time of career with a career-best all-around score of 39.825. The Manchester, Conn., native’s score is tied for the second highest in school history.

Clare-Kearney took first place on vault, beam and floor. The first-team All-SEC selection’s career night was highlighted by her perfect 10.0 score on vault.

“I was satisfied with the performance and the score tonight,” LSU head coach D-D Breaux said. There is still room for improvement to be able to take it to the next level. What we did tonight will stack up well against the other top teams in the country.

“What happen tonight was fitting because you had the fifth and sixth best teams in the country. Exactly what happened should have happened. We knew that it was going to be neck-and-neck the whole meet. In my 31 years it was by far the best team performance that I’ve been a part of.”

LSU and Kent State were tied with the lead after the first rotation as they each scored a 49.275 in their respective events.

The Tigers began the night on bars to take the early lead behind six performances of 9.775 or better. Summer Hubbard led all LSU competitors and finished second overall with a score of 9.925. Clare-Kearney finished third after posting a solid score of 9.90.

LSU took the lead after the second rotation behind Clare-Kearney’s beam title. Clare-Kearney scored a career-high on beam with a 9.975. The CO-SEC Gymnast of the Year earned perfect 10.00 scores from two of the four judges in the event. Along with Clare-Kearney, four other Tigers posted scores of 9.800 or better to help give LSU its season high score (49.325) on beam.

The Cardinal stole the lead from the Tigers after the third rotation as it posted a meet-best 49.500 on beam.

In the fourth rotation, LSU competed on bars where Clare-Kearney, Jackson, and Sabrina Franceschelli each posted a score of 9.850 or better to help give LSU a 49.275 in the event.

The Tigers and the Cardinal were tied at 148.00 heading into their final event. LSU sealed their incredible performance by tying the highest vault score in school history with a 49.625 mark.

Clare-Kearney’s 10.0 mark wasn’t the only strong vault performance for LSU as three other Tigers posted a score of 9.900 or better. Staci Schwitki posted a career-high and tied for fourth by scoring a 9.900.

Teams from five other regionals across the country that have advanced to the championships include: Florida and UCLA (Southeast Regional); Utah and Arkansas (North Central); Georgia and Denver (Northeast); and Alabama and Oklahoma (South Central); Michigan and Oregon State (West).

After afternoon and evening six-team preliminary sessions on April 24, the “Super Six” team final takes place on April 25 at 6 p.m. CDT, with the individual event finals on April 26 at 6 p.m.

Individual (Winner plus all LSU competitors)

On the meet…
“I was satisfied with the performance and the score tonight. There is still room for improvement to be able to take it to the next level. What we did tonight will stack-up well against the other top teams in the country. What happen tonight was fitting because you had the 5th and 6th team in the country. Exactly what happened should have happened we knew that it was going to be neck and neck the whole meet. In my 31 years it was by far the best team performance that I’ve been a part of.”

On the crowd…
“What happen to us tonight was what we see happen to Alabama and Georgia. It was so nice for this group of young ladies to be on the receiving end tonight. To be rewarded so graciously for outstanding performance it was a huge part of our success tonight.”

On the importance of the meet…
“I wanted to come out and compete like I practice. I’ve been really working hard at practice on the little and I wanted to carry it on to nationals. As a team we have been doing that too. We have weights at 6:30 in the morning. At practice we are trying to be as prefect as possible and we are glad it has carried over today.”

On her perfect score on vault…
“It felt good. I can’t see so I really don’t know what it looks like. The feeling of getting a ten is amazing. I stepped up there and cleared my head during warm-ups. I tried to stay clam and the outcome was just great. It felt good to go out there and do what I knew to do.”

On the accomplishments of the team…
“I’m so proud of everyone on this team. Everyone has worked hard to get where we are and we still have much more work to do. We can still go in the gym and improve on the little things. There is always room for improvement and I think we should all be proud of ourselves. Last week we had a good performance at SEC, but it was not the best.”

On Stanford’s performance tonight…
“My team had an outstanding effort tonight. I was so proud of how they stayed together. We hit 24 routines, which is always one of our goals. LSU is a great team. It was a great atmosphere. I think it was the first time this year we’ve been in an SEC atmosphere, so that always adds a bit and brings the best out of the kids, but LSU had a great night. We opened the door a little bit on bars. Going into Nationals, I feel really good about where this team is and our chances for performing really well the next two weeks.”

On performing in the Nationals…
“So many things have to come together at the right time, but the beauty of this team is that every single person that competed last year in the ?Super Six’ returned. So, every single person from last year’s team will be competing at a National Championship this year. That type of experience cannot be replaced, so going in, we have the experience. We also have six seniors who have been through so much in this sport, so we have great leadership. I feel great about where we are going into this meet, and I know that there are definitely places we can improve in. We did not have the meet of our life. We still have many places that we can get better and skills we can add. Bars were rough for us in our first event. We’re a much better bar team than that. With all that said, I think our chances for being able to perform well in the preliminaries and move on to the Super Six look really good. We’ve had three Super Six appearances in the last five years, so that’s a pretty good track record.”

On the distractions in a meet like this one…
“Well, actually, we make a team goal to bring the focus on us. We don’t really watch the other teams. We don’t know what’s going on around us and the scores (of the other teams). We just really focus on the 17 of us. It isn’t very distracting when stuff is going on because we really just block it out and stay focused on what we have to do.”

On her performance tonight…
“I am just really happy with the performance of my team; they really set me up. I just did everything I could, and I’m pretty pleased with how I performed tonight.”