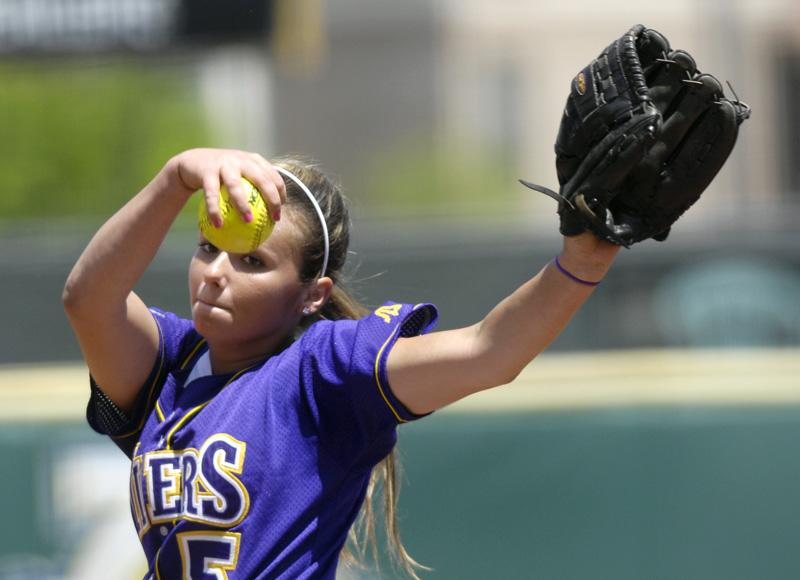 BATON ROUGE — Home runs cost the Tigers as the No. 12 LSU softball team split a Southeastern Conference doubleheader with Ole Miss, winning 8-5, before falling, 3-1, on Saturday afternoon at Tiger Park.

The split moved the Tigers to 32-11 on the season and 11-7 in SEC, dropping LSU to fourth place overall in the league. The Rebels moved to 18-24 overall and 2-17 in conference play. The pair will meet in the rubber match on Sunday at 1 p.m. The game will be televised on Cox Sports Television in Baton Rouge on cable channel 37.

“I tried to warn our team that Ole Miss’ record didn’t show how good they are,” said LSU head coach Yvette Girouard, “but when you look at the line scores and how many one-run loss games they have against some of the best teams in the conference it shows. It’s the same thing that happened to us over there last year too. We just struggle to play against them a little bit.”

Lauren Grill’s three-run home run in game two was the difference in the game as Ole Miss’ leading hitter recorded a pair of three-run home runs in the series. Despite out-hitting the Rebels, 7-6, in game two, LSU had several costly base running mistakes and could never get the timely hit with players on base until Quinlan Duhon came through with an RBI double in the seventh inning to break up the shutout. The Tigers stranded only three, but had eight base runners in the contest, with only one coming around to score.

“When you can’t keep the ball in the park and you have three base running mistakes and a general lack of focus at the plate, you usually get beat,” said Girouard. “I thought we hit the ball really hard at times, but we just didn’t have anything to show for it. Then, obviously, they have the one big blow. But shame on us because we let the best girl on their team beat us, which is the biggest no-no in pitching.”

The Tigers used four Rebel errors in game one to score three unearned runs, the difference in the game. LSU got a three-RBI triple by Casey Faile as part of a four-run first inning to put the Tigers ahead for good. After giving up two unearned runs in the first, pitcher Dani Hofer retired the next 13 batters before giving four-straight hits to start the sixth, including Grill’s first three-run home run. After Ole Miss cut the LSU lead to three, Hofer retired the final six batters in order to end the game.

Rachel Mitchell led the Tigers at the plate by going 5-for-7 with a double and two runs scored to extend her hitting streak to nine-straight games. Jazz Jackson and Killian Roessner each had three hits on the day, with Roessner recording two doubles and Jackson knocking in one run.

Hofer earned the complete-game win in the opener to improve to 18-5 on the season. She allowed five runs, three earned, on five hits with one walk and eight strikeouts. Cody Trahan took the loss for the Tigers in game two to fall to 11-4 on the year. She allowed three runs on five hits with three walks and six strikeouts in four and a third. Tiffany Garcia came on in relief and allowed only one hit with a walk and two strikeouts in the final two and two-thirds.

Ole Miss got on the board first in game one. With two outs, Amber Tramp reached on a throwing error by Erika Sluss as the ball rolled out into right field and allowed Courtnie Ghinaudo and Grill to score on the play for the early 2-0 lead.

LSU responded with four runs in the bottom half of the inning. With one out, Jackson walked and moved to second on a single by Mitchell. An infield single by Killian Roessner then loaded the bases. A sacrifice fly to center field by Duhon scored Jackson. Sluss walked to load the bases once again. Faile then tripled down the right field line, clearing the bases and giving the Tigers the 4-2 lead.

In the bottom of the fourth, LSU added two more runs. Jessica Mouse singled to start off the inning. On a fielder’s choice by Jackson, the throw from the pitcher sailed out into right center field, allowing both Mouse and Jackson to come around and scored.

The Tigers added two more in the bottom of the fifth. With one out, Tayl’r Hollis and Shannon Stein drew back-to-back walks. A single by Jackson scored Hollis from second. Stein advanced from second to third on a throwing error by the third baseman, who had Stein caught in a run down. Stein then scored on a throwing error by the catcher as she attempted to throw out Jackson who stole second.

After going down in order in the second, third, fourth and fifth, Ole Miss led off the top of the sixth with a single to left field by Ghinaudo. A double to left center by Lisa Conchos put runners on second and third. Grill then hit her first home run of the day to left field to cut the Tiger lead to three, 8-5. After allowing a single to Ashley Dowdy following the home run, Hofer retired the final four batters in order to end the game.

In the nightcap, LSU got a one-out single by Jackson in the bottom of the first. Jackson was then thrown out on a fielder’s choice by Mitchell. A double to left field by Roessner moved Mitchell to third, but she was thrown out at the plate attempting to score.

After failing to record a hit in the first two innings, Ole Miss got a two-out double by Conchos in the third to break up the no-hitter. A walk and hit by pitch then loaded the bases, but Tiger pitcher Cody Trahan got Tramp to pop up to the infield to end the inning.

In the bottom of the fourth inning, the Tigers missed another opportunity to get on the board first. Jackson led off with a single to left center field. She then stole second, but was thrown out attempting to steal third for the first out of the inning. The next batter, Mitchell, then singled up the middle on a ball that would have scored Jackson from second, but the game remained scoreless.

The big blow for the Rebels came in the top of the fifth. Alise Doubt led off with a single to left field. With one out, Conchos singled to right center field, moving Doubt to third. Grill’s second home run of the day came on a 3-2 pitch and left the park in left center for the 3-0 Ole Miss lead.

LSU got a one-out single by Dee Dee Henderson in the sixth. After Henderson stole second to become the fourth Tiger of the game to reach scoring position, she was doubled up on a pop out to the second baseman to end the inning. Garcia came on in relief of Trahan and retired eight of the 10 batter she faced, allowing only a leadoff double in the sixth and a walk in the seventh.

After throwing the final three and two-thirds of game one, Nye came back to start game two and picked up the complete-game win to improve to 7-8 on the season. She allowed only one run, while scattering seven hits. After walking four in her first appearance, she settled down and did not walk a batter in game two, while striking out four, including the final out, which also represented the tying run.