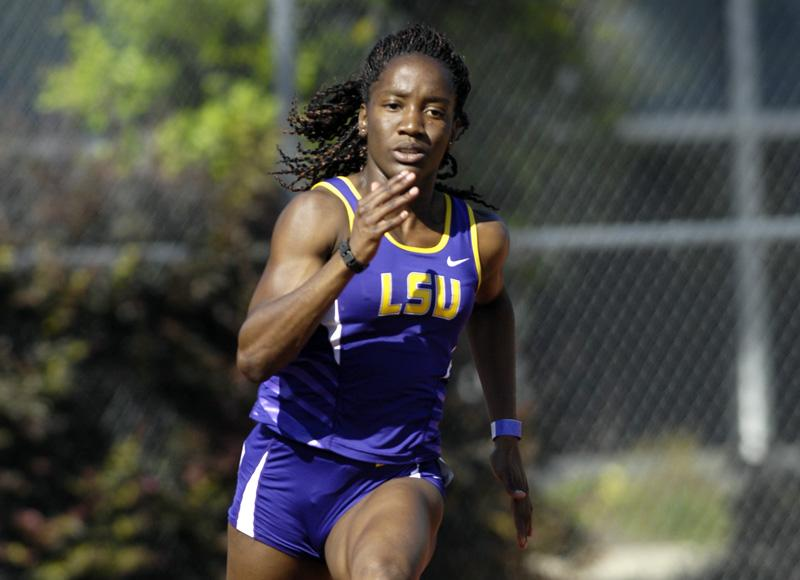 The Tigers and Lady Tigers have now combined for 49 individual qualifying marks and four qualified relay teams to the 2008 NCAA Mideast Regional Championships to be held May 30-31.

“This was really the first time this season where we’ve been able to focus all of our attention on regional qualifying performances,” said LSU head coach Dennis Shaver. “This was a chance for our athletes to really step up their performances, and I’m happy with their effort today.”

Wilson followed minutes later with her season debut in the 400-meter hurdles and blew away the competition with an opening time of 55.83, which was more than six seconds faster than her nearest competitor. Wilson also improved by more than one second from her opening time a year ago when she clocked a 56.99 in her first race at the LSU Tiger Classic in 2007.

“The wind we had on the backstretch made it really difficult to run the oval today, but I thought Nickiesha ran about as good a 400 hurdle race as she could have for the first time,” Shaver said. “She’s much further along at this stage of the game than she was at this time last year. I was very impressed with the way she ran that race when there really wasn’t any competition.”

Like Baptiste, senior Richard Thompson and sophomore Samantha Henry were also impressive in their first 200-meter races of the outdoor season.

Two other Lady Tigers punched their ticket to the regional meet in the 200 meters for the first time this season as senior Juanita Broaddus finished the race in 23.41 and junior Monique Cabral clocked a new overall personal best of 23.54.

In addition to the Lady Tigers’ performance in the 200, Shaver said it was also important for the team’s 800-meter runners to break the qualifying standard this weekend. They did just that as junior Kayann Thompson won the event with a time of 2 minutes, 6.11 seconds, while freshman Brittany Hall crossed the finish line with a new overall personal record of 2:06.79.

“We really wanted our women in the 200 and the 800 to get something done at this meet,” Shaver said. “I thought Kelly and Samantha did an outstanding job of running the 200, and Brittany stepped up with a big personal best in the 800. You can’t ask for much more than that.

“We already know what Richard can do in the 100, but he is someone who is really going to help us out if he can run the 200 with some consistency. He’s sprinting with a lot of confidence right now, and he’s really learning how to run that race with better results.”

The squads got off to a fast start with the meet’s first event as junior Rabun Fox and sophomore Kim Williams each set new personal bests and improved regional marks in the hammer throw.

Fox improved his previous best of 212 feet, 6 inches by more than three feet with a throw 215-11 on his sixth and final throw of the competition to finish in third pace behind Auburn All-Americans Cory Martin (239-9) and Jake Dunkleberger (225-5). His effort also ranks No. 7 in the NCAA of all marks entering this weekend’s action.

Williams set a new personal record of her own with a mark of 184-5 to take third place in the women’s competition, improving from her previous best of 183-0 set in LSU’s outdoor opener at the Willie Williams Classic in Tucson, Ariz., back on March 21.

Junior Chad Radgowski continued LSU’s momentum in the throws as he wrapped up the meet with a 10-foot improvement on his seasonal best in the javelin competition. The native of Liberty, Pa., won the event title with the sixth best throw in the country this season at 237-2.

“I feel like we got a lot of things done at this meet, particularly in the throws,” Shaver said. “That group just keeps getting better with each meet. They’re beginning to show a lot more consistency, especially Rabun. It seems like he’s setting a new personal best in the hammer every week.”

Two LSU pole vaulters also enjoyed new personal best performances during Saturday’s action as junior Mallory Thompson cleared 12-1 ? for a new overall PR in the event, while freshman Kyle Rose broke the 16-foot barrier for the first time in his career with a clearance of 16-0 ?.

The squads return to action next weekend as the play host to the LSU Alumni Gold on April 19 before making their annual trip to Philadelphia to compete in their regular season finale at the 114th Penn Relays at historic Franklin Field. The championship season kicks off May 15-18 at the 2008 SEC Outdoor Track and Field Championships in Auburn, Ala.