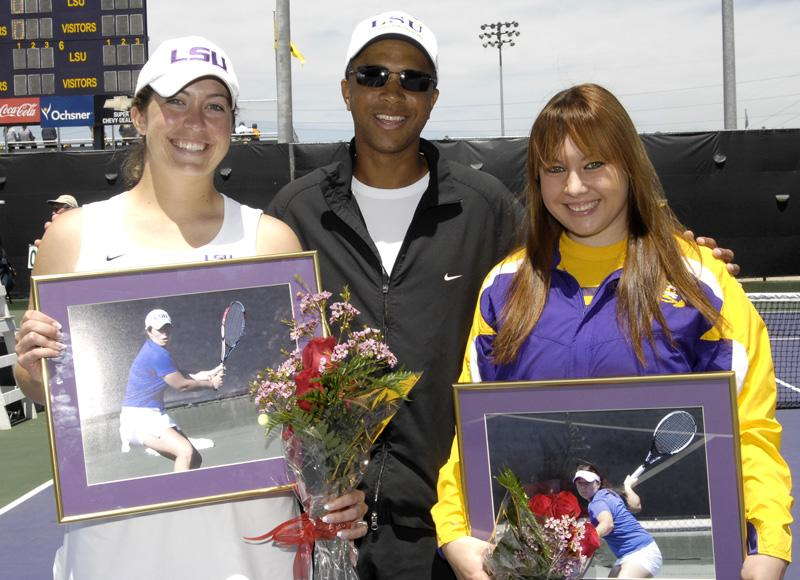 BATON ROUGE — On Senior Day for the LSU women’s tennis team, it was sophomore Nicole Kantor who clinched both the doubles point and the overall match against 15th-ranked Arkansas as LSU (13-8, 6-5 SEC) upset the Lady’Backs, 5-2, at W.T. “Dub” Robinson Tennis Stadium on Saturday.

“That was a really hard-fought match,” LSU head coach Tony Minnis said. “Arkansas has had a great year, and I was really proud of the effort that our players gave on every court. I was proud that in doubles we were able to fight through adverse factors to be able to come back and win. It’s been frustrating that earlier in the year we were banged up, but it’s nice to have the whole team back on the court again.”

The match was tight early as the doubles point took over two hours to decide. The match-up of two ranked doubles teams on court 1 was first to finish. LSU’s 29th-ranked Megan Falcon and Mykala Hedberg breezed past No. 24 Aurelija Miseviciute and Ela Kaluder, 8-3.

However, Arkansas’ Nanar Airapetian and Maryori Franco answered back on court 2 by beating LSU’s Hannah Robinson and Tiffany Tucker, 8-5.

With the doubles point hanging in the balance, LSU’s Kantor and Staten Spencer pulled out an extremely close match, 9-8 (6), in a tiebreaker to put the Lady Tigers up 1-0. The match was intense throughout as both Arkansas’ duo of Audrey Bordeleau and Anouk Tigu and LSU’s duo traded games. When Kantor and Spencer finally clinched, the match had lasted just under two hours at one hour and 58 minutes.

In singles, No. 18 Falcon got revenge on an earlier season loss to No. 1 Miseviciute by defeating the Lady’Back in straight sets, 6-3, 6-1. The win gave LSU a 2-0 lead and was Falcon’s 11th win against ranked opponents and her 25th overall victory.

However, Robinson pushed her winning streak to seven matches with a straight-set win over Tigu, 7-5, 6-3, on court 3 to increase LSU’s lead to 3-1.

LSU’s win on Senior Day serves as the regular season finale because the Lady Tigers’ match against Northwestern State scheduled for Tuesday at 3 p.m. has been cancelled. LSU’s next match will come in the SEC tournament that begins Thursday, in Auburn, Ala.