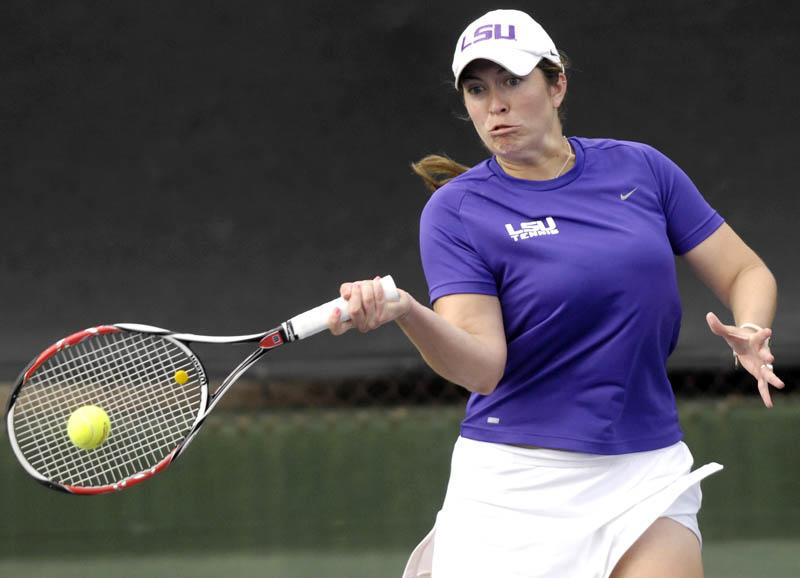 Fans are invited to come out as LSU (12-8, 5-5 SEC) will honor two seniors ? Tiffany Tucker and Anastasiya Dubova, who suffered a season-ending injury earlier in the year.

There will also be Tiger Trivia in which one fan will win two LSU tennis t-shirts.

“This will be a huge match,” LSU head coach Tony Minnis said. “We are really looking forward to battling against Arkansas. I feel like the last two matches have given us some confidence because we have been playing really well. Arkansas has had a phenomenal season this year. They have really stepped up and played some good tennis, so hopefully we can get them on our home courts.”

Arkansas is led by the nation’s No. 1 ranked player, Aurelija Miseviciute, who enters the match with a 45-3 overall record. The Lady’Backs also feature one other ranked singles player, No. 62 Ela Kaluder, who holds a 17-13 record on the season.

Kaluder and Miseviciute form the nation’s No. 24 doubles team, and the duo is 11-7 in dual play.

LSU is led by 18th-ranked Megan Falcon, who is 24-5 overall and 16-3 in dual play. In the fall season, Falcon and Miseviciute squared off in the Intercollegiate Tennis Association National Indoor Championships. In the quarterfinal round, Miseviciute pulled out the win in three sets over Falcon, 6-4, 4-6, 6-1.

Hannah Robinson is tied with Falcon for the team lead in overall and dual wins. Robinson holds a 24-7 overall record and a 16-4 dual record. Robinson currently has a six-match win streak.

In doubles, Falcon and Mykala Hedberg enter as the No. 29 team in the nation. Together, the Lady Tiger tandem is 10-4 on the season and 4-2 against ranked opponents.