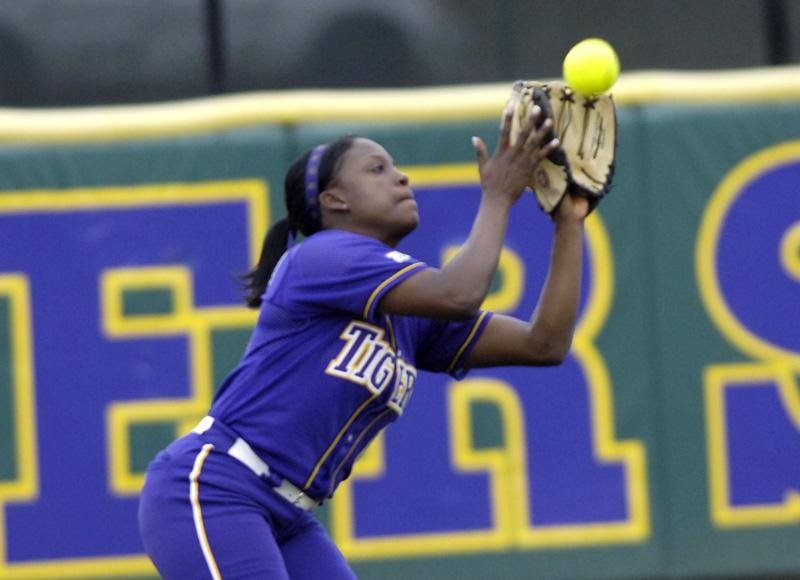 BATON ROUGE — After eight-straight road games, the 12th-ranked LSU softball team returns home to host Ole Miss in a three-game Southeastern Conference series this weekend, beginning with a doubleheader on Saturday at 1 p.m. and concluding with a single game on Sunday at 1 p.m.

The weekend will mark the “Salute to Jazz” with the first 250 fans receiving FREE sunglasses and fans will have the chance to win two tickets to the New Orleans Jazz and Heritage Festival.

The series can be heard on the LSU Radio Network in Baton Rouge on The X – 104.5/104.9 and in the GeauxZone powered by USAgencies. Live statistics from all three games will also be available on the official LSU athletics website, LSUsports.net. In addition, Sunday’s game will be broadcast on Cox Sports Television, in Baton Rouge on cable channel 37.

“We are thrilled to be back at Tiger Park,” said LSU head coach Yvette Girouard. “We have been on the road for a while and it is nice to get to play at home once again. It should be a great weekend. Hopefully there will be great weather and great crowds that come out for this SEC series.”

The Tigers (31-10, 10-6 SEC) are currently tied with Tennessee for third place in the league standings after sweeping a doubleheader from Kentucky on the road on Wednesday. The wins snapped a six-game losing streak that saw LSU get swept by No. 3 Florida and No. 2 Alabama in successive weekends on the road.

The Rebels (17-23, 1-16 SEC) currently sit in last place in the SEC, recording their first conference win last weekend against the Wildcats. Ole Miss has won two of its last four games, which snapped a series that saw the Rebels lose 13 of their previous 14 games.

“This is a very important series for us,” said Girouard. “This is a Western Division opponent, which always makes this a crucial series, especially as we get closer to the end of the season. We lost a game to Ole Miss last season and that is still fresh in the minds of our players.”

In the doubleheader sweep of Kentucky on Wednesday, Erika Sluss recorded two huge home runs, including a grand slam in game one and a go-ahead three-run home run in game two. The grand slam in the first game was part of an 11-run sixth inning that saw the Tigers win, 13-2, in six. The sixth double-figure inning in school history, the 11 runs was only four behind the school record of 15 runs against Nicholls State in 2004.

Duhon leads LSU at the plate in conference play with a .364 average. In the last 13 games, the left fielder has hit at a .429 clip with two doubles, three home runs, six RBIs and nine runs scored for a .743 slugging percentage. Senior Shannon Stein continues to lead the Tigers at the plate for the season. The second baseman is hitting .342 with seven doubles, one home run, 15 RBIs and 22 runs scored. Mitchell is hitting .336 and has posted a team-high 10 doubles and leads the team with 28 runs scored.

Lauren Grill leads Ole Miss in almost every offensive category. The sophomore has recorded a .357 batting average, the only Rebel player hitting over .300 on the season, with 11 doubles, seven home runs, 31 RBIs and 23 runs scored, all of which are team highs. Alise Doubt has the second-best average on the team at .286, while no player other than Grill has more than two home runs or 13 RBIs.

As a team, the Tigers are hitting at a .281 clip for the season. LSU has hit 48 doubles with six triples and 37 home runs. In 41 games, the Tigers are averaging over five runs per game. LSU has recorded 80 stolen bases, while being thrown out only nine times. Conversely, Tiger catchers have thrown out 16 attempting to steal and allowed only 25 stolen bases. In the field, LSU boasts a fielding percentage of .974, having committed less than 30 errors in over 1,000 attempts.

Ole Miss is hitting .243 as a team for the season. The Rebels have hit 39 doubles, but only posted three triples and 16 home runs. In 40 games, Ole Miss is averaging just under three and a half runs per game, while giving up over three runs per game.  The Rebels have not been highly successful on the base paths as Ole Miss has recorded only 13 stolen bases on the season, while being thrown out 11 times. Conversely, the Rebels have caught 17 attempting to steal, but also allowed 47 stolen bases.

As a team, the Tigers have a 2.24 earned run average. LSU has recorded nine shutouts and given up only 90 earned runs in 41 games. The Tigers have struck out 337, the second most in the SEC, in 280 innings for an 8.4 strikeouts per seven innings average. Ole Miss has a 2.36 team earned run average this year. Recording five shutouts, the Rebels have struck out 229 in almost 270 innings, but opponents are hitting .232 against them.

LSU is 34-3 all-time against Ole Miss, but lost the first game of the three-game series to the Rebels in Oxford last season. The loss snapped a 25-game winning streak over Ole Miss, dating back to 1999. The Tigers have still never lost a series to the Rebels, winning all previous 11 series. At Tiger Park, LSU is 16-1, with the lone loss coming on April 2, 1999.

LSU remains at home to host Nicholls State on Wednesday at 6 p.m. The Tigers are 3-0 against the Colonels this season, winning two games at home in the Easton Tiger Classic before returning to the road to face No. 10 Tennessee in a three-game series. LSU will close out the regular season home schedule the following week with a three-game series against Arkansas.

INTERNET
Live stats in the Geaux Zone at LSUsports.net