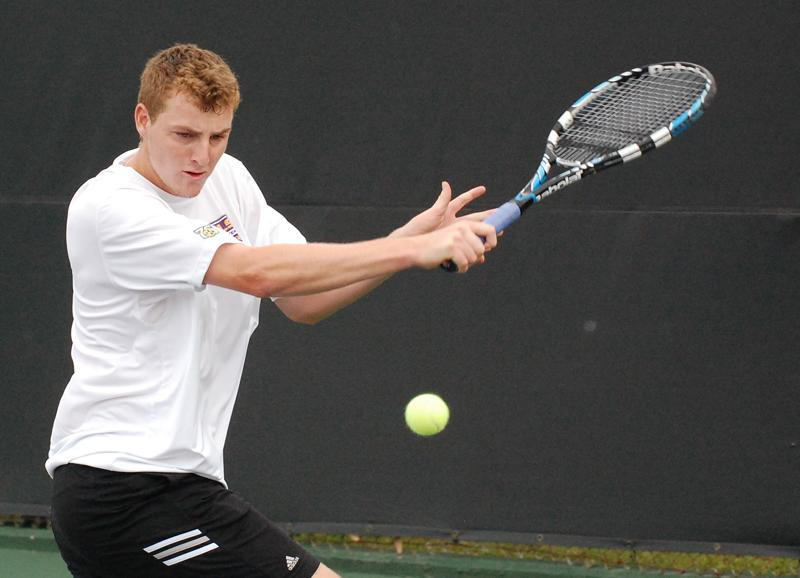 FAYETTEVILLE, Ark. — The 17th-ranked LSU men’s tennis team will play its final regular season match Saturday when it battles Arkansas at the Dills Indoor Tennis Stadium for a noon match.

The Tigers (12-7, 5-5 SEC) are looking to solidify their seed for the conference tournament next week, which also takes place in Fayetteville, and climb back in the top 16 in hopes of hosting the opening rounds of the NCAA Tournament. The Tigers are currently the sixth seed in the SEC with a 5-5 record.

The Razorbacks (12-11, 3-7 SEC) are coming off a 5-2 home victory against UMKC on Wednesday. Head coach Robert Cox is in his 21st season of leading the Razorbacks.

Last season the Tigers defeated the Razorbacks by a 5-2 score in Baton Rouge. LSU leads the all-time series against Arkansas with a 19-4 record.

“Arkansas has a good team this year and they have picked up some big wins,” LSU head coach Jeff Brown said. “Last year they didn’t make the tournament and this year they will and have been playing very well at home. It looks like it will be an indoor match so we need to be ready to go from the start in order to get the win.”

LSU hopes to regain their doubles momentum after they stumbled at the end of doubles in their last match against Ole Miss. The Ole Miss match snapped a five-match streak in which the Tigers had won the doubles point.

Freshman Sebastian Carlsson, who was named SEC Freshman of the Week for the fourth time this week, continues to lead the Tigers in wins with 24.

Junior Michael Venus has proven to be a valid No. 1 player for the Tigers as he has picked up six wins against ranked opponents this season, including three in the top 30. The Orlando, Fla. native is currently ranked No. 47.

Venus and doubles partner James Cluskey, the No. 30-ranked duo, has compiled a 13-4 record this season.

Arkansas has one player listed in the national rankings with Blake Strode who owns a 16-17 record.

After the Arkansas match, LSU will return to Fayettville for its next competition at the SEC Championships which takes place April 17-20.