Former Tiger Bateman in the Hunt Early at The Masters 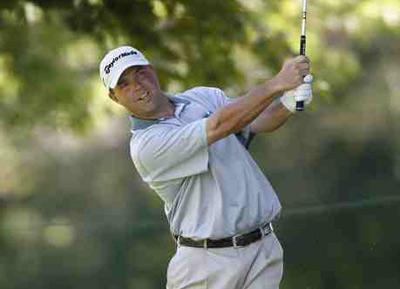 AUGUSTA, Ga. — Former LSU All-American and current PGA Tour standout Brian Bateman fired a 3-under-par 69 in Thursday’s opening round of the 2008 Masters Tournament at Augusta National Golf Club to finish the day just one shot out of the lead in a tie for third place.

Bateman is competing in The Masters for the first time in his professional career and is making just his third appearance in a major championship since joining the professional ranks in 1996.

Bateman got off to a quick start as he was 2-under through three holes after making back-to-back birdies on holes No. 2 and No. 3. After falling back to even-par with consecutive bogeys on No. 6 and No. 7, Bateman made the turn at 1-under following a birdie on the par-4 ninth hole.

Bateman is currently one shot back of Justin Rose and Trevor Immelman, who are the leaders in the clubhouse after firing opening rounds of 4-under 69. He is in a tie for third place with Brandt Snedeker and Lee Westwood at 3-under par.

Bateman is paired with Todd Hamilton in Friday’s second round and will be the first player to tee off at 7 a.m. CDT.

Bateman earned an exemption to compete in this year’s Masters Tournament after picking up his first career win at the 2007 Buick Open in Grand Blanc, Mich., on July 1 of last year.

He is not the only former Tiger great competing at historic Augusta National GC this weekend as David Toms carded a 1-over 73 to finish the first round in the tie for 33rd place. Toms is in position to make the cut at The Masters for the second straight year after earning his third career Top 10 a year ago with a ninth-place finish.

Toms will tee off in the second round at 8:17 a.m. as he is paired with Tim Clark and Niclas Fasth. ESPN will begin its three-hour coverage of Friday’s action at 3 p.m.

The Top 44 golfers plus those within 10 strokes of the leader make the cut and will play rounds on Saturday and Sunday.

Zach Johnson is the defending Masters champion. He stands in a tie for sixth at 2-under 70.