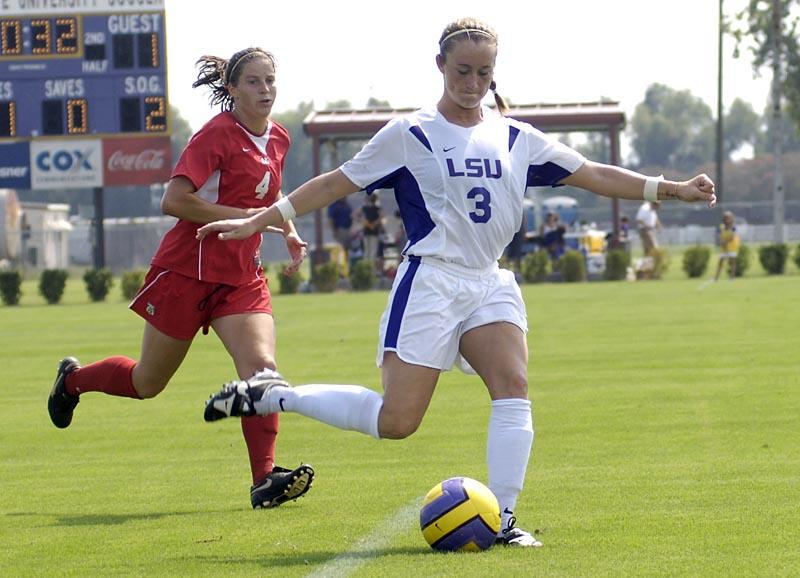 BATON ROUGE — After Malorie Rutledge put the Tigers on the scoreboard just 49 seconds into the match, the LSU soccer team rolled to a 6-0 win over Northwestern State on Wednesday night in their only spring exhibition match at the LSU Soccer Complex.

The Tigers improve to 2-1-2 in spring action and are now riding a two-game winning streak after blanking in-state opponent Southeastern Louisiana by a 1-0 margin on April 2.

“This was a great night for soccer and a great opportunity for our kids to get on the field and see some live action against a quality team,” said LSU head coach Brian Lee. “The spring season is all about player development and getting better as a team, and I think we continued to show that tonight. We feel good about where we are at this stage of the game.”

Rutledge got the ball rolling in the first minute of the contest after collecting a centering pass off the foot of junior captain Roslyn Jones and firing a shot into a wide open net from inside the area. Sophomore Rachel Yepez was also credited with an assist on the goal.

Sophomore Michelle Makasini extended the LSU advantage to 3-0 before the halftime break with a pair of goals in the 38th and 41st minutes of the first half.

Yepez broke the game open with a hat trick in the second half to give the Tigers their final 6-0 margin of victory. She scored her first goal six minutes in to the half by launching a shot inside the right post from 30 yards out in the left side of the field.

Yepez followed with her second goal in the 83rd minute when she put home a rebound from inside the six-yard box. She then scored on a breakaway in the 88th minute for the final margin.

The Tigers dominated the run of play and finished the match with 19 shots, eight shots on goal and 12 corner kicks. The LSU defense was just as dominating as it limited the Demons to just two shots with one shot on goal and zero corner kicks in 90 minutes of action.

“We’ve had a very productive spring to this point, and we’re looking to finish it off strong this weekend,” Lee said. “It’s important that we finish it strong to give our team some momentum heading into the summer. I’m very happy with the commitment they’ve shown through these two months of spring practice, and I’m confident they will continue that in our offseason program.”

The Tigers are set to wrap up the spring exhibition season on Sunday afternoon as they travel to Houston, Texas, to take on the nationally-ranked Texas Longhorns in match scheduled for 3 p.m. at Meyer Park. The sides battled to a 2-2 draw in Austin, Texas, during the 2007 regular season when the Longhorns were the fourth-ranked team in the nation.