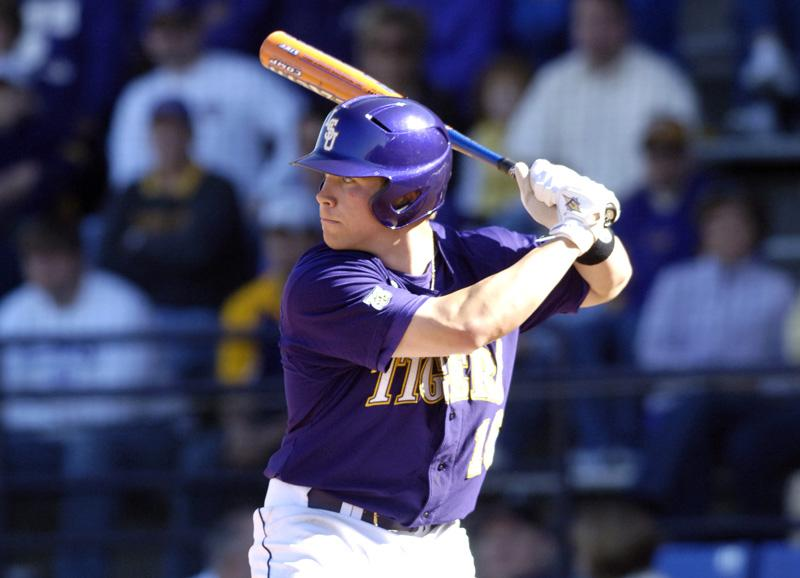 LSU won for the sixth time in its last seven games. The Tigers open a three-game series at Ole Miss Friday.

“This was an important win for our team,” said LSU coach Paul Mainieri. “To get a victory on the road against a very good Southern Miss team in front of a big crowd should give us some momentum heading into our series at Ole Miss. I thought we swung the bats well tonight, and we had several pitchers get some work as we prepare for this weekend.”

The Tigers struck for six runs in the top of the fourth against Southern Miss starter Josh Billeaud (2-2).  Catcher Micah Gibbs was hit by a pitch to start the frame before he was forced at second on a ground ball by shortstop DJ LeMahieu. Centerfielder Leon Landry singled and leftfielder Johnny Dishon walked to load the bases.

Schimpf then launched a Billeaud pitch over the left field wall for a grand slam and 4-0 LSU lead. The homer was the fifth this season for Schimpf.

The Tigers extended the lead to 7-0 in the seventh when Helenihi doubled and scored on LeMahieu’s single.

USM responded with four runs in the bottom of seventh.  Designated hitter Trey Cuevas launched a solo blast and third baseman Chris Matesich belted a two-run homer off of LSU reliever Paul Bertuccini, and second baseman James Ewing delivered an RBI double against Daniel Bradshaw to narrow the gap to 7-4.

Dean gave LSU a four-run cushion with a solo homer in the top of the eighth, his seventh dinger of the season.

Freshman right-hander Austin Ross (2-1) ? the second of six LSU pitchers ? was credited with the victory ? as he worked two shutout innings and allowed one hit. LSU starter Ryan Verdugo worked the first three innings for the Tigers, limiting the Eagles to no runs on two hits with one walk and three strikeouts.

Billeaud was charged with the loss as he surrendered six runs ? four earned ? on seven hits in 3.1 innings with two walks and three strikeouts.