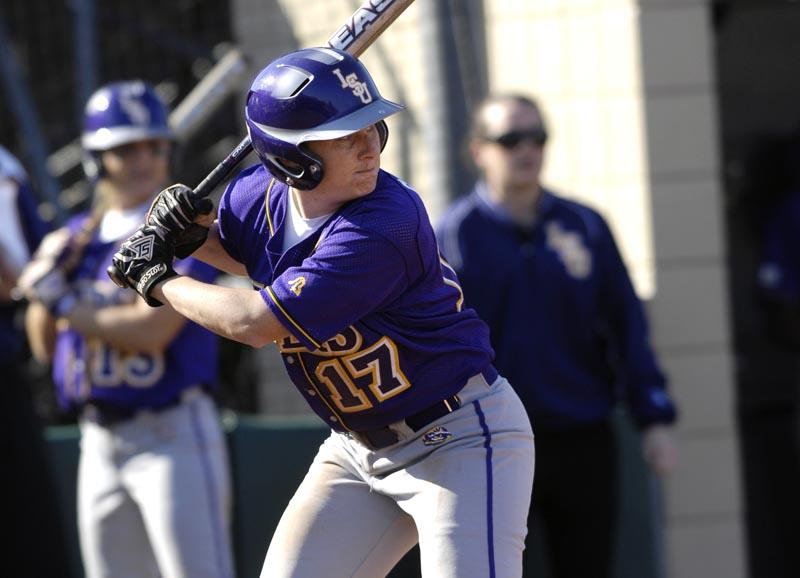 BATON ROUGE — A pair of home runs and seven RBIs by Erika Sluss led the 12th-ranked LSU softball team to a doubleheader sweep of Kentucky, 13-2 in six innings and 5-2, on Wednesday afternoon at the UK Softball Complex.

With the wins, the Tigers improve to 31-10 on the season and 10-6 in Southeastern Conference play, in a tie for third place in the league standings. The loss dropped the Wildcats to 15-24 overall and 3-13 in conference play. LSU now returns home for a three-game series with Ole Miss, ending an eight-game SEC road trip.

“It is great to get back in the win column,” said LSU head coach Yvette Girouard of ending the six-game losing skid. “We accomplished what we came here to do. It’s going to b e nice to get back to Tiger Park since we’ve been on the road for a little bit.”

An 11-run sixth inning by the Tigers put the first game out of reach, breaking up the 2-2 tie. The big blow came in the form of a grand slam by Erika Sluss, her second career grand slam. The 11-run inning was the second double-figure scoring inning of the year for LSU. In the season opener, the Tigers scored 10 runs in the first inning. It also marked the sixth double-figure inning in school history, four behind the school record of 15 runs against Nicholls State in 2004.

“We had some great at-bats today by a few different Tigers,” said Girouard.”And the balls were flying out of the park.”

Dani Hofer earned the complete-game win to improve to 17-5 in game one. She allowed two runs on only two hits with three walks and nine strikeouts. After giving up a two-run home run in the third, Hofer retired the final 10 batters of the game, including six by strikeout.

In the second game, Cody Trahan earned the complete-game win to improve to 11-3 on the year. She allowed two runs on seven hits with a walk and four strikeouts.

After getting three hits in the first two innings, LSU got on the board in the top of the third. With two outs, Mitchell hit her fifth home run of the season to left field.

In the bottom half of the inning, Kentucky took the lead. With two outs, Natalie Smith broke up the no-hit bid with a single to right field. Molly Johnson then hit a home run to left center field to put the Wildcats ahead, 2-1.

The Tigers tied it up in the top of the fifth. With one out, Dee Dee Henderson hit her third triple of the season as the outfield was playing in tight and Henderson’s hit got past the left fielder and rolled all the way to the wall. Jazz Jackson then came through with a shallow sacrifice fly to right field that allowed Henderson to score from third to even the game at two each.

LSU broke the game open with 11 runs in the top of the sixth inning. The Tigers batted around before recording the first out of the inning, which featured five singles, a double, a grand slam by Sluss, and four walks. Fourteen LSU players came to the plate in the inning with every batter reaching base at least once with the exception of Jessica Mouse, who was pinch hit for by Casey Faile in the first go round.

Quinlan Duhon led off with a double off the top of the wall in center field. Two-straight walks to Tayl’r Hollis and Sluss loaded the bases. LSU then came through with back-to-back RBI singles by Faile and Shannon Stein. A bases loaded walk to Ashley Applegate scored the third run of the inning. The Tigers then followed that up with three-straight singles by Jackson, Mitchell and Killian Roessner.

Amber Matousek started and took the complete-game loss for Kentucky to fall to 9-13 on the season. She allowed 13 runs on 12 hits with seven walks and two strikeouts in six innings.

Duhon put the Tigers on the board early in the nightcap. In the top of the second inning, she hit her fifth home run of the season, and it was never in doubt. The shot left the field on its way up, clearing the left field fence and coming near the fence to the park, which is about 30 feet further.

In similar fashion to game one, Kentucky came back to take the lead on a two-run home run in the bottom of the third. A one-out walk to Destinee Mordecai broke up the perfect game bid. Meagan Aull then put the Wildcats ahead, 2-1, on a home run to right center.

Sluss came through with another big blow in the top of the fourth to put LSU ahead once again. With one out, Roessner and Duhon posted back-to-back singles. With two outs, Sluss hit her sixth home run of the season on a shot to straight away center field to put the Tigers on top, 4-2.

In the bottom of the fifth, Kentucky put the go-ahead run at the plate. Ashley Dimkich led off with a single. With two outs, Aull singled to put runners on first and second. On a single up the middle by Audrey Meyer, Dimkich attempted to score from second and was thrown out at the plate by Jackson to end the inning.

LSU got an insurance run in the top of the seventh. With two outs, Jackson singled and then stole second. A single up the middle by Mitchell scored Jackson from second for the 5-2 advantage.

The Wildcats got the tying run to the plate in the bottom half of the inning. With one out, Katie McCarty and Mordecai recorded back-to-back singles to bring up the tying run. Trahan then got Aull to strike out swinging before Roessner picked off Mordecai to end the game.

Jennifer Young took the complete-game loss for Kentucky to fall to 3-9 on the year. She allowed five runs on eight hits with two walks and a strikeout.

This weekend, the Tigers return home to host Ole Miss in a three-game SEC series. LSU will face the Rebels on Saturday in a doubleheader beginning at 1 p.m. The series will conclude with a single game on Sunday at 1 p.m. The weekend will mark the “Salute to Jazz” with the first 250 fans receiving FREE sunglasses and fans will have the chance to win two tickets to the New Orleans Jazz and Heritage Festival.