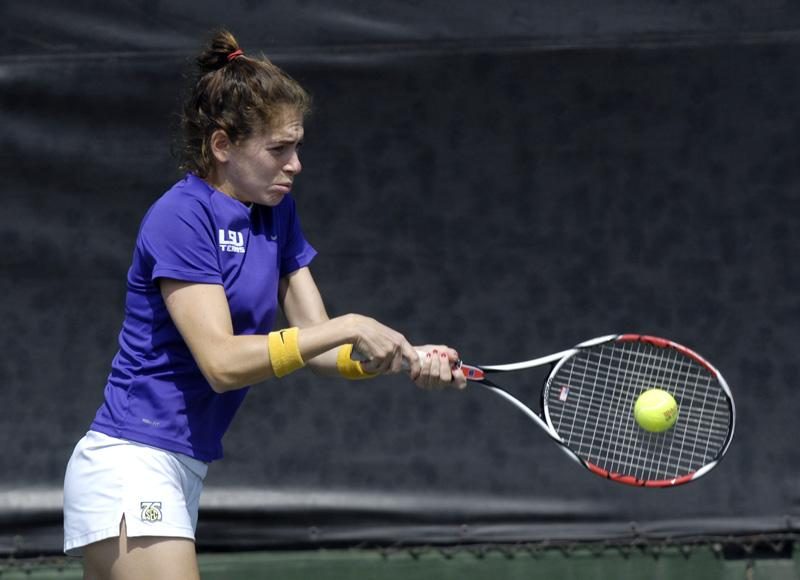 BATON ROUGE — The LSU women’s tennis team completed its match against Mississippi State five days after it began by knocking off the Bulldogs, 5-1, at W.T. “Dub” Robinson Tennis Stadium on Wednesday, while the match against Prairie View A&M scheduled for Thursday has been cancelled.

“It’s always tough whenever you have momentum and you have a delay for several days,” LSU head coach Tony Minnis said. “Things change very quickly, so I was a little concerned with them coming back and being in some very tight matches against Mississippi State.”

LSU (12-8, 5-5 SEC) won three matches last Friday against the Bulldogs before heavy rains forced the match to be postponed.

Spencer won a tough first set, 7-5, last Friday and finished off MSU’s Tatiana Feit, 6-3 to clinch the match for LSU.

“Staten was down three set points and came back to win the first set,” Minnis said. “I was pleased with how she came out today.”

Nicole Kantor lost the first set, 6-2, on Friday but had battled back to take a 4-2 lead before play was suspended. MSU’s Elna de Villiers won two games when play resumed to tie it at 4-4, but Kantor pulled out the next two games to even the match at a set apiece. In the third set Kantor broke de Villiers early to take a 2-0 lead, but de Villiers broke right back and evened the set at 2-2. After they traded games, Kantor broke de Villiers and then held serve to go up 5-3. The Lady Tiger closed out the match and completed the come-from-behind victory, 6-4.

“Nicole was down a set and I knew it was going to be tough, but I was pleased with the way she came back and took care of business,” Minnis said.

After LSU had clinched the match, both coaches agreed not to play for the doubles point.

With the win, LSU moves into sole possession of second place in the SEC West at 5-5, behind Arkansas who sits at 7-3. Auburn is now in third at 4-6.

LSU’s match against Prairie View was originally scheduled for April 2 but was postponed because of rain. The match was rescheduled for Thursday at 3 p.m., but both teams agreed to cancel it.