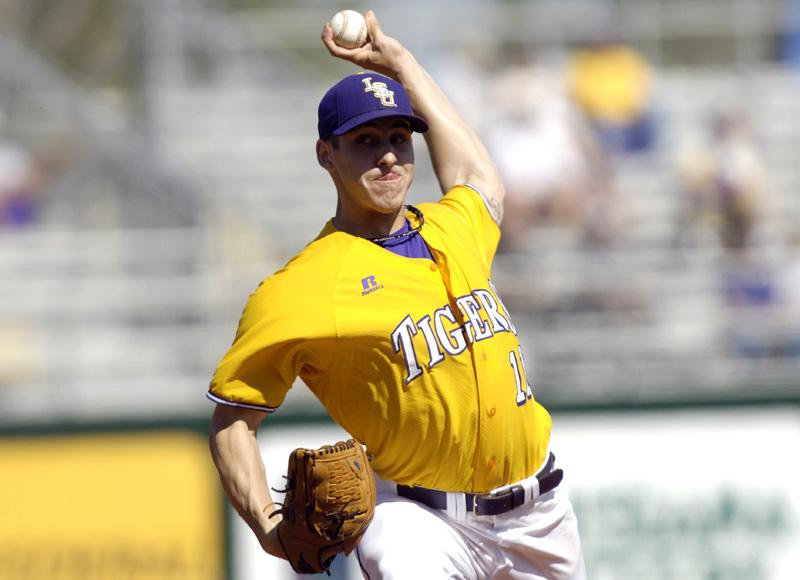 The game can be heard on the affiliates of the LSU Sports Radio Network, including flagship station WDGL 98.1 FM in Baton Rouge. Live audio is also available in the Geaux Zone at www.LSUsports.net.

Following its game at Southern Miss, LSU will journey to Oxford, Miss. for a three-game SEC series that begins Friday at Ole Miss.

LSU won four of its five games last week, including a 2-1 series victory over Alabama in Alex Box Stadium. The Tigers posted their third straight series win over Alabama and moved into a third-place tie with the Crimson Tide in the SEC Western Division.

LSU recorded consecutive shutouts over Centenary on April 2 and over Alabama on April 4, marking the first time the Tigers posted back-to-back shutouts since April 23-24, 2005 when LSU blanked Arkansas in consecutive games.

“I felt we took some positive steps last week,” said LSU coach Paul Mainieri. “I was very pleased with our competitiveness and intensity. We faced some adversity in the Alabama series, but we showed a lot of determination in overcoming a three-run deficit in the sixth inning on Sunday that allowed us to win the series.

“Our schedule certainly doesn’t get any easier. Playing at Southern Miss and Ole Miss will provide tremendous challenges to our club, but we’re excited for the opportunity to play at a high level against two great teams.”

Mainieri said that junior left-hander Ryan Verdugo (5-2) will start on the mound Wednesday at Southern Miss. Verdugo turned in a strong outing in his last start on April 2 versus Centenary. He limited the Gents to two hits in 5.1 scoreless innings with no walks and three strikeouts.

Junior third baseman Derek Helenihi led LSU to its series victory over Alabama, batting .462 (6-for-13) in three games with one double, one homer, three RBI and two runs. Helenihi’s homer ? the first of his LSU career ? was a solo shot in the bottom of the eighth inning Sunday to give the Tigers an insurance run in a 9-7 victory.

For the entire week, Helenihi batted .474 (9-for-19) in five games with one double, one triple, one homer, three RBI and three runs.

A pair of true freshmen ? rightfielder Johnny Dishon and catcher Micah Gibbs ? also enjoyed very productive series against Alabama. Dishon hit .400 (4-for-10) versus the Tide with two doubles, one triple, one homer, three RBI and four runs scored. Dishon’s homer ? the first of his collegiate career ? was a solo shot in Game 1 of the series that gave LSU a 2-0 advantage in the fifth inning of a 3-0 LSU win.

Gibbs hit .400 (4-for-10) in the Alabama series with two doubles, three RBI and two runs scored ? he also threw out one Tide base runner attempting to steal.

Junior designated hitter Chris McGhee was in the starting lineup for the first time this season on Sunday, and he responded by going 2-for-3 with one double, one steal and three runs scored in the Tigers’ victory.

Bradford earned his sixth win this season with a relief victory over Alabama on Saturday, working 5.1 shutout innings and limiting the Tide to just three hits with no walks and one strikeout.

Paul Bertuccini was brilliant in relief in Sunday’s win over Alabama, earning a victory with 2.2 shutout innings. Bertuccini allowed just one hit while recording one walk and three strikeouts, securing the series victory for the Tigers.

Ross earned his first career win last Tuesday at Southern, firing seven shutout innings in relief. Ross, who was named the Louisiana Sportswriters Association Pitcher of the Week, limited the Jaguars to four hits and registered one walks and eight strikeouts.

LSU enters the USM contest with a .299 team batting average, and the Tigers have launched 37 homers. LSU collected 14 hits ? its season-high total in an SEC game ? in Sunday’s win over Alabama.

Southern Miss is led at the plate by infielder James Ewing, who is hitting .354 with two homers and 10 RBI. Infielder Brian Dozier is hitting .317 with seven doubles and a team-best 20 RBI, while outfielder Drew Carson paces the Golden Eagles in home runs with six.

LSU leads the overall series with Southern Miss, 31-11-2, as the squads first met in 1970. The Tigers posted a 2-1 series victory over the Eagles last season in Alex Box Stadium. The teams also met in the 2004 NCAA Baton Rouge Regional in Alex Box Stadium, where LSU defeated the Eagles, 6-2.

Wednesday’s game marks LSU’s first trip to Hattiesburg since 1990, when the Tigers recorded a 10-2 victory.

RANKINGS
Neither team is ranked in a Top 25 poll