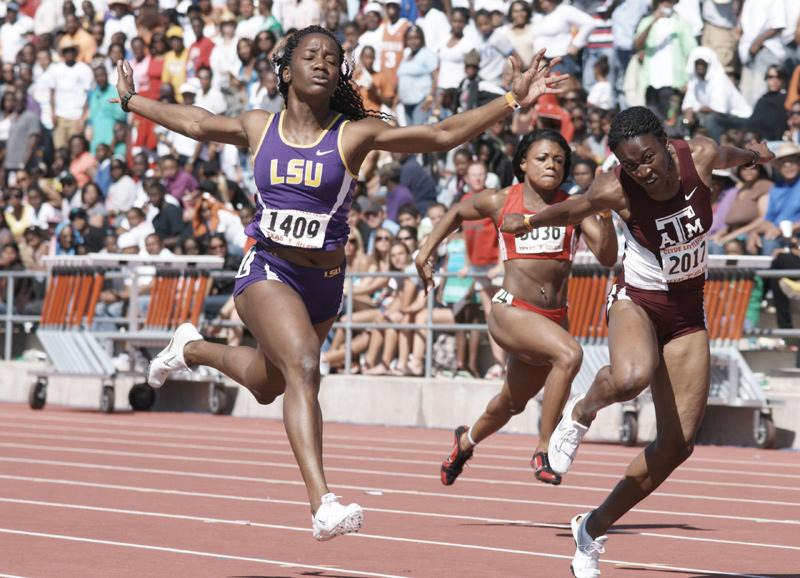 BATON ROUGE — LSU’s track and field athletes continue to be honored by the Southeastern Conference for their performance this year as seniors Richard Thompson and Kelly Baptiste were named the SEC Male and Female Track Athletes of the Week on Tuesday.

Both Thompson and Baptiste ran their first 100-meter races of the season at the 81st Texas Relays this past weekend and walked away from the track at Mike A. Myers Stadium with world-leading and record-setting times in the event.

His effort is also a new stadium record for Mike A. Myers Stadium, eclipsing the previous record of 10.06 set by Arkansas great and American superstar Tyson Gay in 2004.

In addition to his individual performance in the dash, Thompson also ran the second leg on the Tigers’ 400-meter relay team that won its fifth straight title at the prestigious Texas Relays with an NCAA leading time and the second-fastest time in the world at 38.74. That time also ranks No. 8 on LSU’s all-time outdoor performance list in the event.

Baptiste’s time is also a new women’s national record for her native Trinidad and Tobago as she improves the mark of 11.08 she set during the 2006 season.

This is the second time in her LSU career that Baptiste has won the women’s invitational 100-meter dash at the Texas Relays as she also accomplished the feat with a wind-aided time of 11.04 at the meet in 2006. Her effort moves her into the No. 5 spot on the all-time outdoor performance list in the storied history of the Lady Tiger track and field program.

In addition, Baptiste also anchored the Lady Tigers’ 400-meter relay team to a runner-up finish with the No. 1 time in the SEC and the No. 2 time in the NCAA this season at 43.10.

The Tigers and Lady Tigers return to action this weekend as they host the Tiger Invitational at the Bernie Moore Track Stadium on Saturday before wrapping up the regular season with the LSU Alumni Gold on April 19 followed by a trip to Philadelphia, Pa., for the 114th running of the Penn Relays at historic Franklin Field from April 24-26.