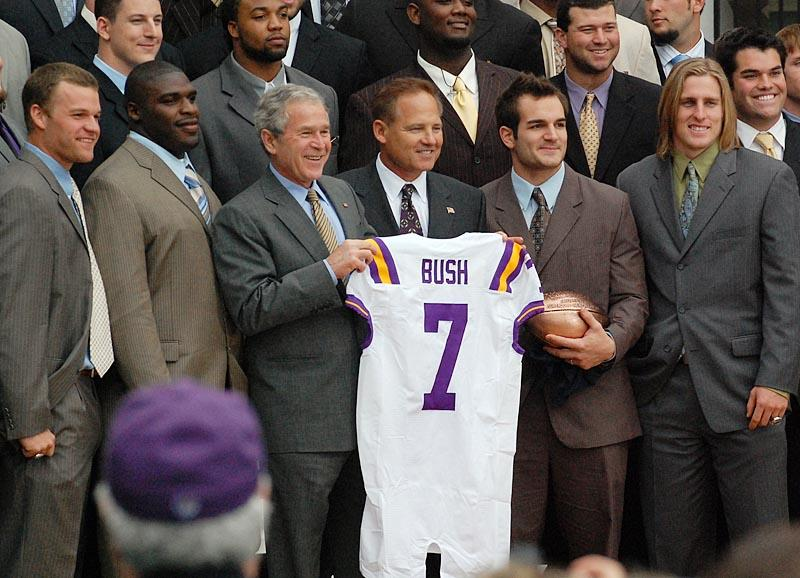 WASHINGTON, D.C. — President George W. Bush welcomed the national champion LSU football team to the White House Monday afternoon in what was an all-day event for the Tigers.

The trip marked the second time in five years that the Tigers have made the distinguished visit to the nation’s capital as they took their first trip after winning the 2003 BCS title.

The Tigers arrived at the White House at 12:45 p.m. and were given a tour of the building.

The highlight of Monday’s festivities was a photo opportunity on the South Lawn of the White House. With the LSU football team standing behind him, President Bush spoke for approximately 10 minutes as he congratulated the Tigers on their 2007 campaign.

Head coach Les Miles presented President Bush with a No. 7 jersey, in reference to the 2007 season, and senior captain Jacob Hester gave the 43rd president of the United States a bronze football.

On Tuesday, a group of Tigers will visit the Walter Reed Army Medical Center. Additionally, the national champs will tour the Pentagon, meet with the Louisiana Delegation at the United State Capitol and then witness the changing of the guard at the Tomb of the Unknown Solider at the Arlington National Cemetery before returning to Baton Rouge.

THE PRESIDENT: Good to see you all. Welcome. Go Tigers! (Applause.) Sit down. Please sit down. Thanks for coming.

So I met some of these men in 2004 — they feel pretty comfortable they were going to be back here. Some of them weren’t so sure I was going to be back here. (Laughter.) It’s good to welcome you back. Proud you’re here. Nothing like being called, “National Champs.” (Applause.) LSU has the honor of being the first school to win two BCS titles. This year there is no split. (Applause.)

I appreciate Les Miles, and Kathy — thanks for coming. Proud to have met you, Coach. It was a great honor for me to have called you after you won that day. And I know you told the team that at least one guy called to congratulate you. (Laughter.) I welcome the LSU administrators, personnel, coaches, trainers, locker room folks, and most of all, the players.

Winning requires very strong leadership — that’s what it takes. After eight years of welcoming national champs there’s always one common denominator, and that is it requires a strong leader to motivate people toward a common goal. And that’s exactly what you have in Coach Les Miles. Coach Miles’s three years has helped the team compile a 34-and-6 record. And this is a guy who’s not afraid to take risks. He tried two fake field goals, fake punt, went for 4th down — went for 1st down on 4th down — 15 times. Made it nearly every time. (Applause.) Of course, he had the players who helped him take that risk.

He also had to deal with some delicate situations away from the field, like inaccurate press stories. (Laughter.) Coach, let me just say, I know the feeling. (Laughter.)

This is Coach Miles’s first time celebrating here at the White House, and a lot of folks are going to remember it because it’s the first time he’s been seen in public without a hat on. (Laughter.)

LSU fans had an amazing season. They — first of all, in the season, the number one ranking changed hands six times. Of course, LSU was number one on the day it counted; that’s why they’re here. You had to overcome adversity to get here. You played as a team, and you won some dramatic football games. And when you lost, it was pretty dramatic, too. You beat Florida in a comeback with the largest crowd ever to watch a game at Tiger Stadium. Two weeks later, you rallied to beat Auburn on a touchdown scored with one second left on the clock.

After you lost to Arkansas, a lot of folks counted you out. But you held a team meeting and decided you had something to play for. In other words, you didn’t let adversity affect you. You said, we’re going to do something about it. And then you beat Tennessee to win the SEC Championship, and you went from number seven to number two — and you went straight to the national title game, which didn’t start off so good. And yet you had 31 unanswered points, like a true champion team, to win 38 to 24. And you’re here at the White House, representing LSU University as the National Champs. And we congratulate you. (Applause.)

Being raised in Texas and growing up in Texas, I’ve got a lot of friends in Louisiana. And you inspired people across the state. I thought Matt — quarterback Matt Flynn put it best. He said, “You can’t dream it any better than that.” And that’s what a lot of people were saying around your state.

You earned your place in the record books. You scored the most points in school history. And the seniors will go down as LSU’s winningest class. No other senior class has had a better record than those at — (applause.)

I welcome defensive tackle, Glenn Dorsey. And so did the team when he turned down — when he decided not to turn pro last year. A lot of fans said, “Thank you, Glenn.” (Laughter.) A lot of opponents said, “No, thank you, Glenn.” (Laughter.) After all, he was the defensive player of the year for SEC, Outland Trophy winner, Lombardi Trophy, and Nagurski Award. He’ll have his time in the NFL, and a lot of teams are sure anxious to have him play for them. Congratulations, and welcome. Glad you’re here. (Applause.)

This is a team of great athletes. Two players were drafted by Major League Baseball. One of the stars, Trindon Holliday, holds the school record in the 100 meters. One of your linemen, Herman Johnson — he holds a different kind of record. (Laughter.) He was the largest baby ever born in the state of Louisiana, at 15 pounds, 14 ounces. (Laughter.) That’s why he’s known as “The House,” which puts him in good stead with his fellow teammates known as, “Putt,” or “Surfer Boy,” “L-Crazy,” and “Cheese.” (Laughter.) Whatever nickname you prefer to be called, all of us here are calling you “Champs.” And you deserve it. I want to thank you for being champions on the field. (Applause.)

I appreciate you understanding that once you’re a champ on the field, means you have a responsibility to be a champ off the field, as well. And there’s no better inspiration than Les Miles and his wife, Kathy. They host events that raise money for the Children’s Miracle Network. They’re active in cancer fundraising and the Special Olympics, the Baton Rouge Children’s Advocacy Center. I told the coach that I was going to mention this, and that is, I’m aware, as the Commander-in-Chief of the finest military ever assembled on the face of the Earth, that he went to boost our troops in Iraq and Kuwait as part of a USO tour. I want to thank you, Coach, for doing your job. (Applause.)

I appreciate the example that Glenn Dorsey has set on the field and off the field to — he works to educate children about the dangers of drugs, and encourages them to work hard. His advice is: “Dream big and make things happen.” There’s nothing better than a champ to help somebody dream big and to encourage them to make something happen.

And so when you leave here, I hope you leave here knowing that you’ve got a special responsibility, not only to represent your school on the football field, but to help make America a better place, just like Ciron Black did, when he heard the story of an 8-year-old LSU fan who was suffering from leukemia. And he took time to send an encouraging message, then he wrote the boy’s name, Mikey, on his wristband during the national championship game. Sometimes people say, I can’t help because I can’t solve all the problems. But in this case, he showed that you can help one person. And in helping one person, he helped the nation as a whole. And I want to thank you, Ciron, for your leadership. (Applause.)

There’s a lot of great stories about the character of the people behind me, but it’s getting chilly, and I’m looking forward to getting my LSU jersey. (Laughter.) And so I want to welcome you all to the White House, to the South Lawn of the White House. I’m so honored and proud to welcome the LSU Tigers here as the National Champs. God bless you. God bless LSU, and God bless America. (Applause.)