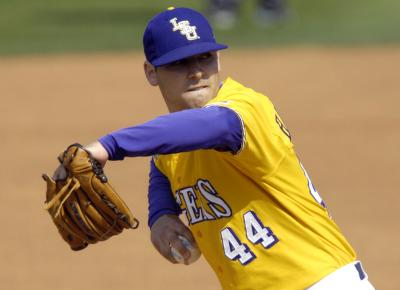 BATON ROUGE — LSU defeated Alabama, 9-7, in the rubber match of the SEC series on Sunday in Alex Box Stadium.

The lead changed three times, and the game was tied in three separate innings. The Tigers (20-11, 5-7 SEC) collected 14 hits on the day and left only eight on base.

Derek Helenihi collected three hits in the game, and Blake Dean, Micah Gibbs, Chris McGhee and Johnny Dishon each had two. Helenihi had a team-high three RBI as well as hitting his first home run of the season.

“You don’t get used to these SEC series,” said LSU coach Paul Mainieri. “I feel like I went 15 rounds with (Muhammad) Ali this weekend. We had to battle so hard over the weekend. Alabama has a heck of a team, and I think we do too. It was a great team victory.”

Blake Martin, who got the start on Friday before the game was called due to thunderstorms, started on the mound for the Tigers Sunday. He retired Alabama (17-15, 5-7 SEC) in order in the top of the first.

Blake Dean got things going for the Tigers in the bottom of the first with a base hit. Matt Clark then reached on an error when Robert Phares, Alabama’s starting pitcher, missed the throw at first for a double play. However, Ryan Schimpf struck out looking to end the inning.

Alabama got on the board first when Brandon May, who was 0-18 in his last five SEC games, hit a home run off the Intimidator billboard in right field. It was the first home run for Alabama in the last 57 innings of play. Martin persevered, retiring the next three batters in order.

Designated hitter McGhee, getting his first start of the season, doubled to right field. Dishon, who homered and tripled in the series, hit a double down the right field line that brought McGhee home. Dishon scored on a single up the middle by Helenihi, who moved to third on a single by Dean. Clark was walked to load the bases for Schimpf, who struck out to end the inning.

Martin forced Ryan Rhoden to fly out to left before he hit Jake Smith and gave up a single to Josh Rutledge in the third. Smith came home on an Alex Kubal single. May hit a sharp grounder up the middle that scored Rutledge, tying the game at three runs a piece before the inning ended.

Martin came out in the fourth, having pitched 3.1 innings and recording five strikeouts. Nolan Cain came on in relief, recording the final two outs of the fourth.

McGhee collected his second hit of the game in the fourth with a single to right field. He stole second and advanced to third when Avila overthrew second base attempting to throw McGhee out. Dishon grounded out to the pitcher before Helenihi hit a dribbler that found its way through the left side of the infield, allowing McGhee to give the Tigers a 4-3 lead.

Cain plunked his second batter of the game in the fifth before being pulled in favor of Shane Ardoin. Avila lined a double down the right field line that scored Kubal to tie the game. May collected his third hit of the game, advancing Avila to third. Avila was left stranded when Kent Matthes grounded into an inning ending double play.

The Tigers were retired in order in the bottom of the fifth. Ardoin recorded the first out of the sixth before being replaced with Jordan Nicholson. He gave up a double to Wilson before giving up a line drive single to Rhoden that scored the go-ahead run. The Crimson Tide weren’t done with their offensive onslaught. Smith hit a two-run homer to left field to put Alabama up, 7-4.

Gibbs lined a shot to right field that put him on base in the sixth. McGhee walked, reaching base for the third time on the day. Dishon doubled for the second time on the day, scoring Gibbs and moving McGhee to third with no outs. Phares was relieved by right-hander Casey Kebodeaux. He retired Helenihi before Dean grounded out to second for the second out. Dean’s grounder brought home McGhee to make it a one-run game. Clark then walked for the seventh time in the series. On the first pitch to Schimpf, Kebodeaux threw a wild pitch, bringing home Dishon for the tying run. Schimpf then grounded out to end the inning.

“I had to challenge our team before the sixth,” Mainieri said. “Micah Gibbs got in there and had some of the best cuts I’ve seen all year. Chris McGhee and Johnny Dishon had some great at-bats too.”

LSU reliever Ryan Byrd gave up back-to-back singles to open the seventh. Matt Bentley moved both base runners over on a sacrifice bunt. Paul Bertuccini came in to relieve Byrd. He struck out Wilson, but walked Rhoden to load the bases for Smith, who hit a long fly to center field that was tracked down by Landry for the final out of the inning.

LeMahieu notched his first hit of the game in the seventh, extending his hitting streak to nine games. He moved to second on a groundout by Landry. Gibbs hit a double over the head of Alabama’s center fielder, bringing home LeMahieu to take the lead. McGhee flied out to right. Dishon hit a shot to left center, causing Kubal and May to collide upon making the catch. However, Kubal secured the ball, ending the inning.

Helenihi added to the Tigers lead, launching his first home run as a Tiger in the bottom of the eighth. Dean and Clark flied out before Schimpf doubled down the left field line. He reached third on a wild pitch, but was left on base when LeMahieu struck out to end the inning.

The Tigers will travel to Hattiesburg, Miss. on Wednesday for a 6:30 p.m. game against Southern Miss.