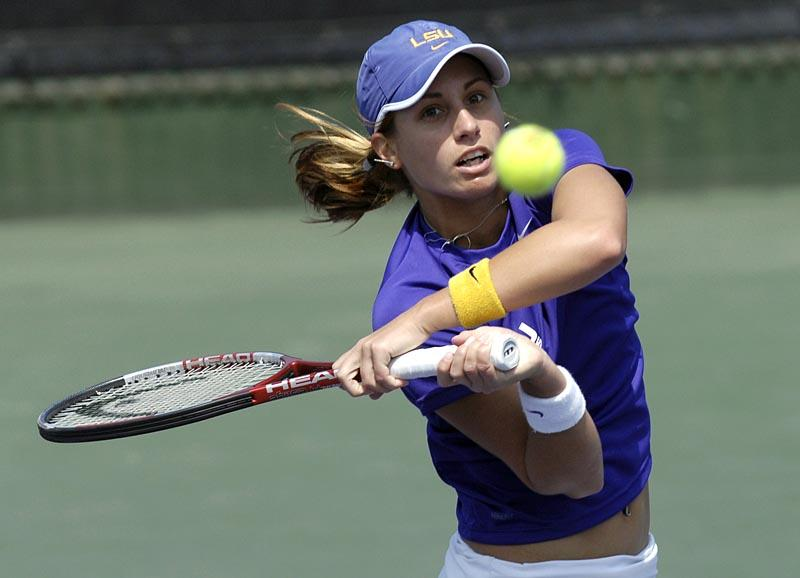 LSU (11-8, 4-5 SEC) started strong by sweeping doubles. Court three finished first as LSU’s Staten Spencer and Nicole Kantor cruised past Ole Miss’s Preethi Subramanian and Soledad Podlipnik, 8-3. Court one featured a battle of ranked duos, but it was the 29th-ranked Lady Tiger tandem of Megan Falcon and Mykala Hedberg who prevailed in convincing fashion, 8-2, over No. 32 Karen Nijssen and Nika Koukhartchouk.

“That was the most complete match we played this year,” LSU head coach Tony Minnis said. “We played great in doubles and started off in singles playing really well. I was really pleased, especially with the fact that Ole Miss had just knocked off two top-25 teams, so hopefully this will give us momentum to finish our match Wednesday against Mississippi State. We need to come out with the same type of effort and go from there.”

In singles, No. 18 Falcon finished first as she defeated Koukhartchouk, 6-1, 6-4. Falcon jumped out ahead 5-1 in the second set before Koukhartchouk fought back to win three straight games to make it 5-4. However, Falcon put LSU up 2-0 by winning the next game.

Not long after Falcon won, Spencer made it 3-0 in favor of LSU by knocking off Renaudin in straight sets, 6-2, 6-1. Robinson clinched the match for the Lady Tigers on court three as she cruised past van de Stroet, 6-4, 6-2. The win marked Robinson’s sixth straight victory.

Hedberg continued her strong play of late as she picked up her second straight ranked win by beating No. 99 Nijssen, 6-3, 6-2. Her win pushed the score to 5-0 LSU.

However, Kantor closed out the match by knocking off Subramanian in straight sets, 6-2, 6-3 to give LSU the win, 6-1.

LSU will return to the courts Wednesday at 10 a.m. to resume its match with Mississippi State that began Friday. When the match was suspended because of rain LSU was winning 3-0, but the Bulldogs led on two of the three remaining courts.