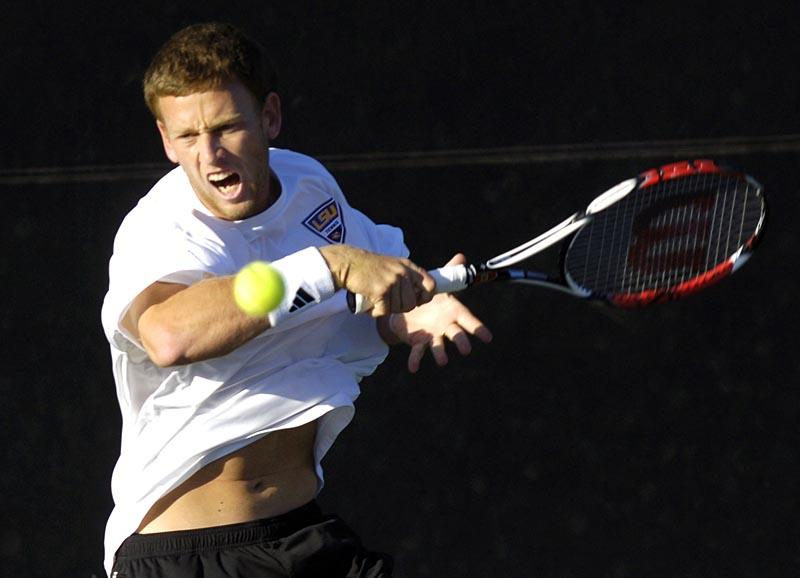 OXFORD, Miss. — The 16th-ranked LSU men’s tennis team slipped at the end of doubles and struggled on four singles courts Sunday afternoon at the Palmer/Salloum Tennis Center against seventh-ranked Ole Miss as it fell, 5-2, in what was a crucial Southeastern Western Division match.

With the win, the Rebels (17-4, 8-2 SEC) clinched their seventh-consecutive SEC West title. The loss drops the Tigers’ record to 12-7 overall and 5-5 in SEC play. LSU still owns a dominating lead in the all-time series against Ole Miss with a 43-12 record.

“We started off well in doubles and had chances on court three but it just didn’t happen,” said LSU head coach Jeff Brown. “In singles, we had a couple of guys do well with (Michael) Venus and (Sebastian) Carlsson. Sebastian continues to be consistent and play well in the SEC. We have to respond next weekend when we travel to Arkansas as we continue to try and stay among the top 16.”

Venus was the highlight of the match for the Tigers as the SEC Player of the Week knocked off a top-30 player for the second-straight Sunday.

Venus captured the first set from 30th-ranked Erling Tveit, 6-1. Tveit fired back by taking the second set, 6-3. The two battled to a tiebreaker in the final set where Venus came out on top to capture his sixth win against a ranked opponent this season.

Venus also shined in doubles as he and partner James Cluskey knocked off the fifth-ranked duo of Jonas Berg and Erling Tveit, 8-3. The Tiger tandem owns a 13-4 record this season.

After Cluskey and Venus won, Ole Miss won on court two to have court three decide the doubles point.

Carlsson and Jan Zelezny held a 6-5 lead against Jakob Klaeson and Tucker Vorster on court three. The Tiger tandem saw their lead slip away as the Rebels won three straight games to give Ole Miss the doubles point.

It was the first time in their last six matches that the Tigers had not won the doubles point.

Carlsson gave LSU its second point by cruising past Tucker Vorster, 6-3, 6-4, on court six. The win improves the three-time SEC Player of the Week’s win total to a team-high 24. Carlsson has won four straight matches and owns a 7-3 record in conference play.

The Tigers will close out the regular season next weekend when it travels to Fayetteville, Ark. to battle the Razorbacks on Saturday at 1 p.m.