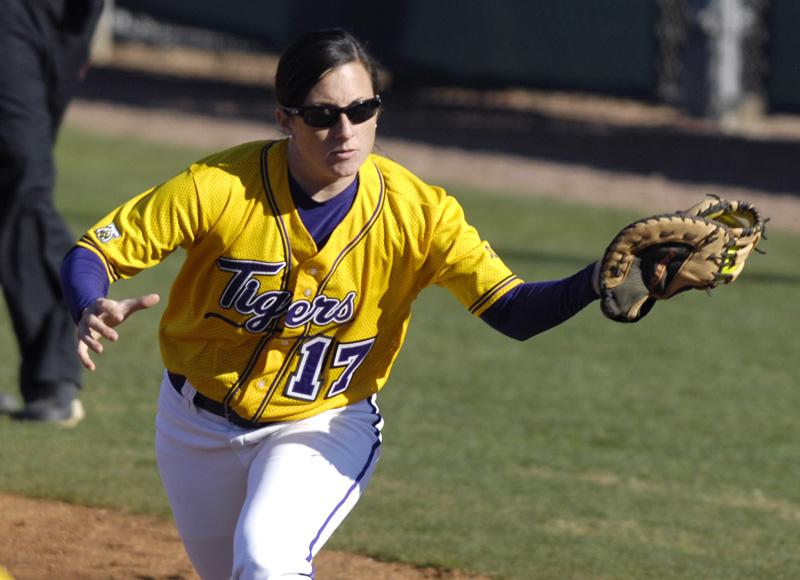 TUSCALOOSA, Ala. — The 10th-ranked LSU softball team dropped the series finale to No. 2 Alabama, 8-1, on Sunday afternoon at the Alabama Softball Complex.

The loss dropped the Tigers to 29-10 on the season and 8-6 in Southeastern Conference play. The Crimson Tide improved to 35-3 overall and 15-2 in league action. LSU is now in second in the SEC Western Division, holding the percentage point advantage over Auburn, sitting behind Alabama in the West and Florida overall.

“We are glad to get through this brutal stretch,” said LSU head coach Yvette Girouard about the Tigers’ six-game road trip against two of the top three teams in the nation. “Certainly this is not the outcome that I expected. But, now we’ve got to get home, work on some things, flush these two weeks and move on.”

In the bottom of the second inning, Alabama loaded the bases with no outs. After a leadoff double by Charlotte Morgan, Ashley Holcombe drew a walk. An infield single deep in the hole at shortstop by Lauren Parker loaded the bases. Nice back-to-back defensive plays by Tayl’r Hollis and Jessica Mouse got the runners at the plate for the first two outs before Hofer struck out Katie Johnson to end the inning.

The Crimson Tide loaded the bases again in the bottom of the third, but this time, the Tigers could not come up with the fourth out before Alabama put four runs on the board. Brittany Rogers led off with a double off the glove of Jazz Jackson on a diving attempt in center field. A walk to Praytor put runners on first and second. The pair were sacrificed to second and third before an intentional walk to Morgan loaded the bases with one out.

After Hofer retired Holcombe swinging, Parker singled to left center and advanced to second on the throw as Roger and Praytor scored and Morgan advanced to third. A double to right center by Kellie Eubanks scored Morgan and Parker. A walk to Larsen then put runners on first and second again. Trahan came on in relief of Hofer and struck out Johnson swinging to end the inning.

LSU got its first runner in scoring position in the top of the fourth. With one out, Rachel Mitchell reached and advanced to second on a fielding error by Rogers in center field. A two-out walk to Quinlan Duhon put runners on first and second. Hollis then hit a hard ground ball to the left side, but it was fielded by the third baseman before she stepped on the base for the third out.

Alabama added a run in the bottom of the fourth. Rogers led off with a walk and then stole second. On a sacrifice bunt attempt by Praytor, the throw ricocheted off of Praytor’s helmet and then off Shannon Stein‘s head and into right field. On the play, Praytor moved to second and Rogers scored. With two outs, Praytor stole third, before Holcombe flew out to center field to end the inning.

In the top of the fifth, the Tigers broke up the shutout bid. After Sluss hit a foul ball that was ruled foul and argued by Girouard, Sluss came back and hit a solo home run over the right center field fence. It was the second home run of the weekend for Sluss and the fourth of the season for the senior from Vista, Calif.

The Crimson Tide got the run back in the bottom half of the inning. Parker led off the inning with a double before a walk to Eubanks put runners on first and second. On a hard shot to third base, Mouse made an outstanding play to come up with the ball and tag the base for the first out.

An infield ground out by Johnson pushed Eubanks and Larsen to second and third. Rogers then hit a ball to shortstop, but Hollis bobbled the ball, allowing Eubanks to score. As the ball rolled away from Hollis, Larsen attempted to score from second and was thrown out at the plate by Stein.

In the bottom of the sixth, Alabama stretched its lead to seven. Praytor led off with a triple off the fence in center field. With one out, Morgan homered to left center, scoring Praytor and putting the Crimson Tide ahead, 8-1.

Morgan earned the complete-game win for Alabama to improve to 9-0 on the season. She allowed one run on four this with a walk and four strikeouts.

LSU returns to the road this week for a mid-week conference doubleheader at Kentucky. The Tigers will face the Wildcats on Wednesday at 3 p.m. CDT. LSU then returns home to host Ole Miss in a three-game series at Tiger Park next weekend. The Tigers will face the Rebels on Saturday in a doubleheader at 1 p.m. before concluding the series with a single game on Sunday at 1 p.m.