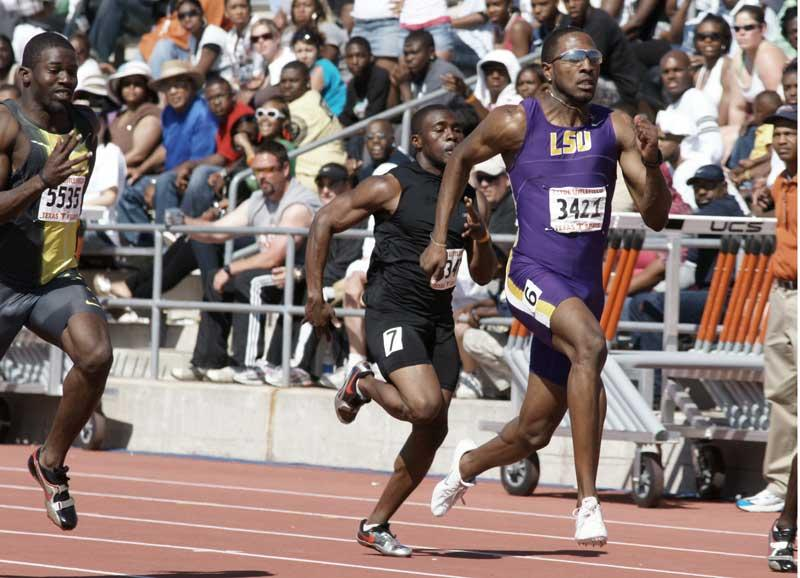 The senior from Cascade, Trinidad, had not run a 100-meter race all season, but walked away from the track with the top time in the world this season and a new personal best wind-legal time in front of a packed crowd of 15,931.

Thompson’s effort is also a new stadium record in the 10-year history of Mike A. Myers Stadium, eclipsing the previous mark of 10.06 set by American great Tyson Gay in 2004.

LSU’s previous school record of 10.02 did not even stand one calendar year after junior Trindon Holliday set the mark in the semifinal round at the NCAA Outdoor Championships in 2007. Holliday went on to finish runner-up to Florida State’s Walter Dix at the NCAA meet a year ago.

“I wasn’t focused on any particular time coming into the meet, but I’m obviously very happy with the way I ran today,” Thompson said. “I was expecting to run fast in the 100 when I ran on the backstretch (second leg) of the relay and saw that I was beating guys to the exchange that can run 10.1 and 10.2. I’m running with a lot of confidence right now.”

Thompson is coming off of an indoor season that saw him win his first career individual NCAA title after crushing his own school record in the 60-meter dash with an NCAA meet record time of 6.51 in the national final. He opened the season with the previous school record of 6.64.

“I have the confidence that I can beat the best sprinters in the NCAA,” Thompson said. “By the time June comes around and we go to the NCAA meet, people will be forgetting what happened indoors. I just want to prove to myself and to everyone else this outdoor season that I can be one of the greatest sprinters to ever come through LSU.”

Holliday won a 100-meter title of his own on the final day of the competition by becoming just the fourth Tiger all-time to win the men’s university 100 meters with a time of 10.20 in the final.

In addition to their individual titles, Thompson and Holliday helped lead the Tigers’ sprint relay team to its fifth straight Clyde Littlefield University 4×100-Meter Relay Championship with a seasonal best and the second-fastest time in the history of the Texas Relays at 38.74.

Thompson took the handoff from sophomore Armanti Hayes on the second leg and put the Tigers in front at the second exchange with freshman Gabriel Mvumvure. The Tigers maintained a slight lead on Texas A&M when Holliday got the stick from Mvumvure on the anchor and beat the Aggies to the finish line for the fastest time in the NCAA this season.

“I thought the men were very competitive today,” said LSU head coach Dennis Shaver. “I was especially pleased with the way they ran the 4×100 relay. This was really the first time they have lined up in a competitive race this season, and they showed the kind of potential they have.”

John Kosgei was approximately 15 meters behind Texas miler Kyle Miller when got the stick on the anchor and kept pace for three laps before sprinting past Miller with a 54.9-second final lap to win the race by 30 meters. The Longhorns finished second in the race with a time of 9:45.21.

The Lady Tigers were not without their share of excitement as senior Kelly Baptiste won the women’s invitational 100-meter dash and junior Nickiesha Wilson ran away with the event title in the women’s university 100-meter hurdles.

Wilson was the Lady Tigers’ first event winner of the afternoon as she fired out of the blocks and raced to the finish line with a new wind-legal personal best of 12.85. She ranks No. 3 in the nation this season and moves into a tie for sixth on the school’s all-time performance list. Senior Jessica Ohanaja finished third in the race with a seasonal best time of 13.21.

Baptiste followed with a new personal best of her own as she ripped up the straightaway in 11.06 to win gold against an outstanding field in the women’s invitational 100-meter dash.

Baptiste, who won her second career invitational 100-meter title at the Texas Relays and her first since 2006, also ran the anchor leg on the Lady Tigers’ 4×100-meter relay that finished runner-up to Texas A&M with the second-fastest time in the NCAA this season at 43.10.

“I’m also pleased with the performance of our women in the sprint relay,” Shaver said. “We came into this meet behind some of the other teams in that event because we haven’t really had as many opportunities to compete, but they lined up and competed with the best today. We still have some things we need to work out, but I’m happy with their performance.”

The Lady Tigers wrapped up the meet by winning their fourth title all-time in the women’s university 4×400-meter relay in the storied history of the Texas Relays and their first since 1995.

The men’s 4×400-meter relay team was not to be outdone as it clocked a seasonal best time of its own at 3:04.33. Hayes, Elkana Kosgei, Twijukye and senior Reggie Dardar finished runner-up to the foursome from Baylor as the Bears are the new NCAA leaders with a time of 3:02.38.

The Tigers and Lady Tigers made their presence felt at this year’s Texas Relays as they combined for a total of four relay titles and four individual event winners. Four relay titles is the most LSU has won at the Texas Relays since winning four in 2004, while the squads have never combined to win four individual events in the storied history of the meet.

“I thought both teams did a lot of growing up this weekend,” Shaver said. “Our kids showed up to the meet ready to compete, and I thought they represented LSU very well over the course of three days. It’s special any time you’re able to win one title at the Texas Relays because you’re talking about 81 years of history. To win eight in one weekend says a lot about their competitiveness.”

The Lady Tigers also added one new NCAA regional qualifier during Saturday’s action as senior Andrea Linton recorded a mark of 42 feet, 4 ? inches in the triple jump. Junior hurdler Patrick Lee improved his regional qualifying time in the 400 hurdles with a personal best time of 50.94.

The Tigers and Lady Tigers will be at home for back-to-back weekends as they play host to the Tiger Invitational on April 12 and the LSU Alumni Gold on April 19 at the Bernie Moore Track Stadium. They will then wrap up the regular season with their annual trip to Philadelphia, Pa., to compete in the prestigious 114th Penn Relays at historic Franklin Field.

LSU’s Qualifiers for the 2008 NCAA Mideast Regional Championships (as of April 5, 2008)