No. 2 Alabama Takes Two Games from No. 10 Softball 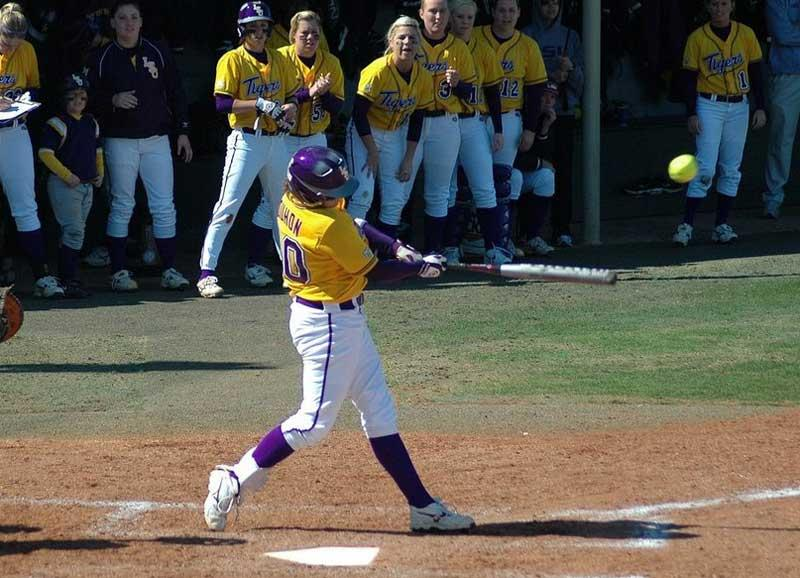 TUSCALOOSA, Ala. — After a gut wrenching 9-8 loss in 10 innings in game one, the 10th-ranked LSU softball team fell, 8-0, in five innings to No. 2 Alabama on Saturday afternoon at the Alabama Softball Complex.

The losses dropped the Tigers to 29-9 on the season and 8-5 in Southeastern Conference play. The wins bumped the Crimson Tide up to 34-3 overall and 14-2 in league play. The pair will meet in the series finale on Sunday at 1:30 p.m.

With LSU leading 4-0 going into the bottom of the sixth of the first game, Alabama got back to within one with a swing of the bat on a two-out three-run home run. The Tigers had jumped out to the lead early in the game on a pair of home runs by Erika Sluss and Quinlan Duhon and an RBI triple by Dee Dee Henderson.

“You have to give credit to Alabama, but we did not have anyone step up in the circle when we needed it,” said LSU head coach Yvette Girouard. “They are a dangerous offensive team and we knew that.”

The Crimson Tide tied the game up in the bottom half of the seventh without recording a hit. Three walks loaded the bases with two outs. Kellie Eubanks was then hit by a pitch to score the tying run. LSU battled back to take a two-run lead in the top of the ninth on a two-RBI double by Jazz Jackson. A two-run home run by Lauren Parker in the bottom half of the inning tied it up again for Alabama.

In the top of the 10th, the Tigers took the two-run lead once again. Tayl’r Hollis came through with a two-out two-run home run that once again put LSU ahead by two and needing only three outs for the win. Unfortunately, the Crimson Tide instead got a three-run walk-off home run by Charlotte Morgan to win the game, 9-8.

“When you get up two in extra innings, you think you have the game won,” said Girouard. “But we didn’t have anything in the circle today.”

The first game took the steam out of LSU’s bats as the Tigers failed to score and recorded only two hits in game two. Alabama got a run in the first, three in the second and four in the fifth to earn the doubleheader sweep.

“Shame on us because it completely deflated us,” Girouard said of the tough loss in game one. “There’s no question that it got to us a little bit.”

Tiffany Garcia relieved Hofer with no outs in the bottom of the ninth. Garcia did not allow a run on two hits with a walk in two-thirds of an inning. Trahan then came back on with two outs in the ninth and threw the rest of the way. In her final third of an inning, Trahan, allowed three runs on a home run with a walk. The loss dropped Trahan to 10-3 on the season.

In the top of the inning, the Tigers jumped out to a 2-0 lead. Duhon hit a single to left field, the first hit recorded off Alabama pitcher Kelsi Dunne in 14 and a third innings. With two outs, Sluss drove a 2-2 pitch over the fence in left field, scoring Duhon for the lead. It marked the third home run of the season for Sluss and the 30th of the year for LSU.

A home run in the top of the fourth stretched the Tigers’ lead to three. With two outs, Duhon easily took a 2-1 pitch over the fence in center field. The hit was the second of the game for Duhon and the sixth home run of the year for the senior. The 23rd home run of Duhon’s career also put her into a tie for sixth most career home runs in LSU history.

Duhon also got it done with her glove. The Youngsville, La., native, came back to make a home-run saving catch on the first batter in the bottom half of the fourth. Charlotte Morgan drove a pitch to left field that would have cleared the fence for a home run, but Duhon went up the fence and reached over, pulling the ball back in for the first out of the inning.

The Tigers pushed their lead to 4-0 with two outs in the top of the fifth. Shannon Stein dropped a bloop single in no-man’s land just behind the pitcher for a single. Henderson then took a 3-2 pitch through the right side and into right center just beyond the glove of the center fielder and rolled all the way to the fence. Henderson reached third for her second career triple on the hit as Stein came all the way around to score.

A great defensive play got LSU out of a tough spot in the bottom of the fifth and keep Alabama scoreless. Eubanks led off with a walk, the first issued by Trahan in the game. A single to left field by Whitney Larsen put runners on first and second with no outs and the top of the Crimson Tide line-up coming to the plate.

Trahan then got leadoff batter Brittany Rogers to ground out to first as Eubanks and Larsen advanced to second and third. After Trahan struck out Jordan Praytor for the second out, Stein make an outstanding play from her knees on a ball deep in the hole at second to get Dani Woods going to first to end the inning.

With two outs in the bottom of the sixth, Alabama broke up the shutout. Trahan put herself in a tough spot by hitting two of the first three batters of the inning to put runners on first and second. On a deep fly ball to left center, Cat Dozier tagged up from second and moved to third to put runners on the corners with two outs. Kellie Eubanks then hit her fifth home run of the season on a 3-2 count to put the Crimson Tide within one, 4-3.

After a single by Larson, Hofer came on in relief of Trahan in the circle. Brittany Rogers then doubled to center field, sending Larson to third. With the go-ahead run on second, Hofer struck out Jordan Praytor looking to end the inning.

Alabama tied it up without a hit in the bottom of the seventh. Three walks loaded the bases with two outs. Eubanks was then hit by a pitch to score the tying run. With the winning run at third, Hofer got a full count fly out by Larsen to end the inning and send the game to extra innings.

LSU pulled ahead once again in the top of the ninth. Jessica Mouse led off with an 11-pitch walk. With one out, Henderson singled up the middle to put runners on first and second. Jackson then came through with a double to left center that scored Mouse and Jackson for the 6-4 advantage. On a single up the middle by Rachel Mitchell, Jackson was thrown out on a play at the plate to end the inning.

Hofer got in trouble once again in the bottom half of the inning and this time it cost her again. After hitting the leadoff batter, Lauren Parker tied the game up with a home run to right field. Tiffany Garcia then came on in relief of Hofer with no outs. Garcia walked the first batter, Ashley Holcombe, who was sacrificed to second.

Larsen then singled to center field, sending Holcombe to third. On a hit and run, Rogers swung and missed and Holcombe was thrown out in a run down between third and the plate as Larsen went to second. A single by Rogers then pushed Larsen to third. After Rogers stole second to put runners on second and third, Praytor flew out to Duhon in left field to end the inning.

Starting with Mitchell on second for the international tie breaker, she moved to third on a sacrifice bunt by Roessner. On a fielder’s choice by Duhon, Mitchell was caught in a rundown between third and the plate and was thrown out as Duhon moved to second. Hollis then came through with a two-out home run to put the Tigers ahead, 8-6.

With Praytor on second to start the bottom half of the inning, Woods drew a walk to bring the winning run to the plate. Morgan then won the game on a walk-off three-run home run to give Alabama the 9-8 win in 10 innings.

Chrissy Owens earned the win in relief for the Crimson Tide to remain undefeated at 11-0 on the season. She came on in the 10th and allowed two runs on a hit with a strikeout. Kelsi Dunne started and threw the first nine innings. She allowed six runs on 11 hits with two walks and nine strikeouts.

Alabama got on the board in the bottom of the first in the nightcap. With two outs, Woods hit her fifth home run of the season, a solo shot to left center, to put the Crimson Tide ahead, 1-0.

In the bottom of the second, Alabama stretched its lead to 4-0. Holcombe singled through the right side to lead off the inning. A double to left field by Eubanks sent Holcombe to third. Larsen drew a full-count walk to load the bases. A single through the left side by Rogers scored Holcombe and Eubanks.

After Garcia came on to relieve Faile, Rogers moved to second on a sacrifice bunt. A walk to Woods loaded the bases once again before Larsen scored on a fielder’s choice by Morgan as the Crimson Tide pulled ahead, 4-0.

Alabama earned the run-rule win with four runs in the bottom of the fifth. Back-to-back singles by Parker and Holcombe led off the inning. With two outs, Rogers singled in Parker to give the Crimson Tide the five-run lead. Praytor came through with the big blow for Alabama on a two-RBI triple that scored Holcombe and Rogers. A single by Woods scored Praytor to end the game.

Morgan started and earned the complete-game shutout win. She allowed only two hits with two walks and four strikeouts to improve to 8-0 on the season.