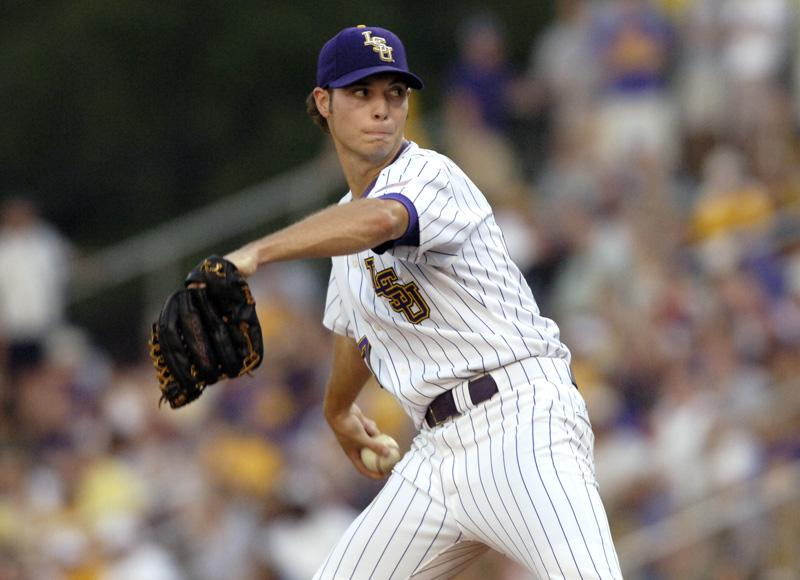 The teams meet in the series final at 1 p.m. Sunday.

The Tigers defeated the Crimson Tide, 3-0, earlier Saturday in the completion of a suspended game behind stellar pitching by Blake Martin, Jared Bradford and Daniel Bradshaw.

“It was a long day,” said LSU head coach Paul Mainieri. “This was a great ballgame. Both teams were playing hard, and both teams wanted to win very badly. Unfortunately, we couldn’t get the hit at the end of the game when we needed it.”

The Tigers struck first at the plate when Derek Helenihi scored in the first off a DJ LeMahieu single to left field.

LSU starter Jordan Brown gave up three runs on two hits in the second inning. However, the Tigers responded at the plate. Leon Landry doubled down the right field line and came home on a Micah Gibbs single after advancing to third on a passed ball. Gibbs moved to second on a Johnny Dishon grounder, and then advanced to third and home on consecutive wild pitches to tie the game at 3-3.

Johnny Dishon, who had hit his first career home run in Game 1, tripled off the top of the right field wall in the bottom of the fourth. He came home on a sacrifice fly by Ryan Schimpf, giving the Tigers a 4-3 lead.

Brown was marvelous again in the fifth, retiring three straight Alabama batters. However, he found himself in trouble in the sixth. The junior college transfer walked Alex Avila before giving up a double to Brandon May. He then struck out Ross Wilson before Jake Smith hit a sharp grounder to shortstop. LeMahieu chose to throw Smith out at first, allowing Avila to tie the game and May to advance to third. Mike Sharp brought home May on a single to take the lead. Brown gave up a final hit before the inning ended.

With two pitchers in the bullpen, Brown stepped to the mound again in the seventh. He walked Tyler Odle before he was relieved by Shane Ardoin. In six innings, Brown struck out seven while giving up three earned runs.

Ardoin forced Avila to line out to Clark, who was able to double up Odle. Ardoin struck out May to end the seventh.

Schimpf walked in the seventh before Helenihi hit a shot that hit the top of Wilson’s glove at second base before dropping into center field. Dean very nearly hit a three run home run, but the ball was caught at the wall by May. Clark worked a full count before walking to load the bases for LeMahieu. He walked, bringing in the tying run. Rene Escobar grounded out to second, stranding three runners.

Bradshaw, who earned his third save of the season in Game 1, came on in relief in the eighth. He retired the side in the inning.

Gibbs hit a double up the left field line to open the bottom of the eighth. He was replaced on the base paths by Chris McGhee. Schimpf reached base on a walk with two outs. However, Helenihi lined out to first base to end the inning.

Sharp reached base on an infield hit in the top of the ninth and moved to second on a Kubal sacrifice bunt. Bradshaw plunked Josh Rutledge in the back to put him on base, and Odle walked to load the bases. However, Bradshaw forced Avila to ground into an inning-ending double play.

After a Dean groundout, Clark walked to put the winning run on the base paths for the Tigers. He was replaced by Jared Mitchell, who caught a touchdown as a wide receiver in the spring football game earlier in the day. Helenihi showed patience at the plate, walking for the second time in the game. However, Escobar grounded into a double play to end the Tigers’ threat and send the game to extra innings.

Bradshaw retired the first two batters of the tenth, before Wilson hit a slow chopper towards third. Helenihi’s throw to Buzzy Haydel at first was off target, allowing Wilson to reach third. Wilson was left stranded when Smith grounded out to first.

Kubal knocked a base hit up the middle in the top of the eleventh and reached third on a hit and run. Odle laid down a squeeze bunt directly in front of the batter’s box that brought Kubal home for the go-ahead run.

Bradshaw (1-3) was charged with loss, pitching four innings and striking out two. Alabama reliever Josh Copeland (2-1) earned the victory, limiting the Tigers to no runs on two hits in 4.1 innings with six walks and five strikeouts.

BATON ROUGE — LSU blanked Alabama 3-0, Saturday, in the first game of an SEC series behind strong pitching from Jared Bradford. The shutout was the first suffered by the Crimson Tide (16-14, 4-6 SEC) this season.

Game 1 of the series started on Friday night, but was called after three innings due to severe thunderstorms in the Baton Rouge area. The game resumed at 1 p.m. CT Saturday.

Game 2 of the series will be played at 7:30 p.m. Saturday in Alex Box Stadium. The series finale starts at 1 p.m. Sunday.

“These are big games,” said LSU coach Paul Mainieri. “Obviously, we got one, but now we are going to try and get another one tonight.”

LSU starter Blake Martin made quick work of the Crimson Tide in the first inning on Friday, using only six pitches to bring the Tigers to the plate.

Alabama starter Austin Hyatt (2-3) struck out the first three Tiger batters he faced. However, Blake Dean reached first after swinging at a wild pitch for his third strike. Matt Clark walked, bringing DJ LeMahieu to the plate. He hit what looked to be a double to right field, but Alabama’s Kent Matthes made a spectacular diving catch to end the inning.

Martin came back strong again in the second, striking out two in the second. Jake Smith was plunked by a Martin pitch with one out in the third, but was caught stealing by Micah Gibbs. Josh Rutledge legged out an infield single, but was left stranded after Derek Helenihi, getting the start at third base, made an outstanding throw to first for the third out.

The rain started again in the bottom of the third. The game was suspended at 8:08 p.m. and called at 8:42 p.m. with Ryan Schimpf on first and Helenihi at the plate with a 0-0 count.

LeMahieu laced a single right up the middle in the bottom of the fourth. Sean Ochinko hit a grounder down the third base line, but the ball was nabbed by Smith, and Ochinko was thrown out. LeMahieu attempted to advance to third on the play, and the ball was thrown over Smith’s head by first baseman Matt Bentley, allowing LeMahieu to score the first run of the game.

LSU expanded its lead in the fifth. Bradford continued his dominance on the mound, retiring his sixth straight batter of the game. At the plate, Johnny Dishon hit his first career home run to right field. Schimpf followed with a single, and advanced to second on a Helenihi grounder. Dean brought Schimpf home with a line drive single to right, putting the Tigers up 3-0.

Bradford used only seven pitches to get through the sixth. He gave up his first hit in the top of the seventh when Alex Avila hit a double to right field. He gave up another hit in the eighth and in the ninth.

A scary moment occurred for the Tigers in the top of the ninth when Bradford took a line drive off his shin before recording the first out of the inning. Bradford was relieved by freshman right-hander Daniel Bradshaw.

“(Bradford) was having trouble in his wind-up,” said Mainieri. “I didn’t want to take any chances with the kid.”

Bradshaw was credited with his third save of the season as he retired the final two Crimson Tide batters.