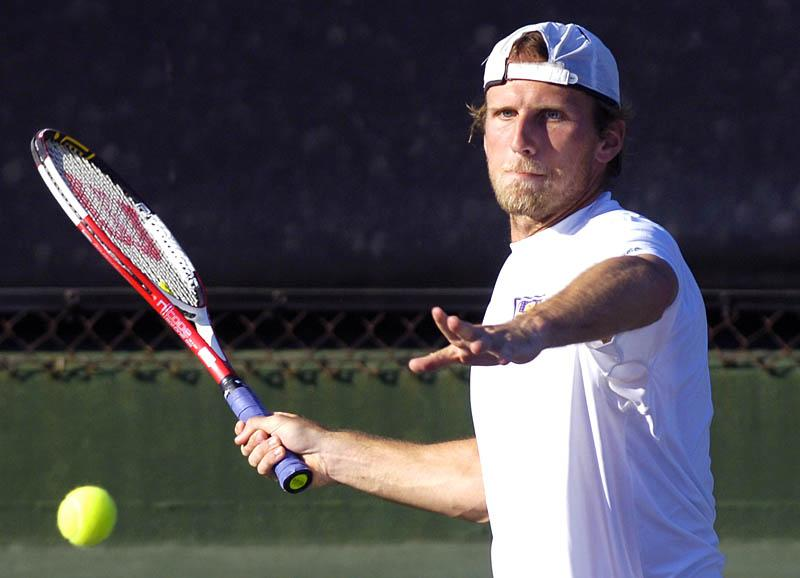 The match was originally scheduled for Friday but was pushed to Saturday due to inclement weather. Mother Nature postponed the match again Saturday morning for 45 minutes.

The win improves LSU’s record to 12-6 overall and 5-4 in the Southeastern Conference. The loss drops Mississippi State’s record to 8-9 overall and 2-7 in conference play.

LSU is tied with Alabama for second in the Southeastern Conference Western Division with a 5-5 record. Seventh-ranked Ole Miss sits atop the west with a 7-2 record after defeating Arkansas, 6-1, at home Friday.

The Tigers and Rebels square off Sunday at 1 p.m in the Palmer/Salloum Tennis Center. With a win Sunday, Ole Miss would clinch the SEC West title. Ole Miss won last season’s meeting in Baton Rouge by a 4-3 mark.

Senior Jan Zelezny, ranked No. 118 in the country, clinched the match for the Tigers by upsetting 57th-ranked Philippe Frayssinoux on court two. The win is Zelezny’s 20th of the season and ends a five-match skid for the 6-foot senior.

“Jan showed a lot of heart and fight in his match and picked up a big win,” said LSU head coach Jeff Brown. “Kevin (Dessauer) and James (Cluskey) did a great job of putting us in that position for Jan to clinch. We showed nice effort in doubles. I am proud of our guys performance today.”

After falling in the first by a 6-2 mark, Zelezny retaliated by taking the second set, 6-4. Zelezny controlled the final set by taking it by a 6-2 score to clinch the win for the Tigers.

LSU captured the doubles point for the 14th time out of their 18 matches by picking up wins on court two and three.

Dessauer was the first Tiger to pick up a victory in singles by defeating Ryan Farlow in straight sets, 6-0, 6-2. The win improves the second-team All-SEC honoree to 19-9 on the season and 7-1 in SEC play.

Carlsson and Artem Kuznetsov split the first to sets in their match with a tiebreaker in each. After Zelezny clinched, Carlsson cruised in the final set by blanking Kuznetsov, 6-0, to close out the day and improve LSU’s win to a 5-2 score.

The Tigers had little time to celebrate their victory after the match as they immediately left Starkville to head to Oxford for their battle against the SEC West-leading Rebels.

“This is the time of year where you have to play two matches in a row and we will use it to prepare for the postseason,” Brown commented. “We will prepare physically as we possibly can for the match.”