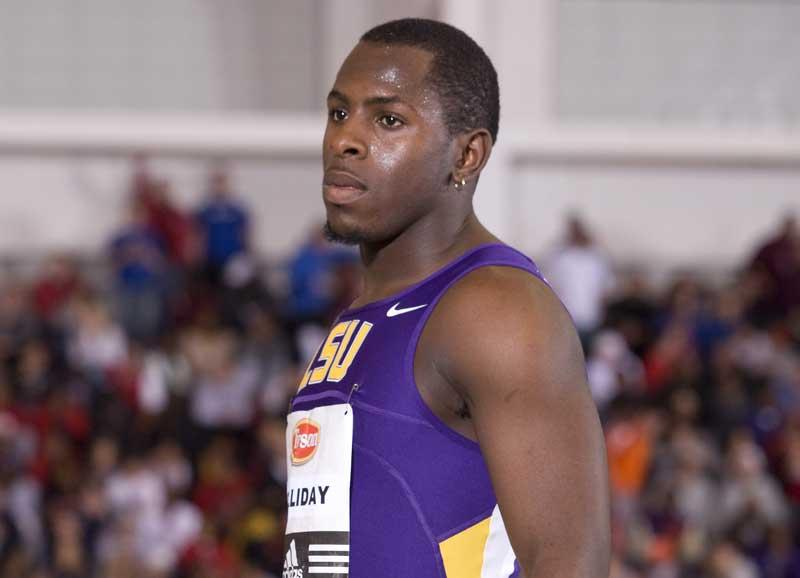 AUSTIN, Texas — Two-sport star Trindon Holliday made his outdoor season debut in the 100-meter dash during Friday’s action at the 81st Clyde Littlefield Texas Relays and clocked a wind-aided NCAA regional qualifying time of 10.38 seconds to win his preliminary heat.

Holliday, who was the national runner-up in the event a year ago, clocked the third-fastest prelim time of the morning session to qualify for the final scheduled for Saturday at 4 p.m. CDT.

The junior from Zachary, La., also anchored the Tigers’ 4×100-meter relay to a seasonal best time of 39.73 for the second-fastest time in the prelim round despite a steady rain falling on the track and temperatures dipping into the 40s during the morning session at Mike A. Myers Stadium.

This marks the first time this season that LSU’s top sprint relay team has gotten the stick around the track as sophomore Armanti Hayes, senior Richard Thompson and freshman Gabriel Mvumvure handled the stick before giving way to Holliday on the anchor leg.

“The conditions made it really difficult on all of the athletes competing during the morning session, but I’m pleased with the way our kids handled the adversity and competed in the swirling winds and rain,” said LSU head coach Dennis Shaver. “The guys ran a really conservative race today, so we’ll see how good they really are when they line up tomorrow.

“The weather is supposed to be much better when we line up for the first time tomorrow, so we’re looking forward to a very competitive Saturday of races at the Texas Relays.”

The women’s 4×100-meter relay team also qualified for Saturday’s championship action during the morning session as the foursome of senior Jessica Ohanaja, sophomore Samantha Henry, senior Juanita Broaddus and senior Kelly Baptiste got the stick around the track with the fastest time of the preliminary round at 44.19. The finals of the 4×100 relays are set to begin at 2 p.m.

The squads enjoyed a successful day of qualifying as five other athletes advanced to Saturday’s competition despite the harsh conditions during the morning session.

While Holliday highlighted LSU’s individual qualifiers by making his season debut in the 100-meter dash, Mvumvure also advanced to the championship final of the university division of the 100 meters with the seventh-fastest prelim time at 10.46 with a 4.9 meters-per-second tailwind.

Senior Ryan Fontenot was the only other Tiger to advance beyond Friday’s preliminary action as he crossed the finish line with a wind-aided time of 13.98 in the 110-meter hurdles.

The Lady Tigers matched the Tigers’ effort with three qualifiers of their own as junior Nickiesha Wilson and Ohanaja finished 1-2 in the prelims of the women’s 100-meter hurdles with times of 13.11 and 13.36, respectively, while freshman Kenyanna Wilson was the third-fastest qualifier in the 100-meter dash with a wind-aided time of 11.53.

Wilson’s effort was a seasonal best in the sprint hurdles as she improved her already established regional qualifying time of 13.19 set at the LSU Tiger Relays in Baton Rouge last weekend.

The Lady Tigers added one new regional qualifier during the afternoon session as senior Nedra Gross punched her ticket to the 2008 NCAA Mideast Regional Championships later this spring with a qualifying wind-aided mark of 40 feet, 11 ? inches in the triple jump. The squads have now combined to qualify 31 individuals and four relay teams into the regional meet.

The Lady Tigers’ sprint medley relay foursome was disqualified after Baptiste and senior Deonna Lawrence passed the baton outside the exchange zone on the second exchange.

Sophomore Katelyn Rodrigue will kick off Saturday’s action in the field events by competing in the women’s pole vault competition at noon. Junior Patrick Lee will be LSU’s first athlete to step onto the track as he is scheduled to run in the finals of the men’s 400-meter hurdles at 12:28 p.m. Live results of the final day of the Texas Relays will be provided by www.texassports.com.

LSU’s Qualifiers for the 2008 NCAA Mideast Regional Championships (as of April 4, 2008)