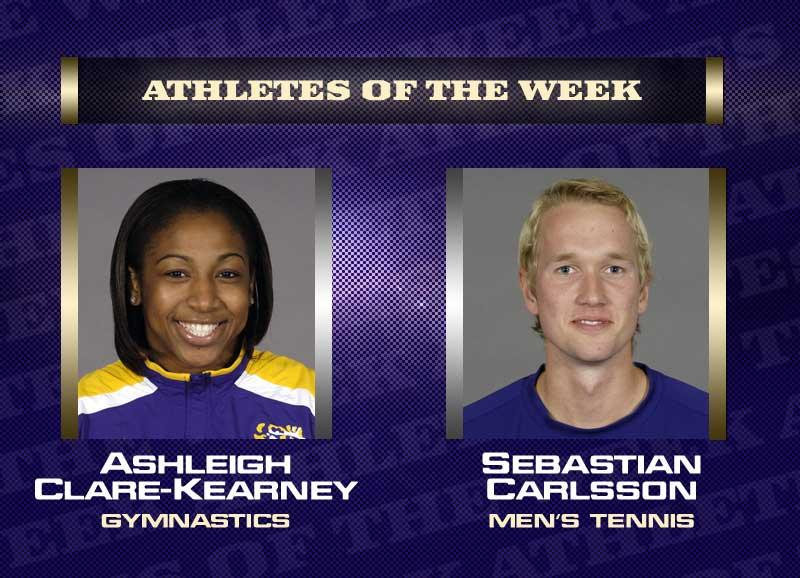 Carlsson led men’s tennis to a pair of wins last weekend over South Carolina and eight-ranked Florida, clinching the win over the gators in his biggest win of the season. He went 3-0 over the weekend and leads the team in wins with 22.

Clare-Kearney captured the all-around title at the SEC Gymnastics Championships in Duluth, Ga. with a score of 39.600 last weekend. The title is the first of her career. She also tied for first place in the floor event with a score of 9.950.

Clare-Kearney was also named SEC Co-Gymnast of the year. She is only the second LSU gymnast to win the award.

Was the top performer during the SEC Championships on March 29 in Duluth, Ga. … Captured the all-around title with a score of 39.600 … Also the Tigers’ top performer in three of the four individual events … Tied for the floor event title, posting a 9.950 … Tied for sixth on the bars with a 9.925 … Tied for seventh on the bars with a 9.875 … Also tied for seventh on the beam with a 9.850 … Was named the SEC Co-Gymnast of the Year, along with Lindsey Puckett of Auburn … Is only the second LSU gymnast to win the award.

Clinched both of LSU’s victories this past weekend. Carlsson’s biggest win of the season came Sunday when he clinched LSU’s upset victory over eighth-ranked Florida in the last match with a 6-4, 2-6, 6-1 win against Erik Corace. He clinched LSU’s win over 70th-ranked South Carolina by breezing past David Wolff, 7-5, 6-2. The Sweden native leads the Tigers in wins this season with 22. 18 of Carlsson’s wins have come in straight-sets. Carlsson and doubles partner Jan Zelezny’s 8-3 win against Florida’s Geoffery Barton and Tyler Hochwalt proved to be crucial as Florida won on court two and LSU ended up winning by a 4-3 margin.