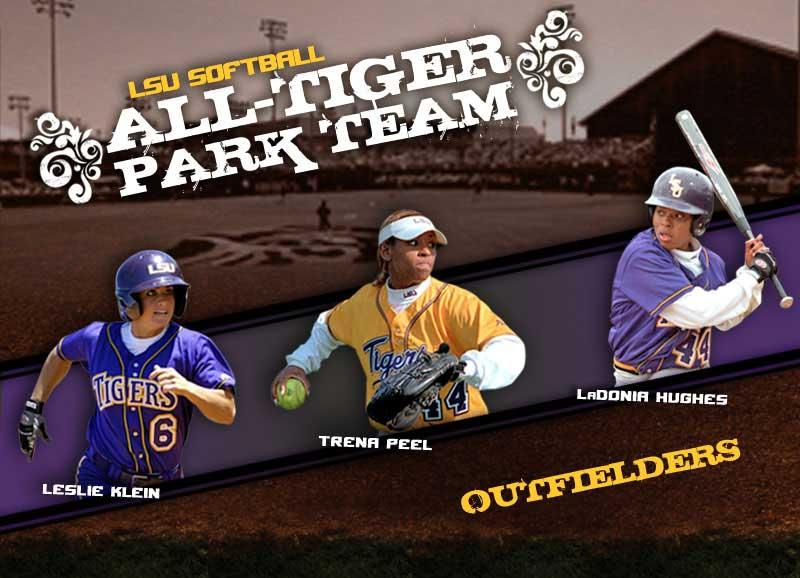 BATON ROUGE — In celebration of the final season of Tiger Park, LaDonia Hughes, Leslie Klein and Trena Peel were named to the All-Tiger Park team for the outfield.

A two-year letterwinner from 2003-2004 after transferring from Lake City Community College, Hughes earned second-team All-America honors as a senior and was selected the Louisiana Hitter of the Year. The Farmville, Va., native, did not commit an error in two seasons and was the last LSU player to record an inside the park home run. Despite playing on two years, she ranked in the top 10 in Tiger career history in stolen bases, runs scored and doubles.

A four-year letterwinner from 2004-2007, Klein was a three-time NFCA All-America selection, one of only two players in LSU history to record three All-America honors. Making her mark on the Tiger record books, the Sunrise, Fla., native, broke the LSU single-season and career records for doubles, while also breaking the records for career slugging percentage, home runs, RBIs and total bases.

A four-year letterwinner from 1999-2002, Peel was named the SEC Athlete of the Year and a second-team NFCA All-American as a senior. Spending four years patrolling the LSU outfield, the Aurora, Colo., native, was a three-time All-SEC selection and a two-time NFCA All-South Region selection. In 2001, she participated with the USA National Red Team and was a 2002 semifinalist for the USA Softball Collegiate Player of the Year. As a senior, she led the nation in triples with an LSU and SEC record 14 triples.