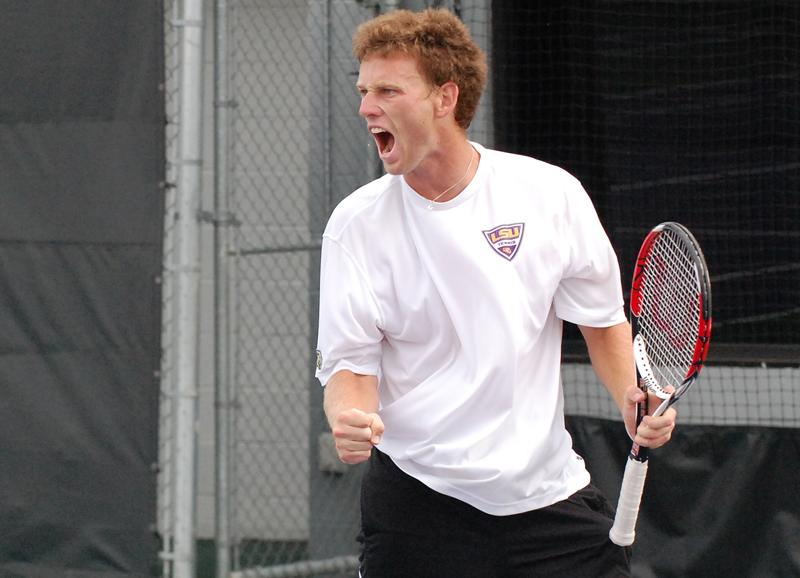 STARKVILLE, Miss. — The 16th-ranked LSU men’s tennis team will begin a three-match road swing to close out the regular season Friday at 2 p.m. when it battles Mississippi State in the A.J. Pitts Tennis Centre.

The Tigers (11-6, 4-4 SEC) hope to continue their momentum from this past week where they put together their strongest weekend of conference play with a dominating win against 70th-ranked South Carolina, 6-1, on Friday and a thrilling upset win over eighth-ranked Florida, 4-3, on Sunday.

The Bulldogs (8-8, 2-6 SEC) have lost three straight matches, most recently to Vanderbilt, 4-3, this past Sunday. Per Nilsson is in his first year as Mississippi State’s head coach.

LSU defeated Mississippi State last season by a 6-1 margin. The Tigers own a dominating 41-15-1 lead in the all-time series against the Bulldogs.

LSU is tied with Alabama for second in the Southeastern Conference Western Division with a 4-4 record. Mississippi State is in sixth place in the west with a 2-6 record. Seventh-ranked Ole Miss sits atop the west with a 6-2 record. The Tigers and Rebels square off Sunday at 1 p.m.

“I feel like we have played our best tennis in the last half of the season,” LSU head coach Jeff Brown said. “We have really developed as a team and that could also be said for Mississippi State.”

LSU’s revamped doubles lineup has been key to the Tigers improved play in the second half of the season. Since LSU settled on its current doubles lineup against 17th-ranked Rice, it has claimed the early point in five-straight matches.

The junior pair of James Cluskey and Michael Venus has highlighted LSU’s doubles dominance. The Tiger tandem owns a team-best 12-3 record and has claimed victory in four of its last five matches. Their recent success put them in the rankings at No. 30.

Venus, who was named the SEC Player of the Week, is also listed in the singles rankings at No. 47. The Orlando, Fla. native owns a 11-7 record and owns five wins against ranked opponents. Senior Jan Zelezny is listed at No. 118 with a 19-14 record.

Freshman Sebastian Carlsson leads the team in wins with 22 this season. The three-time SEC Player of the Week clinched LSU’s last match against eight-ranked Florida on Sunday.

Mississippi State’s top player, Ivan Bjelica, is listed at No. 26 in the singles rankings. Bulldog Philippe Frayssinoux is also ranked as he appears at No. 57.