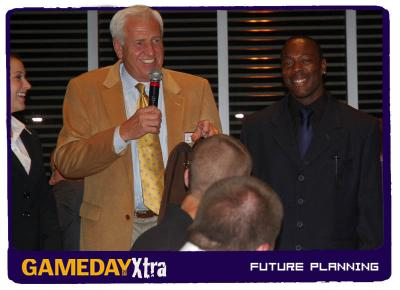 For one night, Ryan Byrd and Matt Gaudet left their New Era hats and Russell Athletic jerseys at Alex Box Stadium in favor of button-up shirts and ties.

Fresh off defeating Arkansas two games out of three, where in one game Gaudet slammed a walk-off home run in the bottom of the 11th, these Tigers weren’t preparing for their upcoming games against in-state rivals Northwestern State and New Orleans.

Instead, they were preparing for something of far greater importance ? their future.

These two ballplayers, along with 75 other LSU student-athletes, took part in a career symposium held at the Stadium Club at Tiger Stadium on Monday, March 24. The event, put on by the Shaquille O’Neal CHAMPS/Life Skills Program, was a huge success.

“The reason we are here is because this is an unbelievable opportunity for all of the athletes,” explained Byrd, taking part in his second seminar in as many years.

For one night, these athletes took a break from practicing something they might only be a part of for a few more years to focus on preparing for their future. Instead of getting tips from coaches on how to approach a specific opponent, these athletes listened to 21 professionals in fields ranging from pharmaceutical sales to education, on how to approach the most dreaded part of applying for a job ? the interview.

Laurence Stuart, the CEO of College to Career Guidance Seminars, spoke on various topics with the athletes as they dined on grilled chicken, green beans and roasted potatoes. Stuart, who speaks to more than 40 colleges a year, stresses the importance of the nerve-wracking job interview.

“People spend the better part of 16 to 20 years preparing themselves academically for a job,” stated Stuart, a former photographer in the LSU sports information department. “We spend zero hours preparing ourselves to get the job.”

He started his speech by demonstrating simple, yet important, parts of an interview, such as proper dining etiquette if the interview is set in a restaurant and how to perform a quality handshake.

“The handshake is critically important,” stressed Stuart.” They must practice it.”

As simple as a handshake sounds, Stuart went through steps with student volunteers on how to execute the perfect greeting. His tips included using the same amount of pressure as the person giving the handshake, but making sure the crevice between the thumb and index fingers extend to the opposing hand.

Stuart took a brief breather to allow the athletes to converse with the professionals who graciously donated their time for the evening. Byrd and Gaudet sat with men’s basketball players Chris Johnson and Alex Farrer at the table designated for Forest Pharmaceuticals, whose corporate offices are based out of St. Louis, Mo. They chatted with Greg Fontenot, a former LSU baseball player and current division manager for Forest Pharmaceuticals. Also at the table was Fontenot’s co-worker, Ken Williams, who is also a division manager.

“I attended this event four years ago, which I think was the first one,” explained Williams, a former offensive lineman at Ole Miss.  “I was very impressed with it. It’s really something these athletes should take advantage of.”

That advice is something the athletes shouldn’t take lightly. Just being at the event puts them a step ahead of other people who might be competing for the same job.

“Greg was telling me about a girl that works for us today who was at this event in 2003,” added Williams. “Within a year of meeting her here, she was hired. She made a great impression. She followed up and she was very impressive. It’s good to be able to be here and talk to these people. It puts a face to a resume.”

Just the fact that they are athletes isn’t what gets them the job. It’s what athletics has taught them over the years, especially during college.

“They have time management skills like nobody else,” said Lloyd Peever. He knows from personal experience; Peever was a fourth-round draft choice of the Colorado Rockies in 1992 after winning the 1992 Collegiate Baseball National Player of the Year award with a 14-0 record as a starting pitcher for the Tigers.

“These kids have to manage a normal social life, their athletic abilities and their academics,” added Peever, a senior executive sales representative for GlaxoSmithKline, another pharmaceutical sales company. “To be able to do all of that makes them become an adult a lot sooner than other graduates. The athletes that are the most successful in all three of those things will then find in the real world that they will be much more successful than the people who are not good at managing their time.”

“Physical presence stands for the way they look,” explained Stuart. “This goes for the wardrobe, all the way down to grooming.”

Once again, Stuart used athletes as examples. Sophomore gymnast Susan Jackson ? wearing flip flops, a fishnet shirt and makeup ? and junior defensive back Joe Maltempi ? wearing jeans and unshaven? were displayed as being inadequately dressed for an interview.

The futures of these two athletes are not doomed, though. They were asked by Stuart before the event to dress poorly.

In doing so, they were both compared to their teammates, who were dressed appropriately. Sophomore gymnast Yvette Triay donned an elegant black pants suit. Freshman cornerback Orlando Gunn displayed his black suit with pinstripes, along with his black dress shirt, black tie and black leather briefcase.

Stuart then lectured on visual motion, once again pressing the importance of the handshake. However, it is so much more than just a handshake.

“Visual motion is about the way you walk, the confidence you walk with, the way you smile, what you do with your hands, the way you look at somebody and the expressions you give with your face,” said Stuart. “It’s about how you carry yourself.”

He also stressed the value of verbal delivery.

“The number one question out of an interviewer’s mouth is ?Tell me about yourself,’” shared Stuart. “The reason they are asking that is so they can listen to you verbally communicate. They want to see if you can string together comprehensible sentences.”

Stuart demanded that the student-athletes “research, prepare and practice” these three tidbits before each interview. A slight miscue in one could be crucial to whether or not a person will be hired.

“I’ve interviewed thousands of people who have looked great and carried themselves perfectly who can’t communicate,” confessed Stuart. “If I can’t understand you, then I won’t know how great you are.”

“Mr. Stuart was something else,” exclaimed Byrd. “He came here with a lot of energy. You can tell that this means something to him that he is sharing information that can help young people when they get into the workforce.”

“In an e-mail, please use proper grammar,” said Nicole Hidalgo, the director of marketing and communications for Our Lady of the Lake Regional Medical Center.

“Make sure that if you have an answering machine to have a polite answering message,” added Daphne Donaldson, a recruitment manager for East Baton Rouge Schools. “Use one without music,” she later added.

“If you have inappropriate pictures of yourself on MySpace or Facebook, then you are automatically thrown out of consideration where I work,” said Cale Smith, a managing director from the Smith Financial Group.

Each fact was valuable, each piece of advice something that the student-athletes should use throughout their future.

Holding a career symposium for athletes might be viewed as unnecessary, seeing that some of LSU’s finest athletes will go onto make millions of dollars just to play a game. However, that isn’t the option for everyone.

“Most of our athletes don’t have the option to go professional in their sport,” said Jade Jenkins, the Assistant Director for the Shaquille O’Neal CHAMPS/Life Skills Program. Her statement is true, and is something the NCAA has been trying to push towards student-athletes and their parents for years with their slogan, “There are over 380,000 student athletes, and most of us go pro in something other than sports.”

However, some student-athletes still finish their eligibility and enter the real world without direction. That is something Jenkins and the CHAMPS/Life Skills Program wants to correct.

“We don’t want our athletes to be left hanging when their time here runs out,” stated Jenkins.

As a former gymnast at LSU, Jenkins knows this all too well. Unlike other sports, like men’s and women’s basketball, football and baseball, gymnastics does not have a league for professionals. Luckily for her, she was able to secure a job helping other LSU athletes find success in the future.

“I think that LSU offers some career fairs and different things like that for the students, but nothing is really offered to the student-athletes that fit their time constraints,” explained Jenkins. “We do all of their events at night so that they can still make it to the event after classes and practice and everything else.”

The event has grown exponentially since its inception five years ago.

“The last few years, we had them at the Tiger Den Suites,” said Jenkins. “But we kind of outgrew that this year. We had more panelists volunteer to come. Also, our numbers are rising in terms of attendance.”

After the evening came to a close, Gaudet explained how important the event was to him.

“It taught me a lot about how the interviewing process is ?make or break,’” confessed Gaudet, who could have bypassed the entire collegiate experience when he was drafted by the Tampa Bay Devil Rays right out of high school. “If you know how to answer the questions and be confident, you are pretty much guaranteed the job. I didn’t know how difficult the interview questions could be.”

Byrd felt the event benefited him greatly, as he had talked to Fontenot, Johnson and Peever about joining the pharmaceutical sales field.

“I just got a business card from a field that I’m interested in,” said an excited Byrd. “I could be watching TV at home, but I’m here. A lot of questions were answered that I really wanted to know. I know what to expect from an interview now.”