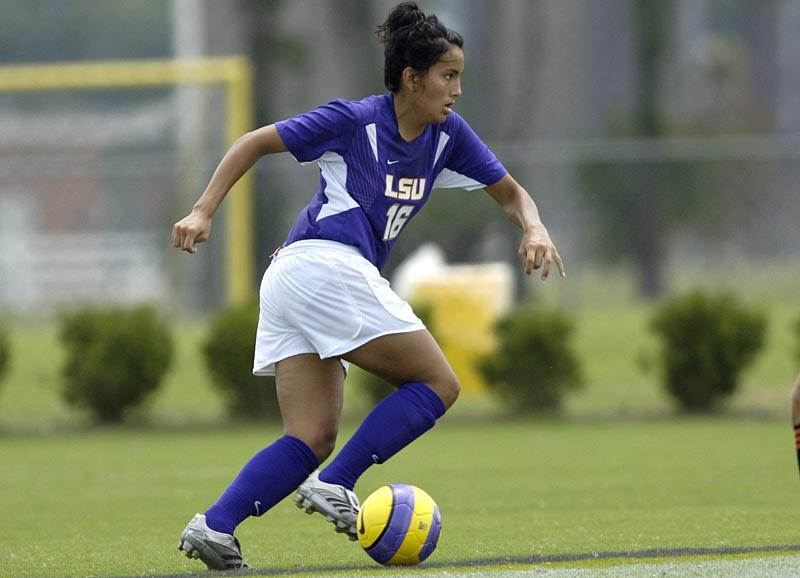 MANDEVILLE, La. — Freshman midfielder Taryne Boudreau fired a free kick into the back of the net late in the first half to lead the LSU soccer team to its first win of the spring season with a 1-0 blanking of Southeastern Louisiana at Pelican Park on Wednesday night.

After sophomore Amanda Carreno was fouled 30 yards out in the middle of the playing field, Boudreau rifled a shot through the Lady Lion defense and into the lower right corner of the net in the 40th minute of play for her first goal of the spring.

LSU held the Lady Lion offense in check throughout the night and freshman goalkeeper Mo Isom earned her third shutout in four spring exhibition matches since joining the squad at the beginning of the semester. Isom has proven to be one of the nation’s top goalkeeper recruits for the Class of 2008 as she has allowed only one goal in 300 minutes of action this spring.

With the win, the Tigers improve to 1-1-2 on the spring after battling North Carolina and Duke to 0-0 draws on Feb. 16 and dropping a 1-0 decision to Texas A&M on March 2.

“Southeastern made it really difficult for us to score goals tonight by the way they competed in the game,” said LSU head coach Brian Lee. “You have to credit Coach (Blake) Hornbuckle for getting his kids ready to play and competing extremely hard for the full 90 minutes.”

Lee said it was also great for seniors-to-be Casey Crawford and Roslyn Jones to have the chance to play in front of their hometown fans for the first time in their careers as LSU Tigers.

“I thought it was only fitting that Casey and Roslyn were two of our better players on the night,” Lee said. “They’ve been great ambassadors not only for LSU, but also for the city of Mandeville with what they’ve accomplished in our program. Those two have made a tremendous impact on LSU Soccer and have earned the right to be our team captains in the fall.

“They are also proof that the Mandeville Soccer Club is among the top club programs in the state. Shane Jeanfreau did a great job of organizing this event tonight and getting close to 1,000 fans to come out and support two great universities. The reception from the fans was tremendous.”

The Tigers return to action next Wednesday as they play host to Northwestern State in a match scheduled for 7 p.m. at the LSU Soccer Complex before wrapping up the spring exhibition season with a trip to Houston, Texas, on April 13 to take on the nationally-ranked Texas Longhorns.