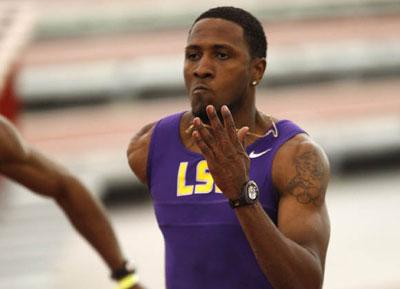 BATON ROUGE — The outdoor season is in full swing and the LSU track and field teams will look to take their performance to the next level this weekend when they make the trip to Austin, Texas, to compete in the 81st Clyde Littlefield Texas Relays at Mike A. Myers Stadium.

The four-day meet kicks off Wednesday with the men’s decathlon and women’s heptathlon, while the Tigers and Lady Tigers will compete for the first time during Thursday’s action.

Sophomore Kim Williams will be the first LSU athlete to compete as she is scheduled to step into the hammer throw circle for the first time on Thursday at 12:30 p.m. CDT. Junior Rabun Fox will follow in the same event at 3:30 p.m.

Junior hurdler Patrick Lee will be the first Tiger to step onto the track at this year’s meet as he is slated to line up in the preliminary round of the men’s 400-meter hurdles beginning at 5 p.m. The Tigers and Lady Tigers will also run their top 4×800-meter relay teams during Thursday’s action.

“This is a meet we always look forward to because it’s the first chance we get to line up against many of the top teams in the country during the outdoor season,” said LSU head coach Dennis Shaver. “It’s also exciting for our athletes to have the opportunity to compete in front of crowds of more than 20,000. It’s just a first-class meet all the way around.”

The relays are among the most exciting events in all of track and field, and the Tigers and Lady Tigers will be tested against the nation’s best in the 4×100 and 4×400-meter relays this weekend.

The Tigers’ 4×100-meter relay team of Armanti Hayes, Richard Thompson, Gabriel Mvumvure and Trindon Holliday hopes to get the stick around the track for the first time this season after being disqualified by a false start at the LSU Tiger Relays this past weekend. The quartet will line up against the likes of Florida State and Texas A&M in Friday’s preliminary round.

The Lady Tigers are among the favorites in the sprint relay on the women’s side as they will field a team of Jessica Ohanaja, Samantha Henry, Juanita Broaddus and Kelly Baptiste, which enters the meet with the second-fastest time in the nation this season at 43.62 seconds.

LSU also features the nation’s top-ranked 4×400-meter relays on both the men’s and women’s sides as the Tigers enter the meet with an NCAA leading time of 3 minutes, 6.11 seconds and the Lady Tigers boast a top time of 3:30.83. The prelims of the event are also scheduled for Friday.

The squads are also scheduled to compete in such events as the 4×200, sprint medley and distance medley relays over the course of the four-day meet.

“I’m very excited about seeing our 4×100 and 4×400 relays line up in this kind of environment and try to get something done,” Shaver said. “The sprint relay is always exciting at this meet, and both 4×400 relays will be a preview of what we’ll see at the NCAA meet later this summer. Our athletes are anxious to get out there and see what they can do against the best.”

The relay events will not be the only featured attraction for LSU this weekend as Baptiste, Henry, Holliday and Thompson are set to make their season debuts in the 100-meter dash.

“This weekend will give some of our athletes the chance to open up for the first time in a really competitive environment,” Shaver said. “These are some of the more competitive 100-meter races we’ll see in the regular season, and we look forward to what they can do their first time out.”

“This is a meet we look forward to each year and is one where we’ve had great success in the past,” Shaver said. “It always gives us a look at what we will see at the NCAA meet, and I’m sure it will attract some great competition again this year. It’s going to be fun for all of us.”

Following their trip to the Texas Relays, the Tigers and Lady Tigers will return home for back-to-back meets as they play host to the Tiger Invitational on April 12 and the LSU Alumni Gold on April 19 at the Bernie Moore Track Stadium. They will then head to Philadelphia, Pa., to compete in the prestigious 114th Penn Relays at Franklin Field from April 24-26.