Follow the Hat: Miles Celebrates Title Near and Far 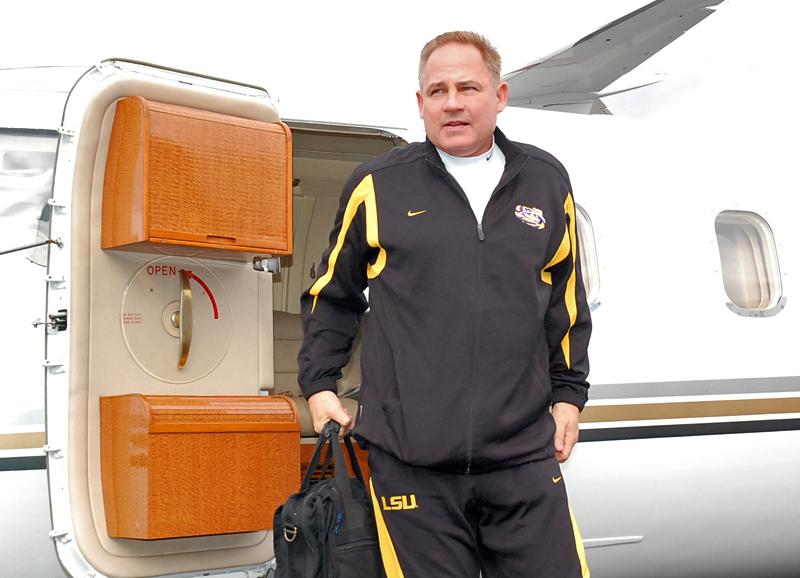 The clock struck zero in the New Orleans Superdome and LSU Coach Les Miles‘ life had changed forever. His status in LSU history was cemented with the Tigers 38-24 victory over the Ohio State Buckeyes in the BCS National Championship.

After 27 years of coaching, Miles had finally reached the pinnacle of his collegiate coaching career. The leader of the purple and gold spent the first 72 hours after the win traveling from Bourbon Street to California to celebrate his “damn strong” team’s position on top of the college football world.

Post-Game Celebration: From GameDay to the French Quarter

After Miles finished his post-game speech and press conference, he spent a few moments with his family and shared a glass of champagne with his wife Kathy. Then, the happy couple left the Superdome and walked across the street to the ESPN GameDay set. Miles did a radio interview on his cell phone while he crossed the street. The Miles pair walked up a set of stairs to the GameDay set, which was constructed six stories up to have the Superdome as its background. The first person to greet him was ESPN analyst Desmond Howard.

“There is the man with the crystal ball,” Howard joyfully yelled as the two Michigan alums embraced.

Miles took his seat on the set as the producers miked him for the show. A group of fans down below had noticed their faithful coach on the set and started yelling up at him saying things such as “You are a savior Les!” and “The Hat is No. 1!”

One fan poked fun at ESPN analyst Lee Corso’s prediction in their pregame show that Ohio State would win the game.

“Tell him you were wrong Lee! Come on – tell him,” The fan joking yelled up at the stage.

Corso obliged, telling Miles that he had made him look “dumb” for picking the Buckeyes. Miles entertained the GameDay crew on air for about five minutes and then made his way down the stairs to head back to the Superdome. Fans started to approach Miles for a picture, an autograph or just to say thanks for what he had done for LSU and the pride he helped bestow on the state of Louisiana.

When Miles had approached the entrance of the Superdome, it was almost as if it had finally hit him what his team had just accomplished.

With Kathy by his side, the national champion coach raised his hand towards the Superdome and shouted “How about that one – Wahoo!”

It would be one of many spur-of-the-moment “Wahoos” for the newly crowned BCS king.

With a police escort leading the way, Les, Kathy and some members of staff made their way through the French Quarter by two white police vans.

While driving to the scene, Miles turned to his wife and said “We are the first two-loss team to win the national championship.”

“But you are undefeated in regulation babe,” Kathy joking replied, referring to her husband’s description of his team following the Arkansas loss.

To say the scene driving down Bourbon was wild would be an understatement. Once it was understood who was in the lead vehicle, hundreds of fans rushed towards the two vans and began tapping the sides of them and cheering at the top of their lungs in support of their coach.

Once they reached the hotel, police on horseback cleared a path for the Miles brigade to make its way to the second-floor balcony.

Les and Kathy stood on the corner of the balcony with an LSU banner hanging below them and waved to the hundreds of fans that were looking up at them.

The fans stared up in disbelief, shocked to see that the LSU coach had joined their celebration. Miles knew exactly what his faithful needed to get them out of their astonished state. He turned to his entourage and Vincent handed him a replica crystal ball of the BCS Coaches Trophy. With the LSU Fight Song blaring in the background, Miles hoisted the crystal ball over the balcony causing the hundreds of fans compacted in the Bourbon Street-Bienville Avenue intersection to erupt.

“This is for you!” Miles shouted towards the delirious fans.

Miles stood with the crystal ball for about 10 minutes before calling it a night and heading back to the team hotel.

After only a few hours of sleep, Miles awakened to his phone ringing ? it was a private number. He reluctantly answered it.

“Is this Les Miles?” a woman on the other line said.

“Yes, this is he,” Miles responded.

“Please hold for the President of the United States,” the woman firmly stated.

President George W. Bush congratulated the LSU coach on winning the national championship, saying his team had “overcome many hurdles” and invited him and his team to visit the White House.

Miles got dressed and headed to a press conference where he would be presented four national championship trophies from the Associated Press, Football Writers Association, National Football Foundation and of course the BCS.

When Miles arrived at the press conference, he spotted The Times-Picayune beat writer James Varney, an Ohio State alum, walking towards him.

“Can you forgive me?” Miles told his distraught beat writer.

“I feel a part of our friendship will never be the same,” Varney said with a smile. “No but you guys deserved it. You have a great team.”

Once Miles finished the press conference he hopped on the team bus out of New Orleans up I-10 and across Lake Pontchartrain bound to the Tigers’ home city of Baton Rouge.

The next day, Miles, Kathy and three members of his staff flew to California where coach was set to attend the American Football Coaches Association Convention in Anaheim and make an appearance on the “Best Damn Sports Show Period” in Los Angeles.

Miles and LSU equipment manger Greg Stringfellow discussed how the team’s championship rings would look on the flight over. When he wasn’t discussing rings, coach spent time reading the paper, talking to his wife and listening to his I-Pod Touch while trying to get some much needed rest.

Miles entered the Convention to someone playing the Tiger Fight song on a cell phone.

“That is what I am talking about,” Miles told the West Coast LSU fan.

Miles mingled with a few of the coaches gathered in the lobby and stood for a photo-op with all of the division champions before heading to the convention’s banquet.

Miles spoke at the banquet saying he was honored by the opportunity and that college football was the “finest sport in the land.”

The LSU coach, never one to boast about himself, talked about his college days where he was “an average lineman” and that Michigan “made a mistake trying to recruit me.”

After the banquet, Miles made his way to the door but he noticed one more coach he wanted to acknowledge before heading out. Ohio State coach Jim Tressel was standing by the exit When Miles cut from his path to approach his counterpart in the BCS Championship. The two shook hands and congratulated each other on their team’s success.

Miles left the convention to head to Los Angeles for the “Best Damn Sports Show Period.” The leader of the purple and gold sat on set with the shows’s crew of Chris Rose, John Salley and Kevin Frazier. Miles loved the fun atmosphere of the show and even suggested a different approach to a skit the show wanted to run. Right before the taping of the skit, Miles asked for one of his staff members to be in it.

Miles grabbed his staff member and untied his LSU tie saying “Come on, if you are going to do this loosen up and have fun with it.”

After the show, Miles took his wife and staff to dinner at Lawry’s The Prime Rib. It was a favorite of Miles as he went there for the Rose Bowl twice as a player.

When their server walked up to the table, Miles looked caught by surprise.

“Excuse me miss, how long have you worked here?” Miles asked.

“That’s it ? I knew I remembered that name,” Miles explained. Miles told her that she had served him when he came here as a player.

Miss. Featherson didn’t recognize Miles or have any idea who he was, just 48 hours after he had won the BCS National Championship. She treated him like any other customer and even talked to him about how excited she was that she was going to get to serve soccer star David Beckham next week.

The Miles crew enjoyed a wonderful full course dinner and as they were leaving Miss Featherson stopped a member of his staff.

“Thanks for coming and congrats to coach,” Miss Fetherson commented. “LSU must have a splendid team.”

It was fitting end to Miles’ celebration tour. Miss Featherson didn’t remember Miles’ name but she recognized he was the coach of the National Champions, none other but the LSU Tigers. For Miles, he wouldn’t ask for anything more or less.