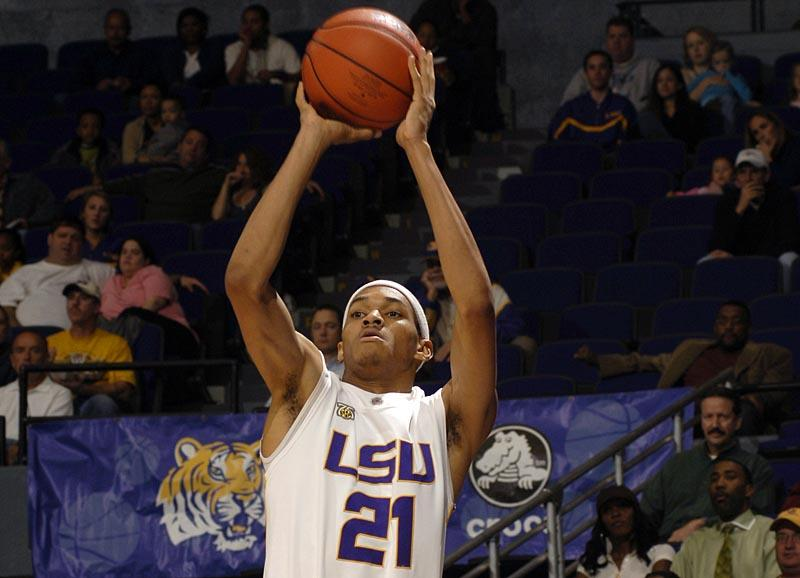 The win, the Tigers 66th consecutive win against a Louisiana school in the Maravich Center, upped LSU’s record to 5-2 on the season heading into a Thursday game in Philadelphia against Villanova in the Pizza Hut Big East/SEC Challenge.

Randolph had a double double and a career high in points with 24 (11 rebounds, five blocks) while Thornton had 22 and Johnson 20. The last time three LSU players were over 20 points in a game was Jan. 15, 2005 when LSU defeated Ohio State in the Maravich Center in double overtime, 113-101. Darrel Mitchell had 32 points, Brandon Bass 29 and Antonio Hudson 20.

Southern was led by the 14 points of Barry Honore’.

“First of all, our team got a little better,” said LSU Coach John Brady. “I know coach Spivery probably isn’t happy with the way his team shot the ball, but hopefully we had a little bit to do with that. I just think from over overall view, our team is getting a little bit better. We still need to block the board a little better. We need to rebound better. At times, we need to come up with some loose balls. We’ve revamped the offense. Without Tasmin (Mitchell, ankle surgery on Thursday), we had to revamp it. We are getting a better feel for what we are doing offensively. I think we are figuring out who can score for us.”

The Jaguars (1-4) briefly closed it to eight on two free throws 38 seconds into the second half but LSU went on a 14-4 run that upped the lead to 20 points five minutes deep and had its biggest lead of the night at the final margin with walk-on Greg Terrebonne hit a three-pointer at the buzzer for his first career LSU points.

Junior guard Terry Martin was the fourth player in double figures for LSU with 11.

“We still need to block the board a little bit better. We need to rebound better. At times, we need to come up with some loose balls. We have a tendency to not secure the ball when it is bounced on the floor.”

“We could clean up our transition defense a little. We were terrible in Maui. We’ve gotten a little bit better since we’ve gotten back.”

“We’ve revamped the offense. Without Tasmin (Mitchell), we had to revamp it. We are getting a better feel for what we are doing offensively. I think we are figuring out who can score for us and who can’t.”

“We just got a little bit better. Certainly, it was good to be able to win that game. We are going to take off tomorrow, and we’ll practice Sunday, Monday and Tuesday. We’ll have three really good practices before we go play Villanova.”

“I told the team tonight that somewhere along the line, we need to beat a team that has made a name for itself. We had a couple of opportunities in Maui, but we couldn’t do it. Now we have Villanova on the horizon, and we have Oregon State and Washington coming here. Then we go on the road to play Texas A&M. Somewhere along the way, we have to figure out how to beat those types of schools.”

“Our ability to block shots from time to time is something exciting. I thought we were beat some of the times tonight, but then I would see a skinny arm from one of our players block a shot. We just need to rebound better, get back on defense better and place an emphasis on execution. Overall, I think we have gotten better the past few times out.”

Opening Statement
“We are struggling on offense. Until we come together we will continue to struggle. LSU is a good team and they have great players. I think success is ahead for them. Tonight we did not prepare mentally like we have talked about. You have to give LSU credit for that too.”

On the large margin…
“It was a combination; we have not shot the ball well in the last three of four games. I was disappointed that we let LSU shoot as well as they did. Going into each ball game you want your opponent to shoot 41 percent or less. Tonight LSU shot 64 percent.”

On being one of the better teams he has coached…
“This is just my second time playing LSU. To say that this team is better than the team that went to the Final Four is too early to say. I think you have to base the success on the team on how they perform. Are they better or not better than the other team, not by the score or the margin.”