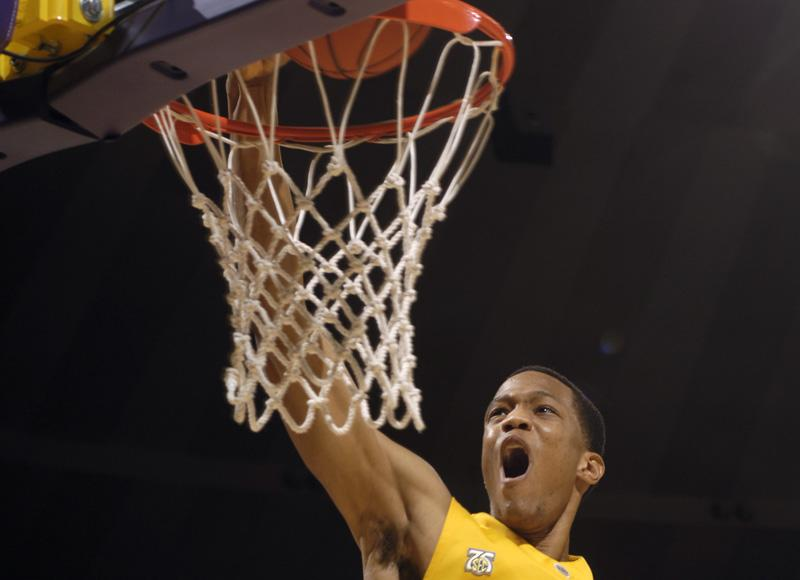 BATON ROUGE — The LSU Tigers held Nicholls State to the fewest points the Tigers had surrendered since the 2002 season opener as LSU ran its home win streak against Louisiana schools to 65 consecutive games Wednesday night with a 68-41 win over Nicholls State University.

The Tigers will turn right around and play again on Friday night at 7 p.m. against the Southern Jaguars in a game moved from Saturday to Friday to avoid a viewing conflict for LSU fans with the Tigers playing in the SEC football championship in Atlanta in the afternoon, the same time the game was scheduled for.

The last time the Tigers surrendered fewer points was also against Nicholls State in November 2002 when the Tigers won 68-24. But that doesn’t mean LSU (4-2) has solved the problems that have been plaguing the team on defense as LSU still gave up 16 offensive rebounds to the Colonels who shot themselves out of the game early, hitting just 16-of-53 shots, just 5-of-24 from the arc and 4-of-14 from the free throw line.

Marcus Thornton scored 24 points to lead LSU. Thornton, who was 9-of-14 from the field, scored 17 of his points in the second half when the Tigers expanded their 31-19 halftime lead. Thornton made four 3-pointers. Chris Johnson added 16 for LSU and Bo Spencer had 11, including three from 3-point range.

The 41 points were the fewest scored by the Colonels (1-6) in a game this season. Ryan Bathie led Nicholls State with 11 points, while Michael Czepil had 10.

The Tigers took control of the game with a 16-5 run during the middle of the opening half. With the score tied at six, LSU got baskets from Terry Martin and Thornton. Spencer and Garrett Green then scored all but two of the final 12 points in the run. Spencer made a pair of 3-pointers, while Green sank a pair of field goals. Spencer’s second 3-pointer gave the Tigers a 22-11 lead.

Nicholls State cut its deficit to five points, but LSU scored the final seven points of the half to build its 12-point lead. The Colonels pulled within nine points at 36-27 early in the second half but the Tigers went on a 16-3 run to take a 22-point advantage.

“We got a little better on defense but were careless on offense,” said LSU Coach John Brady. “Now we have to be able to be efficient on both ends. I thought we improved defensively and rebounded the ball a little better. We defended them pretty well and that is what we need to do.”

The Tigers on offense when they were able to complete a possession, shot 52.1 percent for the game and 7-of-20 from the arc, but 21 turnovers were rampant from top to bottom in the 10-player lineup.

“We are learning and are a work in progress,” said Brady. “We know that they are going to double team the ball screen and yet we made some careless mistakes. Hopefully through more experience we will get better at that. A couple of times we didn’t execute exactly what we needed to or the way we needed to. We need to clean those things up.”

Opening statement…
“We got a little better on defense but were careless on offense. Now we have to be able to be efficient on both ends. Outside of our 21 turnovers, they were a team that didn’t pressure us that much except on some ball screens. We made some poor decisions on that a little bit.  I thought we improved defensively and rebounded the ball a little bit better. We defended them pretty well and that is what we need to do. Defensively we were better but we need to take care of the ball. I would have liked to have gotten out on the fast break a little bit more. For some reason we weren’t able to get up the floor as quickly as I would have liked. Overall it was a 30-point game.”

“I watched tape on Nicholls and they had the ball only down seven or eight against Florida State and had the ball only down seven or eight against Cal. They played some teams that we need to play more competitively against. We improved defensively and shot the ball pretty well, we just had some careless turnovers that we need to clean up. We are learning and are a work in progress. We know that they are gong to double team the ball screen and yet we made some careless mistakes. Hopefully through more experience we will get better at that. A couple of times we didn’t execute exactly what we needed to or the way we needed to. We need to clean those things up.”

On the play of G Bo Spencer…
Bo Spencer really gives our team a lift. Our team seems a little calmer when he is at the point. I have been really proud of his play.”

On Friday’s night game against Southern…
“We improved tonight and we will carry it over in practice tomorrow. We will see how it goes Friday night against Southern. There is no one on our team that takes our opponents for granted. We are capable at losing at any moment. We just need to keep improving and keep working.”

On how the team played defensively…
“We stepped it up. Coach Brady told us in practice that we needed to start playing good, hard defense. Coach kept putting us through defensive slides, defensive drills, all of that and we finally stepped it up and came out and played good and hard and with intensity.”

On the sequence of four consecutive dunks in the second half…
“It was a momentum booster. Once one dunk went everyone felt like more could come. I talked to Anthony [Randolph] and told him it was his turn to get one. He said ‘I’m about to get one.’ He went and got him another one and we went on a dunking spree.”

On being the taller team…
“It was nice to say that [we were the bigger team]. In Maui, we played a lot of big guys. [Nicholls State] were small which was a good thing. Our big men could learn how to guard quicker guys, but it was nice to have a smaller team this time.”

On how the team can improve…
“We need to eliminate some of the turnovers and get shots at the rim. We played good defense and rebounded so if we eliminate [the turnover] we get more points than we had.”

On the defensive transition from junior college to Division I…
“It’s more fast-paced and up and down. I’m trying to get adjusted; I think I’ll be alright. Playing off-the-ball defense is the hardest transition. In junior college we had to worry about one guy scoring so we only had to play defense on one man.”

On the team’s improved defense…
“In practice, we’ve been working all three hours on defense and rebounding and it really paid off tonight. We stopped them from setting their feet and really being able to shoot. We knew how good of shooters they were and we stopped them from doing that, too.”

“That was some of the worst basketball I have seen in a long, long time. I can’t speak for the guys in the other uniforms, but it was an embarrassing performance by us. We had a lack of toughness on both ends of the floor. We can’t make free throws. We can’t make open shots, and we allow that to affect our abilities to defend. We just really didn’t look interested in playing tonight at times. I thought our defensive plan was solid. We were causing some problems and making it tough for them to score early. We didn’t have the same focus and energy on the offensive end.”

“We talked a little bit about their length and their ability to challenge shots. We had to collapse the lane and kick it out and collapse the lane again. The first assault on the castle wall wasn’t going to knock it down. You had to go in their a number of times. You can see they were going to block some of them, but I thought our efforts were soft. We had traveling violations underneath. We would kick it out, stand and watch. We didn’t have any physicality when we did challenge shot blockers.”