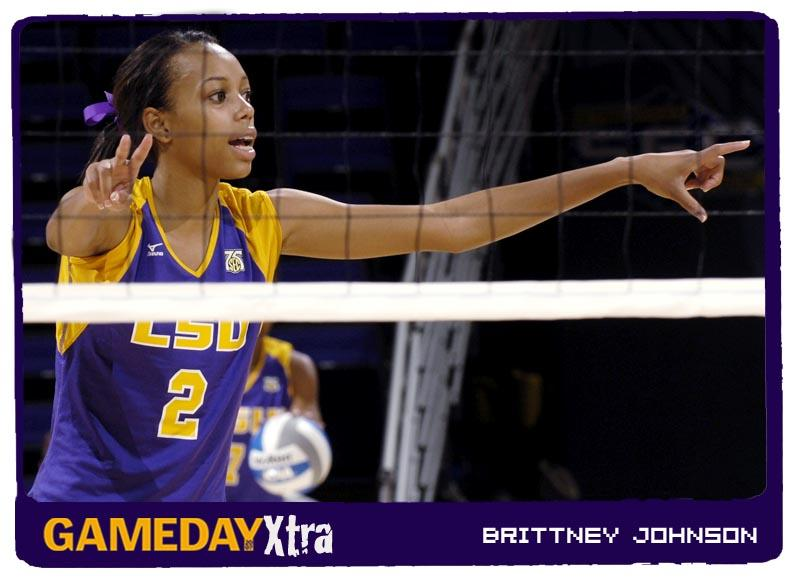 After tough back-to-back losses to Florida and South Carolina in late October, LSU volleyball head coach Fran Flory turned to true freshman setter Brittney Johnson in hopes of steering the team back in the right direction.

Johnson responded in a big way, igniting the offense with great passing down the stretch and helping the team win its third consecutive Southeastern Conference Western Division title.

“I was a little nervous at first,” Johnson said. “When they felt like I was ready, I just went out there and tried to do my best.”

Like most other true freshmen, it took Johnson some time to adjust to the college game. The Baton Rouge native, who attended University High School on the LSU campus, had to make the transition from the hitter position to the setter position. Consequently, Flory chose to be cautious with her freshman setter.

“We brought her along very slowly in the first part of the year because we felt like she needed to gain confidence and be more secure in a setting role,” said Flory of her talented freshman. “It’s tough for a freshman to come in and set an offense, especially an offense like we have that’s fast and has a lot of choices.”

While Johnson saw some action in the first half of the season, she wouldn’t become the primary setter until the final eight matches of the season. However, when she did take over, the team ran the table in its final six conference games to capture the SEC Western Division crown.

Like an impact freshman point guard, Johnson served up assist after assist to eventual All-SEC first team selections Kyna Washington and Lauren DeGirolamo and sophomore sensation Brittnee Cooper down the stretch. She recorded 357 assists in the final eight matches, a lofty mark for a true freshman setter.

Then again, Johnson is not your average freshman. The talented athlete starred in both volleyball and basketball in high school and received a multitude of honors in both sports.

Even as Johnson emerges as one of the Tigers key players, the freshman continues to remain humble and keep everything in perspective.

“I have to work in practice,” Johnson said. “It’s never a given that I’m going to start. You have to earn your spot.”

Johnson credits much of her grounded mentality and work ethic to her mother, Bonita, who coached her at University High School and influenced her athletic career. She hopes she can develop the same kind of relationship with Coach Flory.

“Growing up, she helped me a lot,” Johnson said of her mom. “It’s different coming here since she’s been my coach all of my life. My mom has a connection with me that Coach Fran and I are building right now.”

Standing in the Tigers way is No. 14 New Mexico State. The Aggies are a “big, physical team,” according to Flory, and Johnson needs to control the offense and make solid passes for the team to succeed.

Regardless of the way the postseason plays out, Johnson’s career is only beginning at LSU. This exciting freshman is poised to be a star both on and off the court.

In the classroom, Johnson is not only majoring in accounting but taking the prerequisites she needs to get into pharmacy school as well. On the court, her focus and determination to be the best setter she can be will help her rise up the ranks.

“She’s worked really hard and never lost her focus,” Flory said. “I could not be happier with the impact she has had. It’s what we expected, and certainly, her future here is very bright.”