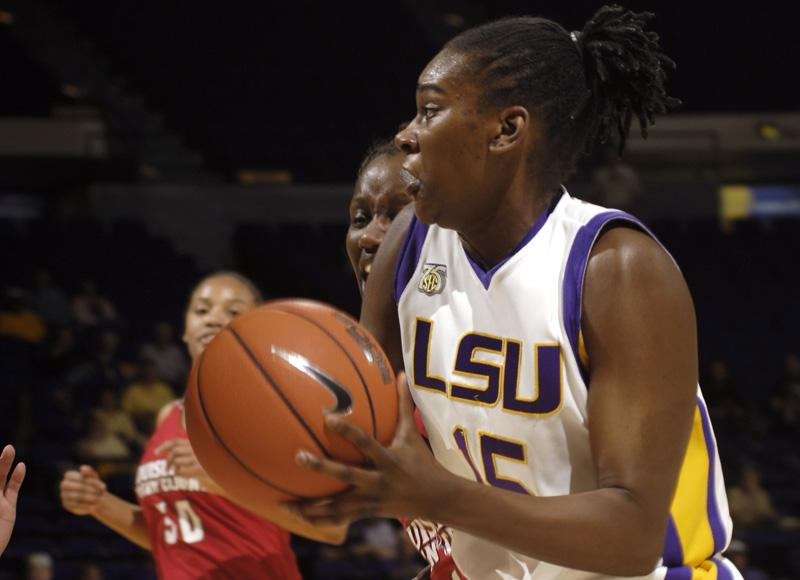 PISCATAWAY, N.J. — Quianna Chaney‘s three-pointer with seconds to play fell off the rim and Allison Hightower could get a shot off after the rebound as the sixth-ranked LSU women’s basketball team fell to No. 7 Rutgers, 45-43, on Sunday afternoon at Louis Brown Arena.

In the previous possession with LSU trailing 44-43, Sylvia Fowles had the ball stripped from her in the paint by Rutgers’ Matee Ajavon. The steal forced LSU (4-2) to foul Rutgers’ (3-1) guard Epiphanny Prince, who made the front end of the one-and-one and missed the second. The Lady Tigers got the rebound after a tie ball leading to the final possession.

“We played well today, but just could not get over the hump,” LSU head coach Van Chancellor said. “I don’t think we could have played a better defensive game, but we just could not find a way to score on the offensive end.”

LSU (4-2) did come back from a second-half eight-point deficit, trailing 38-30 with 12 minutes left in the game. The Lady Tigers scored eight straight points to get back into the game, but could not ever retake the lead.

The Lady Tigers held Rutgers to 38.6 percent shooting from the floor and forced 20 turnovers, but LSU shot just 36.0 percent themselves and committed 19 turnovers.

The Scarlet Knights, which led by as many as seven in the first half, led 26-24 at halftime.

On the defensive end, LaBlanc did hold Ajavon to 2-12 shooting and forced her into four turnovers.

LSU won the battle of the boards, 35-29, including scoring 11 points off of 10 offensive rebounds.

Vaughn led Rutgers with 13 points, while Prince and Ajavon added eight points each.

The Lady Tigers continue its road swing on Thursday when they travel to Houston to take on the Cougars at 7 p.m. CST.