It's GameDay: No. 1 LSU, Arkansas Battle for the Boot 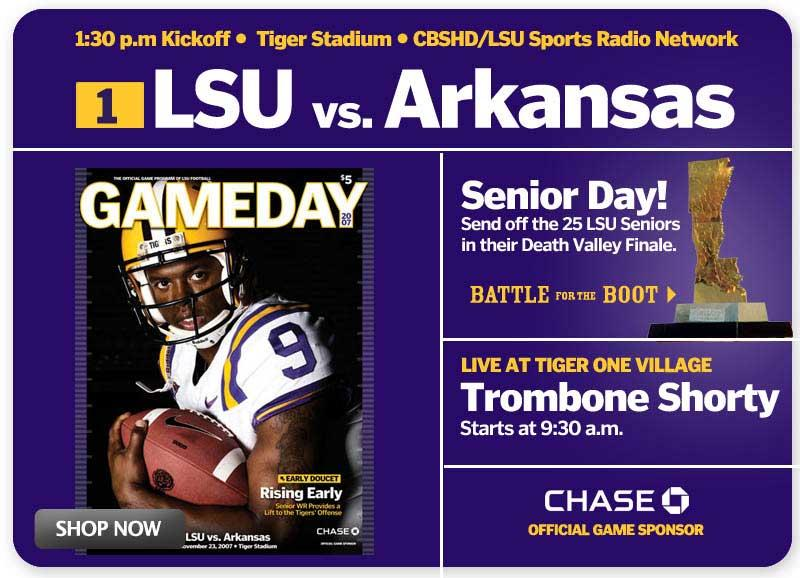 BATON ROUGE ? For LSU’s 25 seniors, Friday’s home finale against Arkansas will be a day filled with emotion.

First, there will be the walk down “Victory Hill” in front of family and friends for one final time. Then, there will be the pre-game salute to the Tiger seniors. Shortly after, the Tigers will take the field in Tiger Stadium one last time, tapping the “win” sign in the locker room and entering under the double-standard goal posts.

But that’s when the emotion will stop, at least until after kickoff, as the Tigers have business to take care of and it starts with facing a high-powered Arkansas team.

“It will be emotional walking down the hill for that last time, seeing family and friends,” LSU running back Jacob Hester said.

Members of the Geaux Zone on LSUsports.net can watch LIVE pregame video (ends at kickoff per SEC regulations) and listen to the entire game audio broadcast starting at 11:30 a.m. CST. Not a member? Join now.

“You can’t get too emotional because you still have a game to play,” Dorsey said. “There will be plenty of time to get emotional once the game is over. Walking down the hill for the final time will be emotional, but once we hit the field, it’s business as usual. We have work to do.”

Indeed the Tigers do as LSU, who goes into the contest with a 10-1 overall mark and a 6-1 league record, are just two victories away from clinching a spot in the BCS National Championship Game. For the second straight week, LSU is the consensus No. 1-ranked team in college football, which includes being the top-ranked team in the BCS Standings.

Standing in LSU’s way is an Arkansas team who seems to have hits its stride in recent weeks, winning four of its last five games, including a 45-31 victory over Mississippi State last week.

“We’ve had a good week of preparation, even though it was a shortened practice week for us,” LSU coach Les Miles said. “Anytime you play an Arkansas team, you have to be ready to play a very physical game on both sides of the football.

“This Arkansas team has a great offense with two of the finest running backs (Darren McFadden and Felix Jones) in the country. They have great special teams. Their defense is nationally ranked and extremely strong on third down. We understand when we kick off or we are on offense or defense that we have to be ready to play. This is not just about showing up, we have something very important to play for. We look forward to it.”

In addition to playing for a berth in the national title game, the Tigers will also be attempting to send their senior class off on a winning note. LSU has won eight straight Senior Day games. Overall, LSU has won a school-record 19 straight home games, a streak that also leads the nation.

This year’ senior class leaves a legacy at LSU that includes being the winningest class in school history with 54 victories since 2003. They have also won more SEC games (32), beaten more top 25 teams (19) and more top 10 teams (9) than any other class in school history. Finally, this year’s senior class has played every game of their career as a ranked opponent, also a first for the Tigers.

“I’m looking forward to leading these seniors back into Tiger Stadium,” Miles said. “I’ve been very fortunate to have been their coach. This is a very special group of men. When they take the field in Tiger Stadium for the final time, there will be a lot of emotion. I look forward to watching their performance on Friday.”

Among the seniors who will play role for the Tigers against the Razorbacks include quarterback Matt Flynn, wide receiver Early Doucet and Hester. Flynn has thrown for 2,024 yards and 14 scores and he’s rushed for another three touchdowns to lead a Tiger offense that is averaging 39 points and close to 450 yards of offense.

Doucet ranks second in the team with 38 catches for 393 yards and four scores. Hester has been LSU’s do-it-all back, leading the Tigers in rushing with 771 yards and eight touchdowns. He’s also caught 12 passes for 101 yards and one score.

Defensively, the Tigers are led by All-American tackle Glenn Dorsey, who is expected to be back at full strength after sitting out part of the fourth quarter last week against Ole Miss. Dorsey has 55 tackles, 11.5 tackles for losses and six sacks for an LSU defense that ranks among the top 10 in the nation in five categories.

Lost in all of the excitement of Friday’s game is the fact that the winner of the contest gains control of “The Boot”, the trophy that is annually awarded to the victor in the LSU-Arkansas contest. LSU has had control of the best for the past four years. Last year, LSU posted a 31-26 win over Arkansas in Little Rock in a game that helped propel the Tigers in the Sugar Bowl.

“Keeping the boot in our control means a great deal,” Miles said. “This game sets up the next two. We are excited about closing out our home season against Arkansas and we are going to do all that we can to send off our seniors the right way.”

After Friday’s game, the Tigers will represent the SEC Western Division in the league’s championship game next Saturday at the Georgia Dome in Atlanta. LSU will face either Tennessee or Georgia in the championship game.