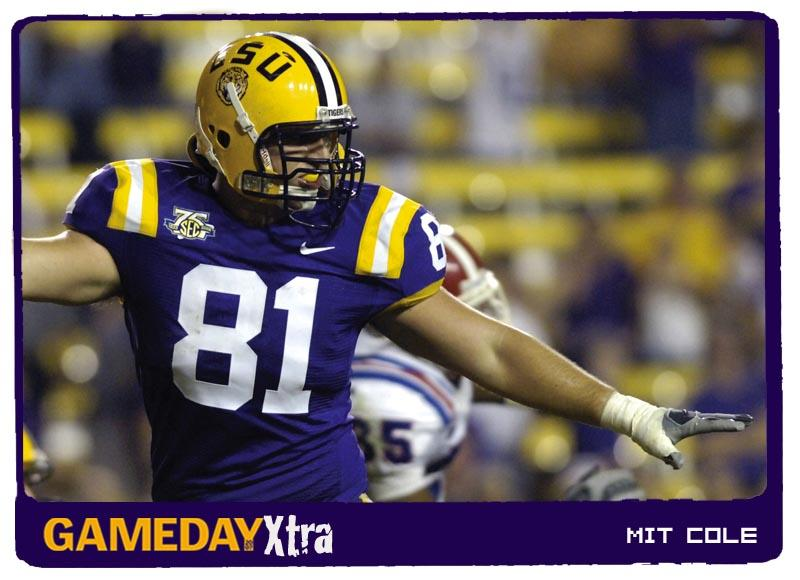 Near the end of LSU’s win over Louisiana Tech two weeks ago, wide receiver Terrance Toliver appeared to catch a touchdown pass, but officials ruled that he had stepped out of bounds at the two-yard-line.

So, without hesitation, offensive coordinator Gary Crowton called a play that would lead to the first touchdown of senior Mit Cole‘s career. With 4:42 left on the clock, quarterback Ryan Perrilloux connected with the tight end for a touchdown that would culminate the last scoring drive in the Tigers’ 58-10 triumph.

“I’d been itching for it all year, and finally they let me have it. I was just glad that I didn’t drop it,” Cole said.

Cole’s work ethic is evident on the field. He is known as a blocking tight end and has worked hard to be the best he can at what he is called upon to do. The calling is for Cole to be an added boost to the front line, blocking linebackers and defensive linemen to open holes for the running backs.

Cole has been more than successful filling that role, as the LSU rushing attack has averaged more than 200 yards per game.

For most seniors, when they walk off the field for the last time, they walk away from football and toward a career in another field. Keeping that in mind, Cole realizes the importance of focusing on academics. The enthusiasm and hard work he exhibits can be seen beyond the gridiron, as Cole is one of the stars of the team in the classroom.

Next month, Mit Cole will graduate from Louisiana State University after only three-and- a-half years at the university. While it has become the norm for many students to take five or more years to graduate, the two-time SEC Academic Honor Roll athlete has been pushing just a little bit harder to finish early.

“My goal was to keep my GPA above a 3.0 because I knew it would set me up for a better future down the road,” said the 6-4 product of Picayune, Miss. “I never really focused on making the SEC Academic Honor Roll, I just wanted to do my best.”

When it comes to Cole’s plans after graduation, it’s all about going back to his roots. After continuing the family tradition of playing college football ? his father played at Ole Miss ? Cole is also stepping into another pair of his father’s shoes as a banker.

“I was really excited last December when I found out that if I picked up a few more hours, I could graduate early,” Cole explained “It’s been hard, but it has been worth it because the position I got with BanCorp South wouldn’t have been available if I didn’t graduate in December.

“My dad instilled in me early on that it doesn’t matter how big people are, it’s the people that work the hardest that make things happen.”

And make things happen Cole has. The competitive spirit his father has instilled in him has carried him through the years on the gridiron and will carry him far into the future.