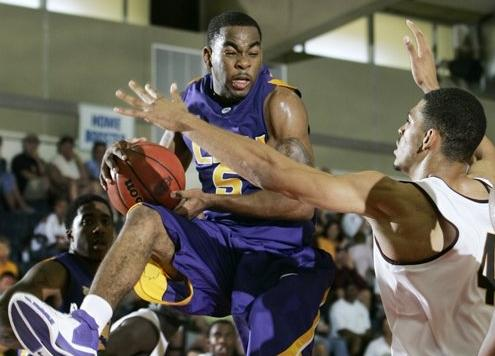 LAHAINA, Hawaii — The LSU Tigers forced overtime with a three-pointer late in regulation, but couldn’t stop Arizona State made 5-of-6 free throws in overtime to spell the difference in the Sun Devils’ 87-84 win over LSU in the fifth place game Wednesday in the EA Sports Maui Invitational.

The Tigers (3-2) were scheduled to return to Baton Rouge Thursday night and will next play on Wednesday, Nov 28, at 7 p.m. at the Maravich Center against Nicholls State University.

LSU had battled from behind much of the game, taking brief leads only to see the Wildcats to come back and take the lead. With the game tied in regulation at 75-75 and 43 seconds to play, James Harden scored on a layup to make it 77-75 for Arizona State. Bo Spencer of LSU missed a three-pointer with eight seconds to play and Alex Farrer was forced to foul Jeff Pendergraph with six seconds left.

Pendergraph made one free throw to make it 78-75 and Arizona State called time out to set up its defense.

LSU threw the ball to mid-court and took its final time out with four seconds left.  The inbounds from half court went to Marcus Thornton in the right corner of the court in front of the LSU bench. Thornton launched a high arching shot that hit nothing but net with 2.5 second to play. On the ensuing inbounds, Thornton stole the pass at mid-court from Arizona State, but was standing on the sideline as he shot a 45-footer that hit the back of the rim as the horn sounded. The referees ruled the ball was dead when he caught it and put 0.5 back on the clock, but Arizona State could do nothing with it sending the game to overtime.

“We were sitting over there discussing what we wanted to do,” said LSU Coach John Brady. “Instead of running a bunch of screens and spread the court, John Treloar said why don’t we start Marcus up the ball, flared to the corner, throw it over the top and see if he can make one. That’s what we did. He had enough room to turn and shoot it. Marcus Thornton is an excellent shooter. He’s missed better shots today than the one he made. He’s made tougher shots than he made open shots today. He’s going to be fine with that.”

In the extra session, neither team scored on the first four combined possessions before Pendergraph rebounded a Harden miss and dunked the ball to give ASU an 80-78 lead they would never give up. After Anthony Randolph missed a three-pointer, Harden came down and drove for a dunk to give the Sun Devils an 82-78 advantage with 2:50 to play.

A free throw with 1:29 left made it 83-80, ASU. LSU turned the ball over with 1:17 left and after a missed three-pointer by ASU, Randolph was fouled on the rebound and made one free throw with 55 seconds left. ASU ran the shot clock to nine before Bo Spencer fouled and Derek Glasser made both free throws for an 85-81 advantage. Thornton would make a three pointed but two free throws with six seconds left put LSU down three with six seconds to play.

LSU came down and tried to get off a tying shot, but a forced effort at the buzzer was not close.

Randolph led LUS with 21 points, while Thornton had his first double-double with 18 points and 12 rebounds. Spencer had 14 and Temple 11 points and seven assists. Pendergraph led Arizona State (2-1) with 25 points and 10 boards, while Harden had 23 and Christian Polk 11.

But the thing Coach John Brady knew when he spoke to the media was that it was only the third time in 11 years that LSU had scored 80 or more points and not been able to come away the victor.

“I told our team that until everyone on this team to a man gets better defensively, respects guarding the ball, rebounds the ball without giving teams second shots, we have no shot. Eighty-four points for my team is enough. Plenty. But you look at our scores and we’ve lost three games scoring 80 or more points. We just need to defend the ball better. We need to have more respect for defending well without fouling. Until we get to that level, we are going to have these types of situations where Oklahoma State is a wire, this game is a wire. We played Southeastern and McNeese and give up 70. Therein lies my basketball team. It has nothing else to do with anything that is going on except our inability to make consecutive stops without fouling and finishing the possession by rebounding the ball. That’s it,” said Brady.

“That’s going to be our focus when we get back home. We’ve got enough guys who manufacture a few shots, make some free throws, do those kinds of things. We got destroyed around the goal the first six or eight minutes. We’ve got to get better collectively defensively.”

The Tigers finish with a 1-2 record for the third time in their three trips to Maui.