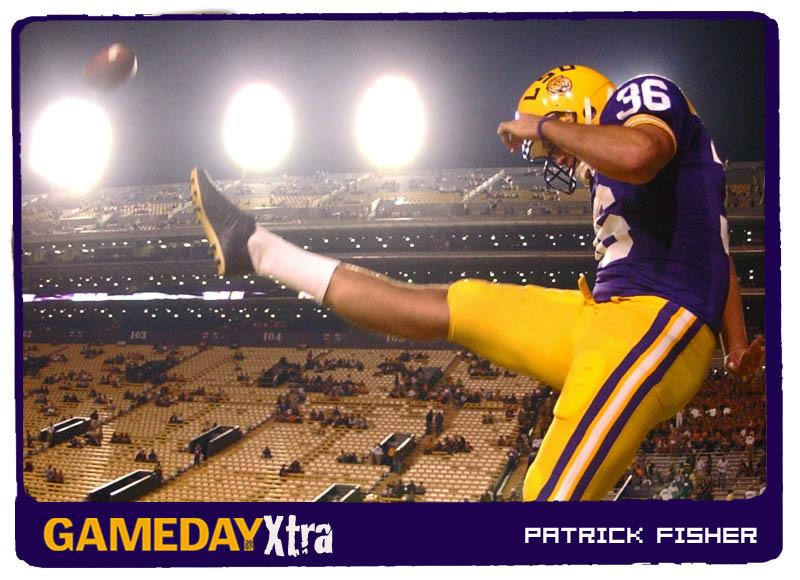 After playing behind one of LSU’s best all-around athletes for four years, Patrick Fisher finally gets his time to shine as all eyes have been on the senior punter this season.

Fisher began the 2004 season as the starting punter, but he was replaced by Chris Jackson ? who was also a member of LSU’s baseball team —  after two weeks. Jackson kept the job through 2006 before signing a free-agent deal with the Buffalo Bills.

“It was difficult. I’m a competitor and I wanted to be out there and play,” Fisher said. “At the same time I knew it was the coach’s decision. Playing behind Chris made me work harder. It pushed me to be better.”

Fisher waited patiently for his time and now he has solidified the starting position. The moment that Fisher dreamed about while playing punt, pass and kick as a child back home in Hyattsville, Md. is no longer only wishful thinking.

“I wouldn’t have changed it for the world,” Fisher said. “I don’t know if things would have worked out this way or not. I just kept at it and never gave up.”

A football player with a 6-foot-5, 240-pound frame usually finds himself at linebacker or defensive end, but as a punter, Fisher is in a class all his own. While special teams sometimes go unnoticed, Fisher’s size has always gained attention from fans and coaches.

“Growing up I was told by coaches I was too big to be a punter,” Fisher explained.

Fisher developed into one of the nation’s elite punters during his high school career, and when LSU offered him a scholarship, he readily accepted.

“I felt at home here and really liked what the university stood for,” said Fisher, a public relations major with aspirations to work for ESPN. “LSU had such a great program of academics, facilities and coaches. I wanted to play in the best environment available and LSU provided that.”

Despite his extraordinary size as a punter, Fisher’s work often goes unnoticed. Most football fanatics get revved up by a long pass into the end zone or the ferocious hit by the defense. However, not many people realize how important a fair catch on a punt can be.

They don’t see the difficulties of catching a long snap and getting the kick off in 2.0 seconds or less before a possible block.

Fisher takes his role seriously as one of the leaders of the Tigers’ special teams, and through the first 10 games of this season, he led the SEC in punting with an average of 44.3 yards per kick.

“This is what I came to LSU for, to be the starting punter,” he said. “I want to be the best punter in the nation.  I won’t stop at anything short of that.”