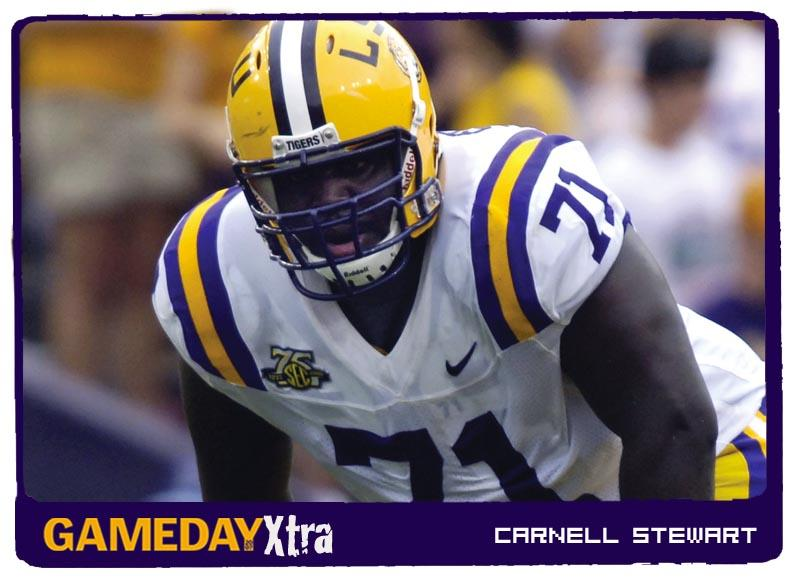 In early 2003 one high school senior in River Ridge, La., had a major decision to make. Carnell Stewart, a standout defensive lineman at traditional powerhouse John Curtis Christian School, had to choose which university he would be attending for the next four to five years.

At first Stewart committed to play at USC because he and his teammate at John Curtis, Ryan Watson, both had family out in California and believed it would be good to discover a new scene and get away from home. Although Watson signed with USC, the situation at home changed for Stewart ? a change that would alter his decision.

“My mom told me she was pregnant with twins, and my stepfather was driving trucks at the time and was always on the road,” Stewart said. “I said to myself it isn’t right for me to leave my mom when she has nobody there to help her.”

Stewart chose to stay closer to home and family, so he signed with LSU. Since Stewart arrived on campus the journey has not been easy. There have been many trials and frustrations that Stewart has had to face, but he has risen to meet every one that comes his way.

As LSU prepared for the Peach Bowl against Miami during the 2005 season, head coach Les Miles approached the 6-foot-5 lineman about possibly switching to the offensive side of the ball.

“Coach Miles said, ?We could use some depth on offense, and if you don’t like it you can stay on defense.’ ”

Stewart agreed to the switch before the start of the ’06 spring practice.

“I liked it during the spring, so when I stayed on offense (former offensive line) coach Stacy Searels taught me everything I needed to know, as far as offensive line techniques, and everything has worked out from there.”

Before Stewart could get to the position he is at today as the starting right tackle, he had to face another test of his determination to play.

Stewart had suffered a serious knee injury in high school, and it started to become a debilitating problem by his fourth college season.

After Stewart’s first season as an offensive lineman in 2006, he had surgery to repair his right knee.

“I was out for about a month or so. I rehabbed every single day, almost two or three times a day, so I got back real fast,” Stewart said.

Because of his hard work, Stewart earned the right to start at right tackle after four years of playing the backup role. He has helped lead an LSU rushing attack that has averaged over 200 yards a game.

One might wonder what motivated the big man to be patient and stick it out even though he faced many obstacles and seemed lost in obscurity. What motivates Stewart to give all he’s got every day on the practice field are the same people who influenced his decision to come to LSU ? his five-year-old twin siblings.

“That’s really what has pushed me ? my little brother and sister ? knowing I have to make it to help my family out,” Stewart said. “I’m really doing this for them.”