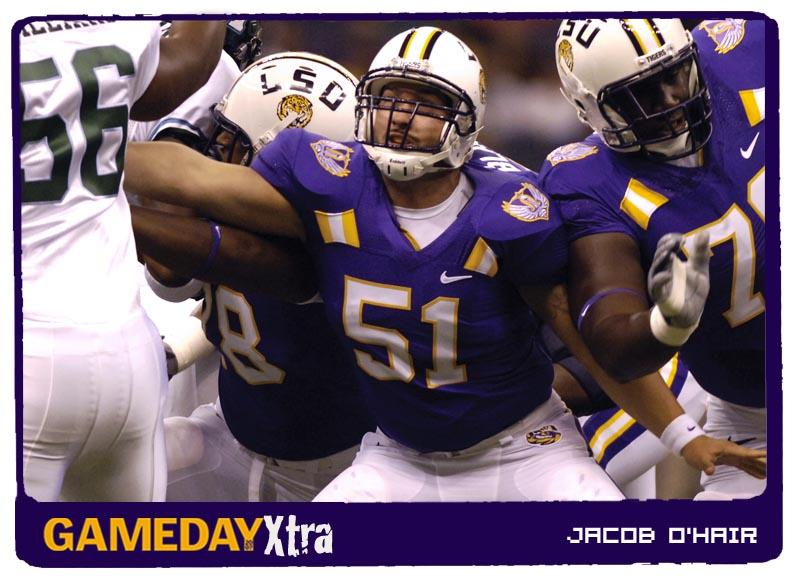 When Jacob O’Hair took the field at acclaimed kicking coach Chris Sailer’s National Snapping Combine in May 2006, he just wanted the opportunity to showcase his skills in front of the Bowl Championship Subdivision (Division I) coaches attending the Las Vegas competition.

The California native served as the deep snapper for Mt. San Antonio Junior College in Walnut, Calif., but hadn’t caught the attention of higher level recruiters, in large part because of the nature of the deep snapping position. Sailer’s combine, however, gave O’Hair the chance to gain national exposure, and he took advantage of it.

LSU special teams coordinator Bradley Dale Peveto was one of the coaches in attendance and came away impressed with the junior college prospect. By the end of the competition, O’Hair had parlayed his performance into scholarship offers from LSU and Texas A&M.

It didn’t take long for the future transfer to make a decision on his final two years of eligibility. He visited LSU three weeks after the combine and committed to the Tigers over the Aggies in early June.

“The facilities out here and the fan support impressed me a lot along with the school itself,” O’Hair said.

Because of his status as a junior college transfer, O’Hair counted as a member of the 2006 recruiting class. The Tigers, in need of a dependable deep snapper, turned to their new transfer right away.

O’Hair became one of the first players from his class to see the field in the 2006 season opener against UL-Lafayette. He recalls his first moments playing in the electric atmosphere of Tiger Stadium.

“Going from playing in front of 10,000 people to 92,000 was pretty nerve-racking at first, but I was definitely more excited than anything else,” O’Hair said.

As a deep snapper, O’Hair’s contributions are often overlooked. However, this senior is one of the Tigers’ most consistent players, delivering flawless snaps on almost every occasion and making key blocks in the trenches. Senior punter Patrick Fisher gives his deep snapper much praise for the stability he has given the special teams units.

“He’s such a hard worker,” Fisher said. “He’s focused and dedicated. You couldn’t really ask for anything more out of a deep snapper. He is able to snap, block and cover, and he is one of the best I’ve ever been around.”