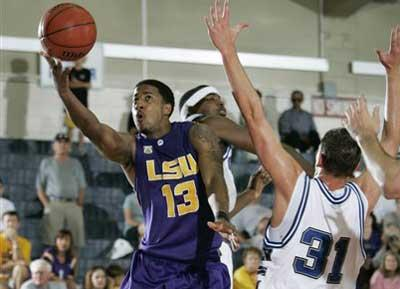 BATON ROUGE — LSU overcame its fourth consecutive game of first-half struggles to put its game together in the second half to win over host Chaminade, 78-72, Tuesday morning Hawaii time at the EA Sports Maui Invitational.

The Tigers, 3-1, will meet Arizona State, a 62-41 winner over Princeton in the other consolation semifinal, in the fifth place game Wednesday at 9 a.m. HST (1 p.m. CST). The game will be televised by ESPN2 and the radio broadcast will be available on the LSU Sports Radio Network, in the GeauxZone at LSUsports.net and on the SEC channels of XM Satellite Radio.

In four games this season, LSU has been tied at the half at home with Southeastern Louisiana and McNeese State and trailing by 18 against Oklahoma State Monday and by a 41-36 score here Tuesday. LSU has outscored the opposition in all four second 20 minutes and had a shot in the air to tie the Oklahoma State game on Monday in the final minute before falling by six in the opening round.

It was Chris Johnson, coming off a career high 19 points on Monday, that took charge of the game early for LSU, scoring 11 first half points on the way to an 18-point, 11 rebound game that marked his first career double-double.

But it was LSU’s inability to stop the Chaminade three-point shooting in the first half as they hit 8-of-16 in the first half that gave the Silverswords, looking for their fifth win in the history of the tournament, a five-point halftime advantage that had the Tigers coaching staff unhappy as they headed to the dressing room.

The Tigers came out quickly to score the first seven points to take the lead, 43-41 on an Anthony Randolph layup 90 seconds into the half. The lead seesawed back and forth before a Garrett Temple jumper would give LSU the lead for good at 49-47 with 15:02 to play. That started an 18-8 run that would eventually give LSU a 65-55 lead on a Bo Spencer three-pointer with 8:54 to play. The Tigers would against lead by 10, 67-57, about a minute later as well.

The Tigers, out of a time out, missed a three-pointer by Terry Martin, but Chris Johnson got the long rebound and found himself alone with a big surge to the goal for a dunk and a 73-69 advantage with 2:43 left. Chaminade missed a free throw, had a turnover and missed layup, while LSU had a turnover and two missed free throws before LSU got the ball back and Chris Johnson was fouled with 1:17 left.

After making one free throw to give LSU a five-point advantage, Hayden Heiber hit a three-pointer with 35 seconds left to cut the game to 74-72.  Chaminade fouled Randolph with 18 seconds left and the freshman calmly swished both charity tosses to ice the game and Garrett Temple got to the line with eight seconds to make the game the final margin.

“Chaminade is a well-coached team,” said Coach Brady. “They are put together well. They run their stuff. They did the things necessary to win that game. Hayden Heiber is coming down in rhythm and shooting the ball over some people. He had a great game. They played well enough to win the game. I think in the end we made some athletic plays and got out in front of them a little bit and out ran them down the floor and we hit enough free throws to win the game.”

In the second half, LSU had 18 points in the paint and eight to four points off turnover advantage and for the game took advantage of 14 Chaminade turnovers with 20 points compared to 10 off LSU’s 11 points.

Randolph scored 14 second half points to lead LSU with 21 points to go with nine rebounds with Martin getting 13 and Spencer 11. Marcus Thornton, who had scored at least 20 in the first three games, was almost a non-factor in the game with four points on 2-of-12 shooting. Heiber led Chaminade (1-2) with 25 points, including seven-of-10 three-point shooting. Rodrick Johnson had 11 points and 13 rebounds, while Marko Kolaric getting 10 points and 10 boards.

LSU shot 47.1 percent for the game (32-of-68) with 7-of-21 from beyond the arc. The Tigers hurt themselves at the line for the first time this year, making just seven-of-14, but the Tigers had six players combined for 11 blocked shots. Chaminade shot 38.0 percent overall, but outrebounded the Tigers, 45-41.

“We are a work in progress,” Brady said. “Without Tasmin Mitchell on the floor, Garrett Temple is experienced on our team and Terry Martin transferred in from Texas Tech and after that we have a whole new group of guys. Make no mistake. I would rather have a win than a loss talking to you now trying to figure it out. We got better defensively the second half. I think our team can score baskets. Our biggest issue is rebounding the ball and defending as we should because we are inexperienced about some things that only time is going to help our team.

“I said (Monday) that this was a trap game. The only good thing was the time we played (Monday). When you lose, you are where you are by what you do or don’t do. We didn’t win. We had the trap game. We survived it. We won the game. We’ve got to learn from this and be ready to go at 9 a.m. Wednesday.”

“I thought our guys did a great job. We came ready to play,” said Chaminade Coach Matt Mahar. “We out rebounded a team for the second straight game. Those guys down low for LSU were super athletic. They are 11 blocks as a team which is ridiculous. Our guys played great. We’re happy. We’ve got one more day so we are going to forget about this one real quick and get ready for (Wednesday).”