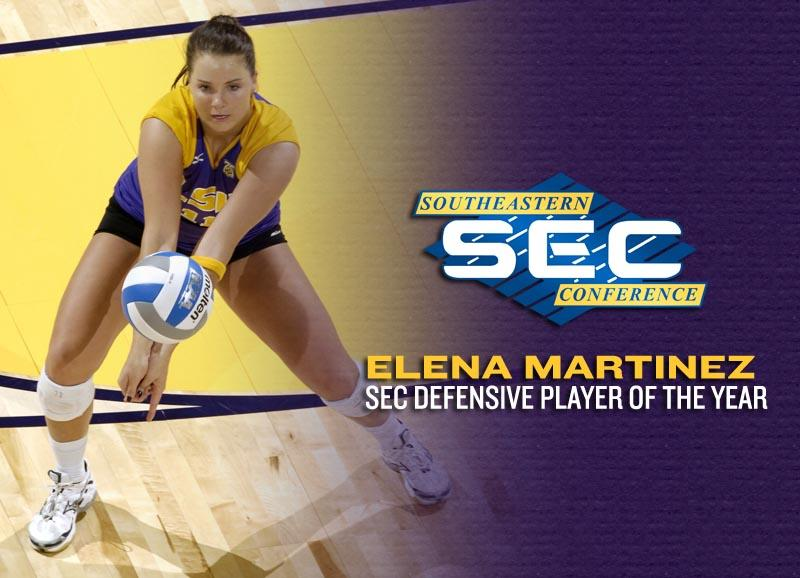 BATON ROUGE — Junior Elena Martinez was named the Southeastern Conference Defensive Player of the Year, while Kyna Washington and Lauren DeGirolamo earned first-team All-SEC honors and Angela Bensend was named to the SEC All-Freshman team, it was announced by the league office on Tuesday.

A two-time SEC Defensive Player of the Week selection, Martinez broke the 21-year-old conference record for digs in a single season and is now just 34 digs away from breaking into the top 20 in single-season digs in NCAA history. Averaging 5.71 digs per game for the year, she leads the league in digs per game and ranks 32nd nationally. Against Alabama, she shattered the LSU single-match record for digs with 43, the most by a player in the conference this season and the only Tiger to ever record 40 digs in a match.

In just her first season as the starting libero, the New Orleans native has recorded double-figure digs in every match this season and posted 20 or more digs in 12 of the LSU’s 20 conference matches. Only the second Tiger to ever record 30 digs in a match, she has done it on five occasions this season, including four in SEC play.

A member of the Iowa Challenge All-Tournament team, she broke the LSU record for digs in a four-game match with 33 against Arkansas and now holds three of the top four marks all-time in four-game matches. Overall, she holds 10 of the top 18 digs marks in school history. This is the first conference honor for Martinez, who beat out the reigning Defensive Player of the Year for the award.

After being named to the SEC All-Freshman team last season, DeGirolamo was the Collegiate Volleyball National Player of the Year on Nov. 13 and the SEC Defensive Player of the Week on Oct. 8 this year. Leading the team and ranked second in the SEC in blocks per game, the sophomore middle blocker is ranked in the top 30 in the nation this season. In addition, she ranks in the top 10 in hitting percentage in the league and is ranked 104th nationally, while ranking second on the team in kills per game.

Against Mississippi State, she recorded 11 blocks, her best blocking match in SEC play, to go along with 20 kills for her only double-double in conference action. The Belleville, Ill., native recorded a career-best 12 blocks against Rice, which tied for the fourth most blocks in a four-game match in LSU history. With 17 kills against the Owls, it was her first double-double of the season.

In 13 of the Tigers’ 20 conference matches, the Most Valuable Player of the Mizuno Tiger Classic and the Mizuno Invitational II recorded double-figure kills, including four 20-kill matches. Also an outstanding student, DeGirolamo was a first-team ESPN the Magazine Academic All-District selection with a 3.91 grade point average in math.

A two-time SEC Player of the Week, Washington leads LSU and ranks fourth in the SEC in kills per game and second in service aces per game. Becoming just the 14th player in LSU history, and only the fifth junior, Washington recorded her 1,000th career kill earlier this season. She now needs only 120 kills to break into the top 10 in career kills in LSU history. In 18 of 20 conference matches, Washington recorded double-figure kills, including four 20-kill matches.

Against Ole Miss, the junior from Houston posted a phenomenal match. Recording the second most kills in a three-game match in LSU history with 24, she also hit .a season-high .378. With 28 kills against Iowa, she set her career high, while recording a league high 26 kills against Tennessee.

Washington also posted a career best with eight blocks against Mississippi State. In 13 of 20 SEC matches, the Iowa Challenge and Mizuno Invitational All-Tournament team selection led the team in kills and leads the team with 13 double-doubles in conference play.

A true freshman, Bensend came in and has started since day one as a Tiger. The SEC Freshman of the Week on Oct. 22, she ranks fifth on the team in kills this season. Playing on both the right side and the outside, the Plano, Texas, native posted double-figure kills in six matches, including three in SEC play.

Bensend also recorded a double-double against Saint Louis and a career-high .556 hitting percentage against Georgia. On seven occasions, she recorded four or more blocks in a match, including a career-high six against both Kentucky and Ole Miss.

The LSU volleyball team swept a pair of matches from Georgia and Auburn last weekend to claim the outright SEC Western Division championship. It marked the third straight division title and the second straight outright championship, finishing one game ahead of Ole Miss in the West. LSU shared the 2005 championship with Arkansas before winning outright last year and this season.

LSU will close out the season against Tulane on Saturday at 7 p.m. The Green Wave finished the regular season in second place in Conference USA and have been receiving votes in the national polls on and off during the year. Fans wearing Hawaiian shirts will receive FREE admission to the match. NCAA Tournament selections will be announced on Sunday, Nov. 25 at 7 p.m. on ESPNU. The Tigers will be looking for their third straight bid to the NCAA Tournament.