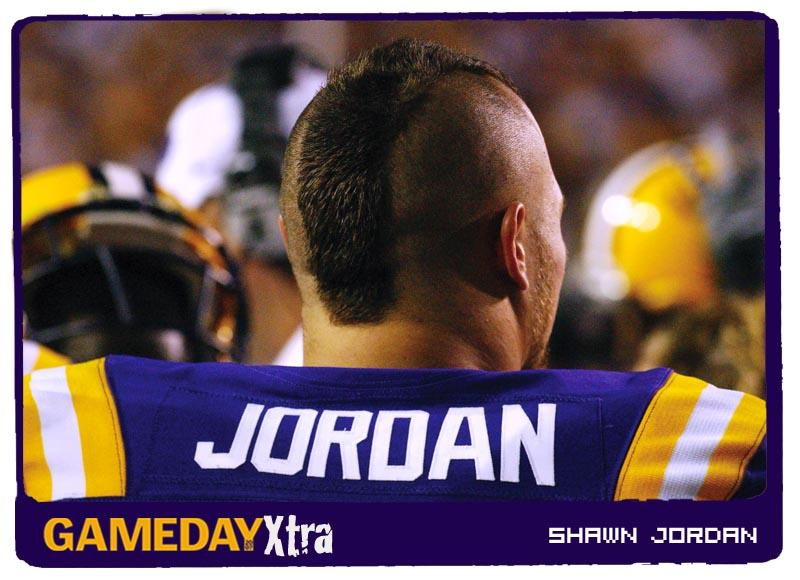 A linebacker has two main jobs.

The first job is to stop running backs that make their way past the defensive line.

The second job is to put pressure on quarterbacks if they sit in the pocket for an extended period of time.

There is usually only one person standing in the way of a linebacker trying to take care of business. When that person can bench press over 600 pounds, those linebackers might want to think twice about getting in his way.

Fortunately for LSU, there is a player on its roster that fits this description to a “T.”

Shawn Jordan, a senior fullback, makes a living out of deterring potential tacklers in an effort to protect his teammates.

“I love hitting people,” explained Jordan. “It’s something I take pride in. It’s all I do as a fullback.”

Jordan came to LSU in 2003 as a nationally-ranked fullback from El Paso, Texas. After redshirting as a true freshman in ’03, he played in only two games in 2004. While some players would let their egos take them out of the game mentally, Jordan decided to capitalize on a talent of his to garner the attention of his coaches.

Jordan was bench pressing over 400 pounds when he was still in high school. Working with LSU strength and conditioning coordinator Tommy Moffitt and his staff, Jordan was able to add muscle to his already massive frame, as well as improve his numbers in the weight room.

“He’s quite a strong young man,” said Moffitt. “I know he has broken three school records, one of which was his own. He broke his own power clean record. He is probably the best lifter we have ever had here, which means a lot because we have had some great lifters here.”

On top of his weightlifting abilities, Moffitt believes Jordan is successful because he eats right and doesn’t stay out late. It’s not like he has time to stay out late, seeing that he is working on his second degree.

“I am thinking about going to med school, and I love chemistry, so I figured I might as well use this opportunity to get another degree,” said Jordan, who graduated earlier this year with a degree in kinesiology.

Before med school though, Jordan has his sights set on an SEC title, as well as a BCS National Championship. He was a part of the 2003 LSU title team, but now he is actually contributing on offense, and he is a star on special teams.

“Playing special teams is fun,” said Jordan. “You know exactly who you are going to hit, then you run down field and you have to show them what you have. You have to be a man to do it.”

“He’s a joy to coach, and he’s been a big part of what we do on special teams,” said special teams coach Bradley Dale Peveto. “He comes ready to work every day. I sure love having him out there.”

As do the ball carriers in LSU’s backfield. Jordan’s modus operandi is paving a way to the end zone for his teammates.

“If my running back gets 10 or 15 yards after I block for him then that’s a great feeling,” said Jordan.

He should know. He’s done plenty of it.